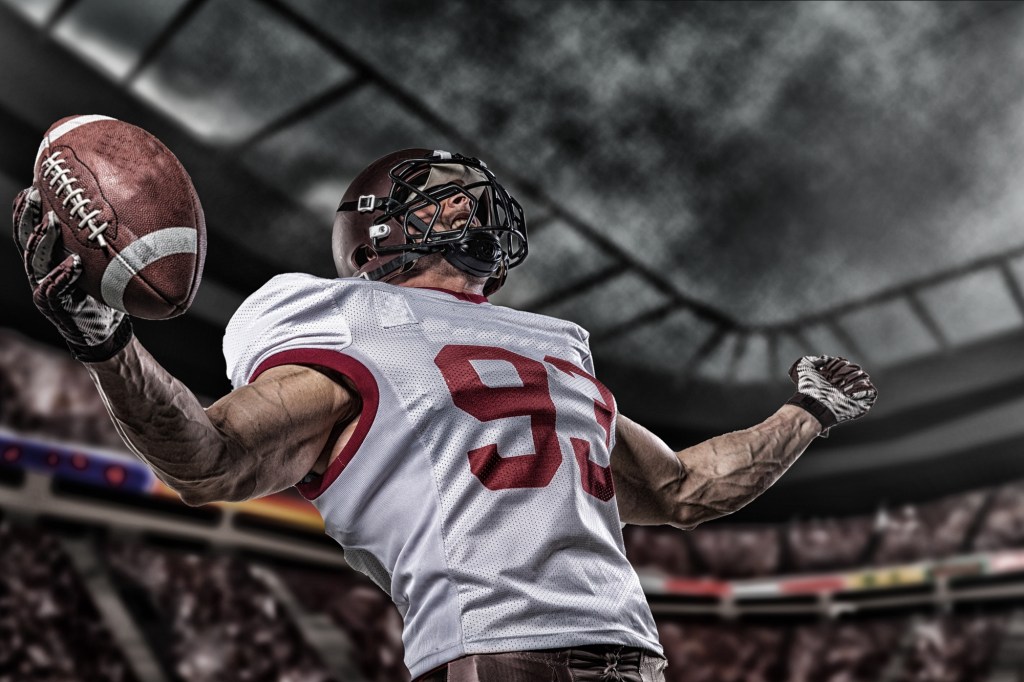 Here it is, the first of our final three NFL Power Rankings and the Top Five appear to be ironclad.

The only concern at the bottom is who is going to screw up their draft positioning the most before the season’s final whistle.

Aaron Rodgers once again took to the Pat McAfee show to share some key words of Covid wisdom, saying, “If science can’t be questioned, it’s not science anymore. It’s propaganda.” Which might sound profound if you didn’t know that it’s a common anti-vaxxer trope and you can buy it on a t-shirt. What it’s really like is if I said I know more about the Packers offensive playbook than Aaron Rodgers because I got to Page 5 on Google. More dumb from the NFL’s poster boy for vaccine stupidity and, probably, it’s MVP. Last week: No. 1

The Chiefs have locked up the AFC West, but they still have a race to the No. 1 seed and first round bye to win. And the Tennessee Titans remain right on their heels. Last week: No. 2

Matthew Stafford didn’t have his best game against the Minnesota Vikings, but the Rams’ defense showed up in a big way. As well as Sony Michel has been running and the offense has put up points, it can’t be understated how well Raheem Morris’ unit has come together in the final month of the season. LA can clinch the NFC West Sunday with a win over the Baltimore Ravens and an Arizona Cardinals loss. Last week: No. 3

The Bucs claimed the NFC South title after knocking off the Carolina Panthers last Sunday for the first time since 2007. It’s something that seems almost inconsequential when it’s not been a full calendar year since they hoisted as Vince Lombardi Trophy. If you needed a refresher on why Bruce Arians’ heart grew three sizes for Antonio Brown, who was on a one-strike policy and had to have whiffed on that since he committed a federal crime by forging a vaccine card, AB caught 10 passes against the Panthers for 101 yards. Last week: No. 4

Dallas dominated the Washington Football Team thoroughly to the tune of a 42-7 lead at halftime. It would have been enough to make your little brother throw his PS2 controller into the drywall. The Cowboys still have a shot at the top seed in the NFC and home field, so they can’t let up against a Cardinals team that hasn’t won in nearly a month. Last week: No. 5

The Titans are the best of a scrum of AFC teams who could win the Super Bowl on the right day and lose to the Jacksonville Jaguars on another. To their credit, they’ve done this well with their best player, Derrick Henry, on injured reserve. There’s a chance, a slight one, that Henry could make his way back to the field by Week 18 or the Wild Card round of the playoffs. If he picks up where he left off, the AFC bracket could be up for grabs. Last week: No. 8

Thanks to a change in the NFL’s Covid protocols once again, there’s a chance Carson Wentz could be cleared to play by the time the team’s game against the Las Vegas Raiders kicks off Sunday. Wentz, who is unvaccinated and doesn’t seem particularly careful according to the Hard Knocks episodes I’ve watched, catching Covid was as unsurprising as it was inevitable. But, hey, at least he’s not on a national podcast talking about taking Invermectin. He’s ingesting his cattle medicine in private at home with his family, including a new born child, that he’s been continually trying to infect. Last week: No. 9

Three consecutive losses somehow still landed the Cardinals in the playoffs, but they have to stop the bleeding soon or it’ll be a short stay. To have any chance at reclaiming the NFC West title, they need to take out the Dallas Cowboys at Jerry World Sunday. Last week: No. 6

With another shot at the rookie led New England Patriots, the Bills made it count last Sunday. In doing so, they all but assured themselves a playoff spot and took over the AFC East. They have two games left to hold it. Last week: No. 12

Cincinnati was completely out of the playoff bracket a month ago. Now, if they win at home Sunday, they’ll claim the AFC North title for the first time since 2015. All they have to do is beat the Chiefs. So maybe next week, then? Last week: No. 14

Since winning a game where rookie QB Mac Jones attempted just three total passes, Jones had 45 attempts against the Colts and 32 against the Bills. The Patriots lost both those games. I think you know what you have to do, Bill. Last week: No. 7

The Dolphins have won seven consecutive games after losing seven straight. They’re the first team to accomplish such a feat and it’s landed them squarely in the AFC playoff mix. To stay there, they’ll have to take out the Titans in Nashville. Last week: No. 15

Jimmy Garoppolo has a thumb injury that could not only cost him his next game, but the next two. And while the 49ers are currently the sixth seed in the NFC, they won’t be if they drop both those games. The Texans have shocked plenty of teams this season, four in fact, and the Rams could be playing for an NFC West title and home playoff game in SoFi in Week 18. Trey Lance better be ready or San Francisco will be watching the playoffs on their Barcaloungers. Last week: No. 10

Lamar Jackson was on the practice field Wednesday, but with a noticeable limp. Jackson is set for “limited participation” Sunday against the Rams, whatever that means. The fact is, if Baltimore doesn’t pull out a victory at home against LA, their season is probably over. Switching between Jackson and Huntley might be a recipe for disaster. Last week: No. 11

A month ago the Chargers obliterated the Bengals and looked like the class of the AFC Wild Card field at worst. Now, after two consecutive losses and one where they were never even in the game against the lowly Houston Texans, they aren’t even in the AFC bracket. Last week: No. 12

The Eagles have put together their best football of the year over the last two months. Their reward will be a thorough ass kicking in the playoffs by the Cowboys, Rams or Buccaneers, but, still. Good for you, guys. Last week: No. 19

The Raiders are the team that just will not go away. They say what happens in Vegas, stays in Vegas, but they may end up taking this show on the road in the playoffs to spite us all. Last week: No. 21

I’ve lost count of the times Baker Mayfield has had the ball in his hands, with plenty of time on the clock and a chance to drive his team down for the winning score only to blow it completely. Last Sunday, against the Packers, he once again didn’t even get the offense past the 50 yard line. There are too many better options than Mayfield in free agency (and trades) this offseason for Cleveland to even consider re-signing him. I’d let him walk right into another team’s empty stadium. Last week: No. 16

Until last week, the Vikings had led every game this season by at least six points. They lost seven of those games. At this point, Mike Zimmer has to be openly campaigning to ownership to fire him. One positive note, it’ll be nice to see Kirk Cousins backing up Matt Stafford in LA in a couple of years. Really shore up the Rams QB room… If the dumbass gets vaccinated. Last week: No. 17

So, according to all the playoff math, there’s a scenario where the Steelers can still sneak into the bracket as the seventh seed. They have to win out against the Browns and the Ravens to have a chance. So, honestly, it’s doable. Last week: No. 18

Regardless of whether the Broncos keep Vic Fangio as head coach (and I see no justification for them to do it), they must go all in on upgrading their quarterback significantly this offseason. That means Russell Wilson, Aaron Rodgers, Deshaun Watson or a surprise contender like Derek Carr. And they need to fire Pat Shurmer and ban him from within 500 yards of the facility. Last week: No. 20

Here’s a fun little Ian Book stat. Former Notre Dame quarterbacks have lost 24 consecutive starts in the NFL. That lineage goes through Brady Quinn, Jimmy Clausen, DeShone Kizer and now Ian Book. The Saints remain in the playoff hunt and they got a gift this week when the Carolina Panthers announced that Sam Darnold would get the start. Last week: No. 22

I know I bring this up a lot, because it seems both dumb and prophetic at the same time that I predicted, back in the preseason, that the Falcons would claim the seventh seed in the NFC. Here were are, with just two games to go and Atlanta still finding absolutely insane ways to lose, and it remains a possibility. Any Given Sunday indeed. Last week: No. 24

The WFT tried to flip the script by bringing their own benches to Dallas Sunday and all they did was surrender 42 points in the first half and see two of their best players exchange punches on the bench. Ron Rivera needs to cut half this team in the offseason. Week 14: No. 23

Just when you want to count the Bears completely out, they start Nick Foles and pull off the upset they always had in them. Of course, we still have to count them out. Math exists, but way to cropdust the league before you take your exit, Matt Nagy. Last week: No. 27

Sam Darnold is back behind center, which means that the Panthers should be behind on the scoreboard from the opening whistle. Last week: No. 25

After securing their first losing season since Russell Wilson was drafted, the Seahawks double their pleasure, making sure they’d have a losing record at home too. No reason to leave the 12th man out of the flaming outhouse. Last week: No. 26

David Culley should have never been hired in the first place, but if he keeps screwing up the Texans’ draft position with meaningless, late season victories, they should ban him from the league. Last week: No. 30

The Jets won the garbage fire vs. dumpster fire match up with the Jacksonville Jaguars last week. Lucky for them, it did no real damage to their draft stock and they still pick No. 4. Still, this is no time to relax. Lose these last two games and seal the deal. Last week: No. 30

It’s been more good news this week on a possible Joe Judge return, which should be bad news for anyone with a rooting interest in the Giants. Last week: No. 28

At this point, the Lions might as well win another game. With a 1.5 game lead on the Texans and Jets, just have fun with it. Run a fake punt on every play. Last week: No. 29

Two weeks to go and the Jaguars will join the 1999-2000 Cleveland Browns and the 2017-2018 Cleveland Browns as the only three teams in this millennium to be awful enough to pick No. 1 overall in back to back seasons. Last week: No. 32

*All odds are as of 12/30/2021 and are subject to change. To find all up to date betting lines and to see the Full NFL Week 17 Schedule please visit BetOnline.AG.

Connect with us our socials on Twitter and Instagram for the latest sports news, viral moments, betting odds and the occasional memes.

(The news and editorial staff were not involved in the preparation of this article sponsored by an advertiser.)