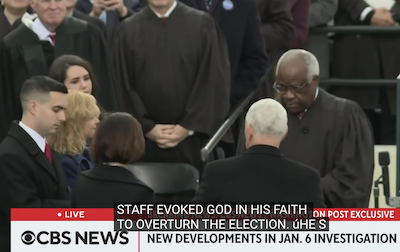 Dan Rather, and probably others, posed the question in ny headline.

It follows news that among the limited material Trump chief of staff Mark Meadows provided to the committee investigating the Jan. 6 insurrection were emails — batshit is I think the correct legal description — from Supreme Court Justice Clarence Thomas’ wife, Ginni.

The conservative activist urged Meadows to take action to overturn the election of Joe Biden — “release the Kraken and save us from the left taking America down,” she wrote.

OK, big deal, diehard MAGA types might say. The spouse of a Supreme Court justice is entitled to his or her opinions.

Justice Thomas alone on the Supreme Court voted against requiring release of presidential records to the Jan. 6 committee. We now have evidence that the material he voted to protect included emails from his wife. Some writing in a critical period after the riot might exist, but wasn’t produced by Meadows. Thomas also voted, unlike the majority of the court, to allow bogus election fraud lawsuits to proceed.

Did the justice know archived material sought by the committee might include messages from his wife?

Should he sit on  further cases related to the investigation or the stolen election argument his wife is pressing at the highest levels of the White House and elsewhere?

Those who believe justice should not only be impartial but APPEAR impartial would say no.

Rather ,in writing how the likes of Alabama’s attorney general are still supporting the false stolen election story to fire up the Trump base, comments:

And this brings us back to Justice Thomas, who, by the way, has apparently been in the hospital for several days with a severe infection and very few updates on the status of his health. Was he trying to protect his wife when he was the lone dissent in a case about handing over documents to the congressional committee investigating January 6? What else might he know? Recusal is a bare minimum. The questions go much deeper.

The Tom Cottons of the world should spare some time from their outrage concerning  overblown or imaginary specks in Judge Ketanji Brown Jackson’s record and direct attention to a far larger problem.

UPDATE: Jane Mayer of the New Yorker reports that legal experts say Thomas should get off future cases involving the presidential election.

As I noted in a recent investigation of Ginni Thomas, Supreme Court Justices aren’t bound by the judicial code of conduct that applies to all other federal judges, which mandates that they recuse themselves from participating in any cases in which personal entanglements could cause a fair-minded member of the public to doubt their impartiality. Yet Justices are subject to a federal law that prohibits them from hearing cases in which their spouses have “an interest that could be substantially affected by the outcome of the proceeding.” The statute, 28 U.S.C. section 455, also requires them to disqualify themselves from any proceedings in which their “impartiality might reasonably be questioned.”

She quotes law professor Stephen Gillers, who until now had supported Mrs. Thomas’ ability to speak out on political matters.

Gillers’s e-mail to me laid out several reasons for why Thomas must now recuse himself from all such cases. Most narrowly, he said, these cases could “lead to discovery” of inappropriate conduct by Ginni Thomas; as her texts with Meadows demonstrate, “she actively insinuated herself in the events through her texts to Meadows, and perhaps more extensively.” Gillers continued, “That’s enough to require her husband to abstain from participation in any case in which her actions might be further revealed.” Justice Thomas, he said, clearly “has an understandable interest in protecting” his wife. For that reason alone, Gillers explained, “his impartiality might reasonably be questioned, which the law says requires recusal.” More broadly, Gillers argued, “Ginni became part of the team seeking to overturn the election. That team expressly identified, as a critical part of its strategy, appeals to the Supreme Court, and therefore to Clarence.” He added, “Ginni chose to make herself part of the story that the Trump side, her side, would then ask the Court, including her husband, to interpret in its favor.”