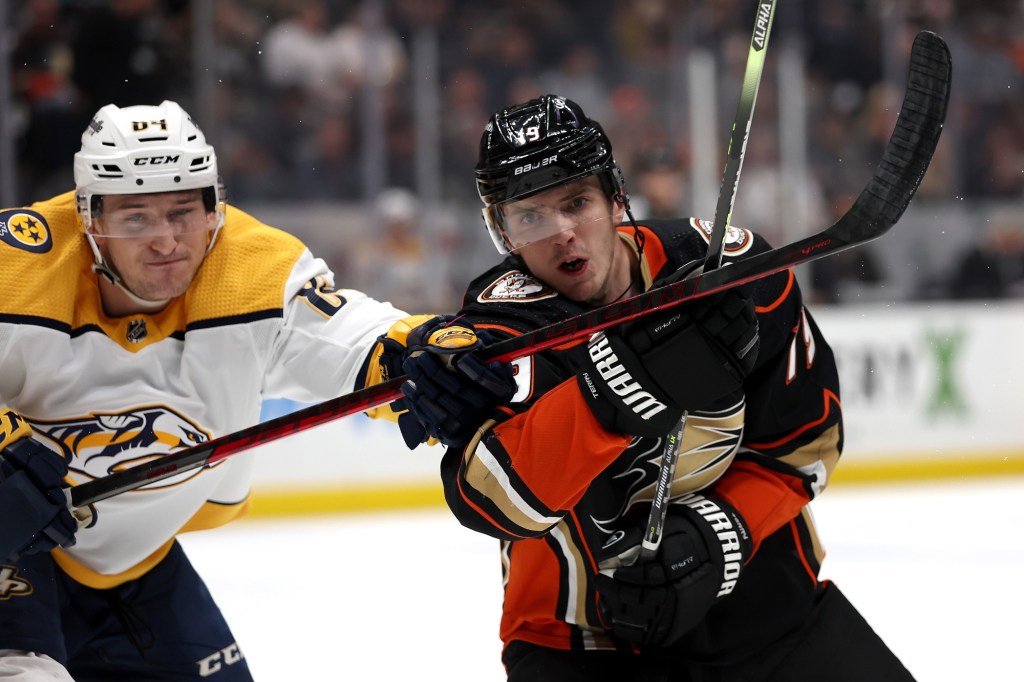 ANAHEIM — Troy Terry made a little magic on the first day of the rest of his and the Ducks’ lives on Monday night at Honda Center, sending a laser past Nashville Predators goaltender Juuse Saros for his team-leading 30th goal, extending his career high and raising hopes an upset was in order.

“Super proud of that kid,” Ducks coach Dallas Eakins said. “Thirty goals for Troy Terry, with all of his ups and downs, I think it’s a great example of being patient with a player and letting him develop. They all develop at a different rate. Troy’s been super urgent with his development.”

However, the suddenly short-handed and undersized Ducks couldn’t match up with the Predators and their winless streak was extended to seven consecutive games with a 6-3 loss, hours after Rickard Rakell followed Nicolas Deslaruiers, Hampus Lindholm and Josh Manson out the door.

Silfverberg’s status was said to be week to week, although he told a team spokesman he hoped to play again before the end of the season. The spokesman said the Ducks’ medical staff was not overly concerned about Silfverberg’s condition, having recognized it in a timely fashion.

Despite the glaring void in the heart of their lineup after the trades, the Ducks came out with a good deal of energy to start the game, with Sam Carrick fighting Nashville’s Tanner Jeannot only 6:11 into the game, after a collision near center ice. Carrick and Jeannot each landed several rights.

Trevor Zegras assisted on the goals by Grant and Terry, his 29th and 30th of the season, tying teammate Cam Fowler’s franchise record for assists by a rookie. Fowler had 30 assists to go with 10 goals as a 19-year-old rookie in 2010-11. Zegras celebrated his 21st birthday on Sunday.

Nashville appeared to take command with two goals in the first 3:08 of the third period, building a 4-2 lead on goals by Filip Forsberg and Matt Duchene (power play). Grant scored an even-strength goal moments after a Ducks power play ended to cut it to 4-3 at 10:13 of the final period.

The Ducks’ rally was short-circuited when Duchene scored a second power-play goal at 11:23, after one of the newest Ducks, Gerry Mayhew, was penalized for tripping 200 feet away from his own net. Duchene’s one-timed shot, off a cross-ice pass from Forsberg, whistled past John Gibson.

“Our penalty kill let us down,” Grant said of giving up three power-play goals. “We’ve been really good. That starts with me on faceoffs. They were able to find seams on us. That isn’t something we’re proud of. It’s tough for ‘Gibby’ in those situations. Our PK let us down and lost us this game.”

Saros and Gibson matched saves for the first two periods before Nashville broke a 2-2 tie in the opening minutes of the third. Saros left the game for a little less than a minute at the 7:11 mark to attend to an apparent equipment matter. The Ducks failed to record a shot on replacement David Rittich.

Forsberg sealed the deal with an empty-net goal that made it 6-3. Then, in a possible sign of things to come with Deslauriers and Manson no longer with the Ducks, Mark Borowiecki needlessly ran into Carrick, igniting a wrestling match and a brief fight with only 1:10 to play.

“I thought we were playing just a hell of a game until their third goal,” Eakins said. “That really deflated us because it was such an avoidable play (a turnover leading to Forsberg’s first goal). Then we picked ourselves up and got back into it again. The difference was a turnover and the special teams.”