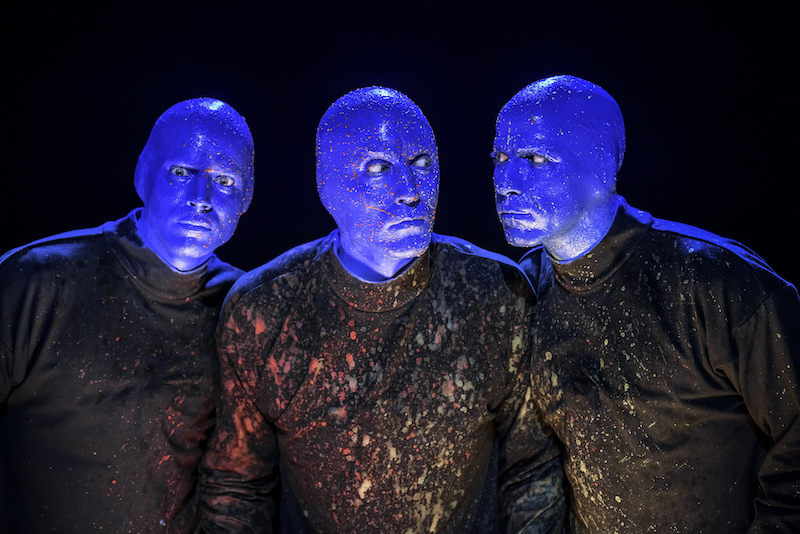 Celebrity Attractions, the company that brings Broadway touring productions to Little Rock, announced its forthcoming season today in a press release in the lobby of the Robinson Center.

While there’s not “Hamilton”-level buzz as was the case last year, the season has runs of “Legally Blonde,” “My Fair Lady,” Disney’s “Aladdin,” “Tootsie,” and three days of performances from the Blue Man Group, all slated for the stage at Robinson Center.

More than 35 million people around the world have experienced the smash hit phenomenon that is BLUE MAN GROUP and now it’s your turn! BLUE MAN GROUP returns to Little Rock for a limited engagement on their new North American tour. It’s everything you know and love about BLUE MAN GROUP—signature drumming, colorful moments of creativity and quirky comedy—the men are still blue but the rest is all new! Featuring pulsing, original music, custom-made instruments, surprise audience interaction and hilarious absurdity, join the Blue Men in a joyful experience that unites audiences of all ages.

TOOTSIE – January 13-15, 2023
Call it “musical comedy heaven” (Rolling Stone). Call it “the most uproarious new musical in years!” (The Hollywood Reporter). Call it TOOTSIE! This laugh-out-loud love letter to the theater tells the story of Michael Dorsey, a talented but difficult actor who struggles to find work until one show-stopping act of desperation lands him the role of a lifetime. Featuring a hilarious Tony®-winning book by Robert Horn and an outrageously clever score by 2018 Tony Award® winner David Yazbek (The Band’s Visit, Dirty Rotten Scoundrels), this New York Times Critic’s Pick is “a joyful delight” (The Washington Post) that’s “so packed with punchlines, it should be called a jokebox musical!” (Bloomberg). “In these turbulent times, with the world out of balance, we need a place to let the good times roll,” raves Rolling Stone, “TOOTSIE is it.”

Discover a whole new world at Disney’s ALADDIN, the hit Broadway musical. From the producer of The Lion King comes the timeless story of ALADDIN, in a thrilling new production filled with unforgettable beauty, magic, comedy, and breathtaking spectacle. It’s an extraordinary theatrical event where one lamp and three wishes make the possibilities infinite. Hailed by USA Today as “Pure Genie-US,” ALADDIN features all your favorite songs from the film as well as new music written by Tony® and Academy Award® winner Alan Menken (Beauty and the Beast, Newsies, Sister Act) with lyrics penned by the legendary Howard Ashman (Beauty and the Beast, The Little Mermaid), Tony® Award winner Tim Rice (The Lion King, Aida, Evita), and book writer Chad Beguelin (The Wedding Singer). See why audiences and critics agree, ALADDIN is “Exactly What You Wish For!” (NBC-TV).

Fabulously fun and international award-winning, LEGALLY BLONDE – The Musical is the ultimate Broadway tribute to Girl Power! The story follows the transformation of Elle Woods as she tackles stereotypes, sexism, snobbery and scandal in pursuit of her dreams, and proves that you can be legally blonde and STILL the smartest person in the room. This contemporary, sassy musical moves at a breakneck pace driven by memorable songs and explosive dances. LEGALLY BLONDE – The Musical warms the heart by proving that self-discovery can be way too much fun and hilarious to boot. Based on the beloved movie, LEGALLY BLONDE – The Musical will take you from the sorority house to the halls of justice with Broadway’s brightest new heroine and, of course, her Chihuahua, Bruiser. “A high-energy… hymn to the glories of girlishness.” – The New York Times

From Lincoln Center Theater, that brought you The King & I and South Pacific, comes “a sumptuous new production of the most perfect musical of all time” (Entertainment Weekly), Lerner & Loewe’s MY FAIR LADY. Director Bartlett Sher’s glowing production is “thrilling, glorious and better than it ever was” (New York Times). “Every so often a revival comes along that reminds you how indispensable great theater can be” (NY1). Boasting such classic songs as “I Could Have Danced All Night,” “The Rain in Spain,” “Wouldn’t It Be Loverly” and “On the Street Where You Live,” MY FAIR LADY tells the story of Eliza Doolittle, a young Cockney flower seller, and Henry Higgins, a linguistics professor who is determined to transform her into his idea of a “proper lady.” But who is really being transformed?“