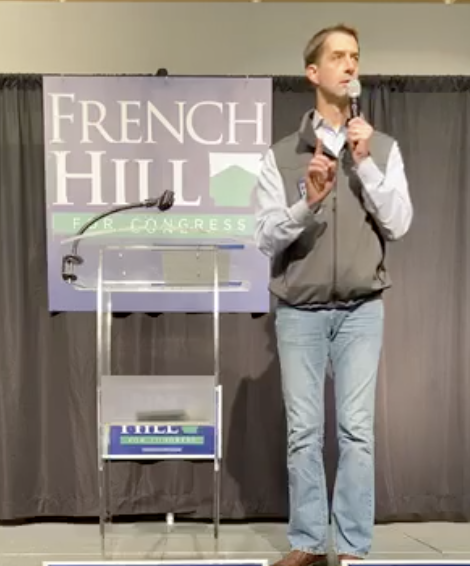 Sen. Tom Cotton will be filing a friend of the court brief in the federal lawsuit over the racial gerrymandering of the 2nd Congressional District by the Republican legislature to reduce the percentage of black voters.

Needless to say, Cotton thinks the lawsuit is without merit. In short, he said the claim about diminishing the power of Black voters is just a cover for Democrats to complain about “partisan” gerrymandering. The courts, unfortunately, have said you can’t challenge redistricting on partisan grounds. That’s just politics at work.

Their Equal Protection claim, although premised on a claim of intentional racial vote dilution, is a thinly veiled partisan gerrymandering claim as evidenced by the fact that Plaintiffs solely refer to allegations of partisan—not racial—intent.

Well, racial discrimination CAN have partisan consequences given that there is voting along polarized racial lines with Black voters inclined to vote Democratic.

But the facts are simple: Republicans altered a perfectly good plan, that presented little peril to the all-Republican House delegation, to move more than 20,000 predominantly Black voters in Pulaski County out of the 2nd District and parcel them out to two other congressional districts. To maintain the proper population in the district, the Republicans moved 20,000 white Cleburne County voters in.

Black voter rights were diminished. On purpose, with malice aforethought. That it has a partisan consequence is only incidental, if also contemplated.

A three-judge panel will decide.