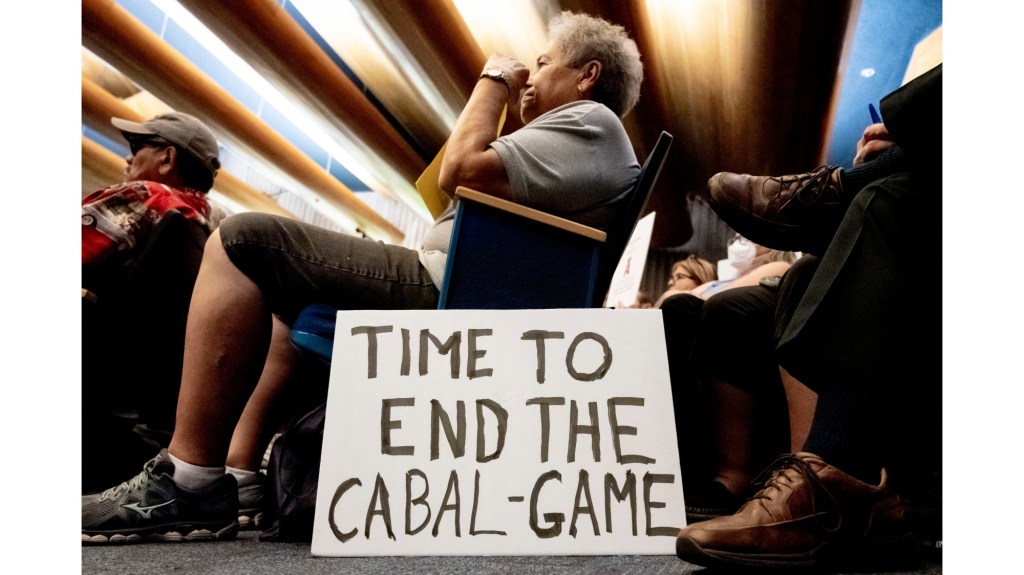 The torches and pitchforks are out in Anaheim. The mayor has resigned.  The city council is in disarray.  But that’s just the headlines over news that the city has been the plaything of major corporations, government unions and consultants. Buried in sometimes obscure city documents is evidence of deeper rot, the effects, you might say, of long-term corruption.

Anaheim’s latest annual financial statement reveals an unrestricted net deficit of $715 million, among the worst of California’s 482 cities. That red ink would require every one of the city’s residents – including children, retirees, and the undocumented – to fork over $2,022 just to balance the city’s accounts. By contrast, the neighboring city of Cypress has unrestricted net assets of $1,816 per resident.

Things are a real mess in Anaheim.

Expect the usual demands to recall members of the city council. Anticipate a lack of leadership and indecisiveness as bickering will dominate the agenda. And expect proposals to raise sales taxes on residents.

Instead of forcing residents to underwrite this fiscal distress that has been building for years, here are the two most powerful things Anaheim can do immediately. City officials all over California should take note.

First, voters will most likely confront the problem of cronyism in the city by raising sales taxes in the Disney-controlled resort zone. For decades, Disney’s control of city politics has shifted its business costs from the company to its residents. Now, let tourists pay higher taxes to pay for the deficit and the deteriorating infrastructure these guests use.  An increase in the hotel tax (transient occupancy tax) for visitors to Disneyland, the Convention Center and the sporting venues would make more sense to Anaheim residents than having themselves assessed. Other tourist attractions around the country charge taxes and fees on top of ticket prices, why not Anaheim?

Second, if Anaheim cannot muster the leadership to divorce itself from Disney and other major corporations, then it can always ask a federal bankruptcy court judge to assist in creating a bailout plan through a Chapter 9 bankruptcy filing. In bankruptcy, the city can renegotiate its obligations – including corrupt deals it made, with Disney’s support, to buy off powerful government union leaders in the city, especially its police and firefighters unions. Together, Disney, government union leaders and officials of both parties ran the city into the ground. Chapter 9 is the opportunity to end their reign over this tragic kingdom.

The city of Stockton used Chapter 9 to eliminate $500 million in retiree medical-benefit obligations.  It also defaulted on its Pension Obligation Bonds, stiffing investors.  That’s what a federal bankruptcy court can do.  Stockton now has a very strong balance sheet.

Perhaps Anaheim could reform the defined-benefit pension plan that is the product of the legal corruption at the heart of its relationship to government unions. It could, for instance, adopt a shared-risk retirement plan – a system in which, like a 401k plan, city employees and taxpayers share in the ups and downs of the city’s investments. The state of Wisconsin followed this strategy and is regularly at the top of annual Pew Charitable Trust lists of the best-funded state pension plans in the nation.

The old Chinese proverb that a crisis is an opportunity lies in front of the city of Anaheim.  It will take strong leadership.  It will take a vision for what a turnaround can fully accomplish.  It will mean extreme pain for the Disney Resort to address the Dumbo in the room. The irony is that Disney’s guests may pay the steepest price. In that case, there will be some justice in the Happiest Place on Earth.

Former state Senator John Moorlach served as Orange County’s treasurer and as a county supervisor. He is a California Policy Center senior fellow.