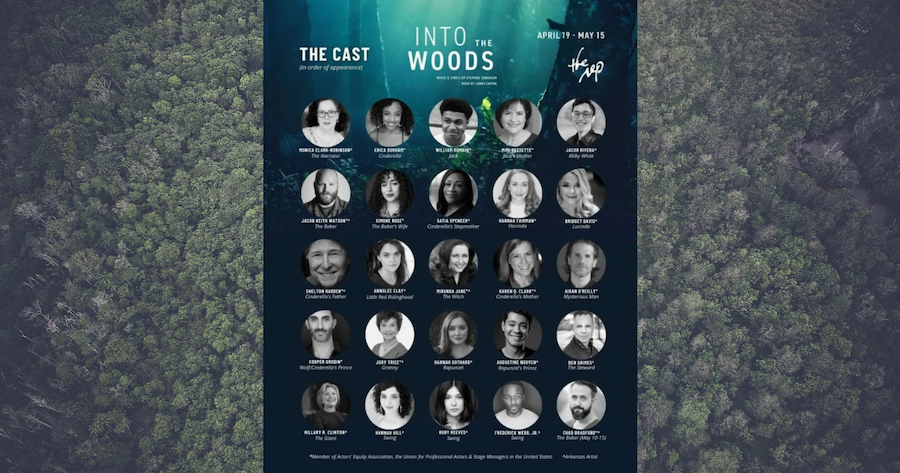 Little Rock, AR — The Arkansas Repertory Theatre is excited to announce that single tickets are on sale for Into The Woods, running April 19-May 15. Single tickets can be purchased online at www.TheRep.org or by calling the Box Office at (501) 378-0405. Groups of 10 or more can purchase tickets at a special discounted rate by calling the Box Office. Into The Woods is the enchanting, brilliant musical that ventures beyond “happily ever after!” Little Red has strayed far from the path, Jack’s found a second beanstalk, Prince Charming’s eyes are wandering, and there’s a Witch living next door. Stephen Sondheim’s most popular musical turns the world of fairy tales topsy-turvy, reminding us that granted wishes often bring complications. Filled with exquisite music and brilliant lyrics, this innovative new production is sure to enchant. Time called the musical “non-stop pure pleasure. A ravishing explosion of color and melody and magic and laughter.”

The Rep’s production will star Jacob Keith Watson (Wynne, Arkansas-native; Broadway: Carousel, Hello, Dolly!, Violet, Amélie, The Phantom of the Opera) as the “Baker”, Ximone Rose (Broadway: Once on This Island) as the “Baker’s Wife”, Miranda Jane (Central Arkansas-native; The Rep: Designing Women) as the “Witch”, Erica Durham (National Tour:
The Color Purple) as “Cinderella”, and will feature Hillary Rodham Clinton (former United States Secretary of State, former United States Senator, and former First Lady of the United
States) as the “Giant”.

The production will also feature guest artists Mimi Bessette (Broadway: Bonnie & Clyde) as “Jack’s Mother”, Cooper Grodin (National Tour: The Phantom of the Opera, Les Misérables;
The Rep: Mama Mia!) as “Cinderella’s Prince/Wolf”, and Aidan O’Reilly as the “Mysterious Man”. The production will be directed by Addie Gorlin-Han, music will be directed by Arkansas
artist Michael Rice, choreography will be Arkansas artist Dorse Brown, scenery and costumes will be designed by An-Lin Dauber, lighting will be designed by Bill Miller, and sound will be designed by Michael Costagliola. Casting for the Arkansas Repertory Theatre’s production of Into The Woods was by Jason Styres.

Performances run April 19-May 15, 2022, Tuesdays, Wednesdays, and Thursdays at 7 p.m., Fridays and Saturdays at 8 p.m., and Saturdays and Sundays at 2 p.m. The full schedule of
performances and COVID-19 Safety Protocols can be found at www.TheRep.org. At all performances, all patrons will be required to present a negative COVID-19 test result obtained no more than 72 hours (3 days) of the event, or patrons may volunteer their proof of vaccination dated at least 14 days prior to the event. Negative test results or proof of vaccination must be dated with your full name matching your ID. Either a physical copy or photo of a physical card/test result will be accepted. While concessions will be allowed in the auditorium, patrons will be required to wear masks at all times while in the building, except when actively eating or drinking.

ADDITIONAL “PAY-WHAT-YOU-CAN” NIGHTS FOR INTO THE WOODS

The Arkansas Repertory Theatre is excited to announce additional nights for “Pay-What-You-Can” preview performances for Into The Woods. Patrons are invited to the first Tuesday, Wednesday, or Thursday preview performances by paying any amount they wish for tickets. Tickets must be purchased in person at the Box Office at 601 Main Street on April 16 from 9 a.m. to 10:30 a.m. (please note this is a change from previous procedures). For each show, there will be 150 tickets available for purchase across all three performances. Tickets are limited to two per person and are first-come, first-served. Saturday, April 16 – 9:00 a.m. to 10:30 a.m. Into The Woods “Pay-What-You-Can” preview performances are sponsored by Arkansas Democrat-Gazette.