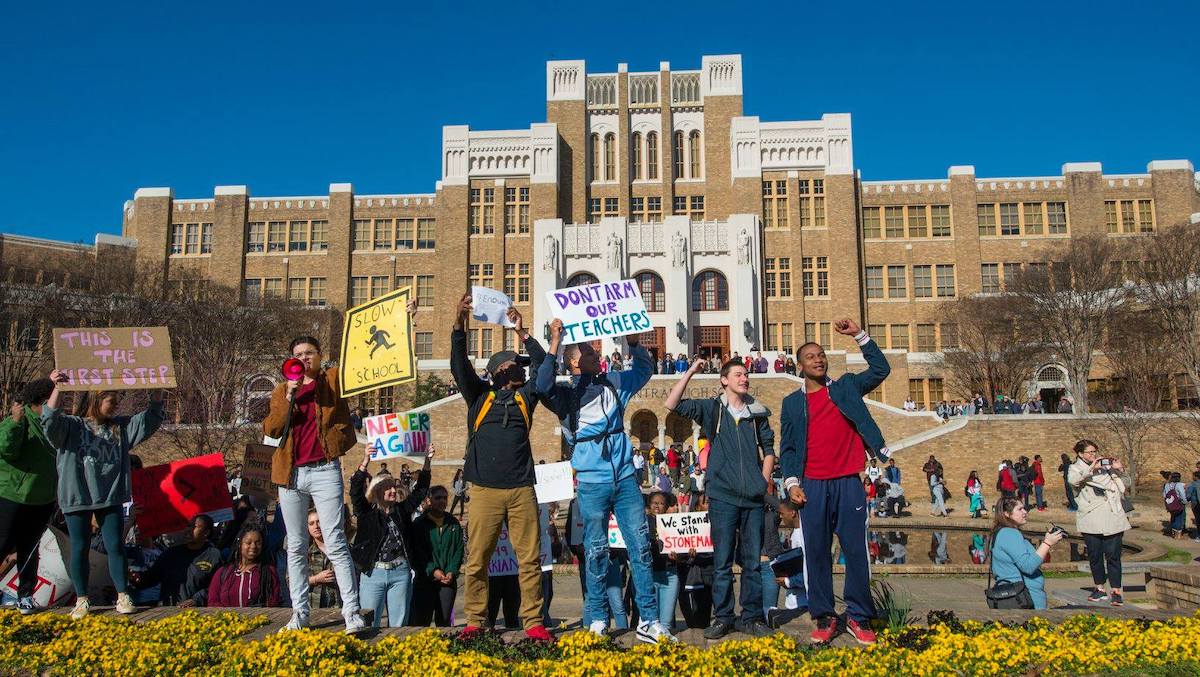 It was around 11:30 Saturday morning. My eldest son and I were in the front yard. He was helping me wrap up a weekend honey-do project, when I heard it. Tat, tat, tat, tat… the distinct sound of 15 shots fired.

A bright, beautiful morning. A three-day weekend. The first weekend of summer break. It must have been only a handful of blocks from where my son and I stood. The Uvalde and Buffalo mass shootings still fresh in my daily mullings, I felt the electricity of fear stem out to my fingertips. All I could do was to think about how quickly I could protect my son, the others around me, innocent bystanders in a society plagued by gun violence.

We would learn shortly thereafter that Chloe Alexander, a 7-year-old girl visiting the zoo, was murdered in a drive-by shooting. I’m not ashamed to say my thoughts and prayers immediately went to that little girl, her loved ones, the other families simply spending a Saturday morning at the zoo, the law enforcement officers at the scene, the people traumatized by this part of our culture, and even the person who shot the weapon for whatever led him to that choice.

I was stunned at that moment, but not shocked. It wasn’t the first time I’ve heard gunshots in my neighborhood, near my downtown office. Not the first time I have stopped mid-step and prayed for those on either side of the gun, but it is also likely not the first time those children at the zoo were exposed to gun violence. In Little Rock, gun shots are a constant. Whether we still notice them is the question. But we can’t afford to lose touch with our humanity, to become desensitized. We must reflect on these moments as often as possible. And we most certainly cannot stop praying for these people and for a solution.

But it’s also true that we must not stop there. A 7-year-old girl was murdered. Her only crime: going to the zoo with her family.

Every day, I walk my 9-year-old son to school. As I turn to go, I tell him, “I love you. Do good.” I can’t imagine that being the last time I saw him.

My fear is nothing compared to what Chloe certainly felt, what her family felt, what the other families at War Memorial and the zoo felt. My fear will never compare to the teachers wondering if their students will become a target. I will never understand the fear of a law enforcement officer called to the scene of a murdered child, terrified that child could be their own. And now the Washington gun lobby wants to “harden targets?” What do they want us to do, give guns to giraffes? Arm zoo keepers? Chloe did nothing wrong. Suggesting more guns would have saved her life, suggesting her death is a learning experience, is shameful.

The fear I grapple with is also nothing compared to what our children are going through. Kids are watching us fail them, over and over. They cannot be kept from the damaging outcomes of drills and the ever-present, ever-evolving news of carnage. Just like the breaking news scroll at the bottom of the screen … over and over and over and over … .

I can’t decide what is more alarming, the sound of those gunshots or the sound of silence coming from those able to do something about gun violence in this country. The career politicians in Washington and those here at home — you know them, the same ones elected over and over but never making a bit of difference — their silence is deafening.

And it would be so easy to take the first step. More than 90% of Americans, including law-abiding gun owners like myself, agree that background checks and red flag policies are reasonable gun safety measures that in no way threaten our Second Amendment rights. That’s right, 90%. But you’ll never hear those sorts of numbers from the big gun lobby and their paid-for politicians. They would rather have us believe any protection against some is a 2nd Amendment violation to us all.

Passing these commonsense protections takes very little political courage. And yet, those same career politicians won’t budge. In fact, when asked just last week, every single United States senator who voted no on a background check bill the House had already passed offered the same tired excuses. The favorite seemed to be that “it wouldn’t have made a difference in Texas.” The same lines we hear from the Arkansas Legislature after every mass shooting. It’s almost as if they’re operating from the same do-nothing playbook.

If just one shooting can be prevented, isn’t that enough? At a time when Americans can agree on little, can’t we all agree that it’s time for sensible safety measures? These victims aren’t just numbers, these are people.

The political games in Washington, and frankly even here in Little Rock, are part of the reason nothing changes. Whether it’s the stranglehold lobbyists and interest groups have over our elected officials or political pandering for power that holds them back, we cannot trust politicians to put us first. We have to send a message that if politicians hope to remain in office, their priorities need to change.

That message: We demand that elected leaders step up and do something about gun violence. We demand commonsense measures. The lives of those innocent shoppers in Buffalo mattered. The lives of the children and their teachers in Uvalde mattered. Chloe Alexander’s life mattered. So let’s hold our elected officials accountable for their actions, and their inaction. They must fear losing their office. We will fire you if you don’t abide by the will of the people.