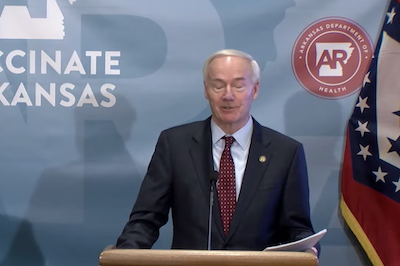 The governor presented COVID numbers at his weekly news briefing today. They continue to drift downward. Vaccinations remain too small to have a great impact.

But the pressure on hospitals is declining.

The governor predicted more days with higher death counts and acknowledged the positive testing rate remains high, at 17 percent by his figures. He and Dr. Jennnifer Dillaha emphasized the value of vaccines on reducing the severity of COVID infections.

He opened his news session with the announcement that he supported a 498-bed expansion of the North Central unit of the prison system at Calico Rock. He’d rely on the state’s billion-dollar surplus to pay for a cost expected to fall somewhere between $60 and $100 million. Construction would begin in 2023, contingent on legislative approval.

He said a dip in prison population owing to the pandemic had ended and prison population was rising, along with an increase in the state population. He put growth at more than 1 percent a year and said the projections expect some 3,000 more inmates in 10 years.

He’s spent $50 million in prisons during his seven years in office. But now, he said, more building is needed. He contended the construction also was accompanied by changes meant to divert inmates to the parole system, but it hasn’t been sufficient.

No mention was made today about studying how prison space is used. One chart he displayed shows parole violators account for the biggest portion of prison admission.

He said more state prison space could alleviate a backup of state prisoners in county jails and allow them space to hold misdemeanor offenders. Again, no mention of whether there should be a long look at local jailing practices. A good example today could be found in the Supreme Court ruling upholding the punitive jailing practices of a White County district judge, for such things as failing to pay fines people couldn’t afford to pay, including under the criminal eviction statute.

During a Q&A session with reporters, the governor said he saw nothing to change his expectation that the prison population would continue to grow. No. If you keep doing the same things the results aren’t likely to change. No mention, for example, of adequate funding for public defenders who could perhaps win some leniency or alternative sentencing for defendants.