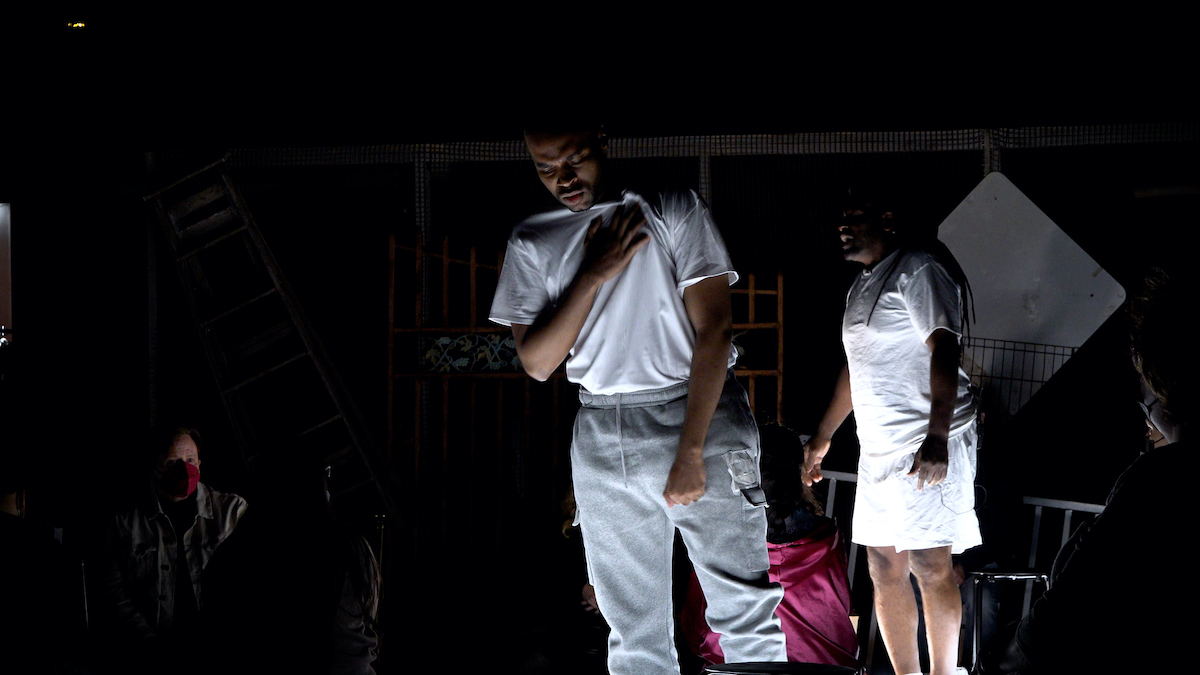 An immersive play went up in Fayetteville this weekend, plunging audiences into the deep end of our prison system. “The BOX,” written and performed by formerly incarcerated individuals, takes place in the solitary unit of an unnamed prison where men are confined 23 hours a day in 6-by-9-foot cells. The play’s aim: to underscore both the horrors of solitary confinement and the humanity of those subjected to it. It now heads to St. Louis, Chicago, Detroit, Philadelphia and other cities.

“The BOX” was written and produced by author and journalist Sarah Shourd, who was held in solitary confinement as a political hostage in Iran for over a year. Upon her return to the U.S. in 2010, she became an outspoken critic on the use of solitary and began an investigation into isolation in U.S. prisons. Shroud wrote “The BOX” based on her findings.

“The message is clear. We need each other as much as we need fresh air, food and water. We need each other to survive,” Shourd said in a press release. “I collected the stories you will witness [in the play] from people trapped a decade ago in the hellish deep end of our country’s prisons. Now in a cruel twist of history, there could not be a more powerful moment to bring their stories back.”

The tour came to Arkansas last weekend in partnership with DecARcerate and Arkansas Justice Reform Coalition, two groups working to end mass incarceration in the state.

“I think solitary confinement, perhaps outside of the death penalty, is the worst thing that we can do to another human being,” Zachary Crow, executive director at DecARcerate, said. “It’s recognized by the United Nations and other human rights groups as a form of torture. And this is happening in really extreme ways right here in Arkansas, but it’s largely hidden from public view.”

On the global stage, the U.S. incarcerates more of its population than any other nation and accounts for around 20% of the world’s prison population. On a state level, the Arkansas rate of incarceration is even higher than the national average, at around 942 per 100,000 people.

Data on solitary confinement in Arkansas is somewhat limited, though DecARcerate co-authored a report on the subject with Disability Rights Arkansas in 2021. They found that according to the ASCA-Liman survey, Arkansas, as of 2019, had the highest prison population in restrictive housing of all states that took part in the survey. Restrictive housing as defined by the Arkansas Division of Corrections is synonymous with solitary confinement. The ADC has said they actively work to limit the use of restrictive housing, but DecARcerate insists it’s not enough.

One of the main reforms DecARcerate seeks in Arkansas is accordance with the United Nations Mandela Rules. These are the U.N. recommendations for the treatment of prisoners, which require that solitary should be used only as a last resort, and never for a period of time exceeding 15 consecutive days.

Cast of “The BOX”

“Solitary is like a never-ending nightmare. You can never decipher what time of day or night it is or when your nightmare may end. It feels as though it’s one dark, lonely, dismal walk with no sight of light or reprieve at the end of the tunnel,” Lauren Nicks, a solitary survivor and Movement Builder at DecARcerate, said in a press release.

DecARcerate and Arkansas Justice Reform Coalition both hope to dramatically reshape incarceration in Arkansas, but one of the first steps is reducing the use of solitary confinement to a minimum. Their plans for education and policy change align with The End of Isolation Tour’s goal to shift perceptions and policies through drama and artistic ritual. The hope is that the play will make visible an issue that is often swept under the rug.

“The primary reason we wanted the show to come is because we’re trying to address criminal justice reform on many different levels, and we believe art is one avenue of expression that can maybe touch somebody when just empirical data might not,” Jon Comstock of Arkansas Justice Reform Coalition said.

“I don’t think there’s any way that you will leave and not think about this in a way that you’ve probably never thought of before. It’ll be an eye opener,” Comstock said.