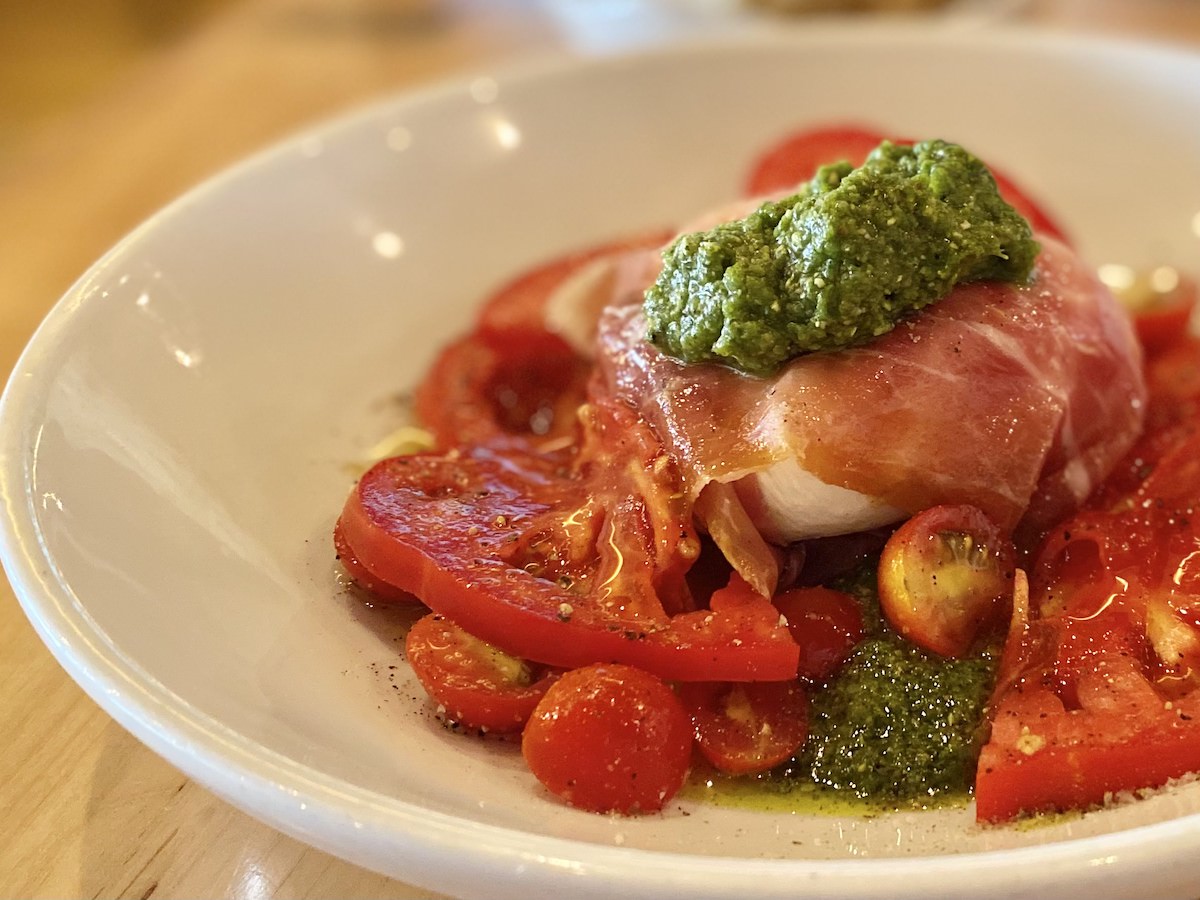 I often find myself at my desk at 2 or 3 p.m. drinking old coffee, still working on my first assignment of the day, bummed that I haven’t figured out a way to fit lunch into my schedule. Meanwhile, my coworkers are efficiently plowing through interviews and stories, having already smoothly and effortlessly planned and executed their lunches, sometimes so stealthily that they come and go without anyone knowing.

“I’m worried about your health,” editor Lindsey Millar often tells me as he finishes off a Three Fold salad or some rainbow trout from Flying Fish.

On Wednesday I saw an enticing food selfie of a burrata topped with pesto and surrounded by a slew of local heirloom tomatoes from Cash Ashley, head chef over at Raduno.  I decided, you know what, the hell with assignment number one, I’m going to lunch today.

Then I realized that Raduno didn’t open til 4:30, so, once again, I waited. When 4:15 finally rolled around I announced to my coworkers I was going to lunch but they were too busy to care.

The wait was worth it. The restaurant had that warm, just-opened, calm-before-the-storm vibe. Lots of sunlight beamed in through the windows. The A/C was cranked. It felt so nice to be there and not in the office.

Despite how annoying it probably is, I find myself ordering from food selfies a lot these days. I’m a sucker for ads, and in 2022, a good food photo shared from a restaurant on social media is the best ad. It’s free and it works. And if I hadn’t mentioned the selfie, the waitress wouldn’t have known to correct me because I wrongly ordered the caprese burrata. I’m sure that would’ve been fine, but the photo Cash Ashley shared was actually a prosciutto and pesto burrata with local heirloom tomatoes from Armstead Mountain Farms, cherry tomatoes from Barnhill Orchards, jalapeno pesto, cracked black pepper. It’s served with slices of Boulevard’s baguette.

It’s a vibrant dish that you almost feel guilty about destroying with your first bite, which I decided to take in sans bread. I sliced a little bit of the fresh mozzarella, a dab of fresh-out-of-the-food-processor pesto, a sliver of proscuitto, a slice of heirloom and a cherry tomato. “Oh wow,” I said aloud. It’s was one of my favorite bites of the year, no joke. Everything was so fresh and those Arkansas tomatoes were bursting with fruit flavor. I started making little toast bites, working my way through the ball of creamy mozzarella and the all of the tomatoes. It’s probably meant to be a shared app and I devoured it.

The waitress was a pro and talked me into dessert. I had the bread pudding with candied walnuts and a seasonal jam (I think it was raspberry) à la mode with Loblolly vanilla that had ice cream vapor floating around it. Bread pudding can sometimes be too moist, but this bread pudding has a soft texture that’s still firm. The jam, walnuts and ice cream took it to another level. So good. RB

As for the libations …

Until we can round up a list of all the great horchata in Little Rock, know this: there’s a delightful glass of it waiting for you at Mar y Tierra if your work commute takes you through the state Capitol area. A more discerning horchata lover could probably tell you whether theirs is made from scratch or from a powder, but I’m good either way. Until we start seeing consistent daytime highs below 90 degrees, this tall, liberally iced, milky, lightly spiced rice-and-nut concoction is all I want to drink, and it’s light enough to have more than one glass if you’re feeling it. SS

My friend Andy Stone, bartender over at Cypress Social, is who I turn to when I have any questions about cocktails or spirits. He trained me as a bartender when I worked at The Fold and somehow didn’t unfriend me when I turned out to be the worst bartender in Little Rock. This week he made me an Americano cocktail with Byrrh Grand Quinquina (an amaro, aperitif, vermouth spirit) and Pilla Select Aperitivo (Italian aperitif).

An Americano is typically Campari, sweet vermouth and soda. The Pilla Select is a delicious Campari adjacent aperitif, Stone told me. The Americano is served with a lemon twist, which really heightens the senses as the drink approaches your mouth. It was so refreshing on a humid night, the perfect balance of bitter and sweet. I’ll want one all the time now. RB