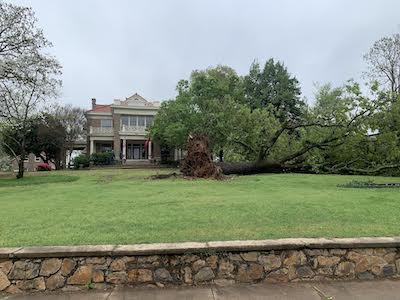 Sad news about today’s storm. The microburst claimed one of my neighborhood’s best trees, a historic giant that graced the front lawn of a historic home on Hill Road.

I talked briefly with the owner of the home, former state Sen. John Pagan, who bought the home last year after it had been in the hands of the same family for more than a century.

He couldn’t say for certain the tree dated to the home’s building in 1910, but it was an old one, he said.

Somewhere in the fallen tree is a gnome that roosted in a small hollow at the base. Perhaps when a tree company removes it tomorrow it will be saved.

In happier times, a shot from Google street view:

By the way, invaluable architectural historian Jim Pfeifer has info about this home’s long history here.