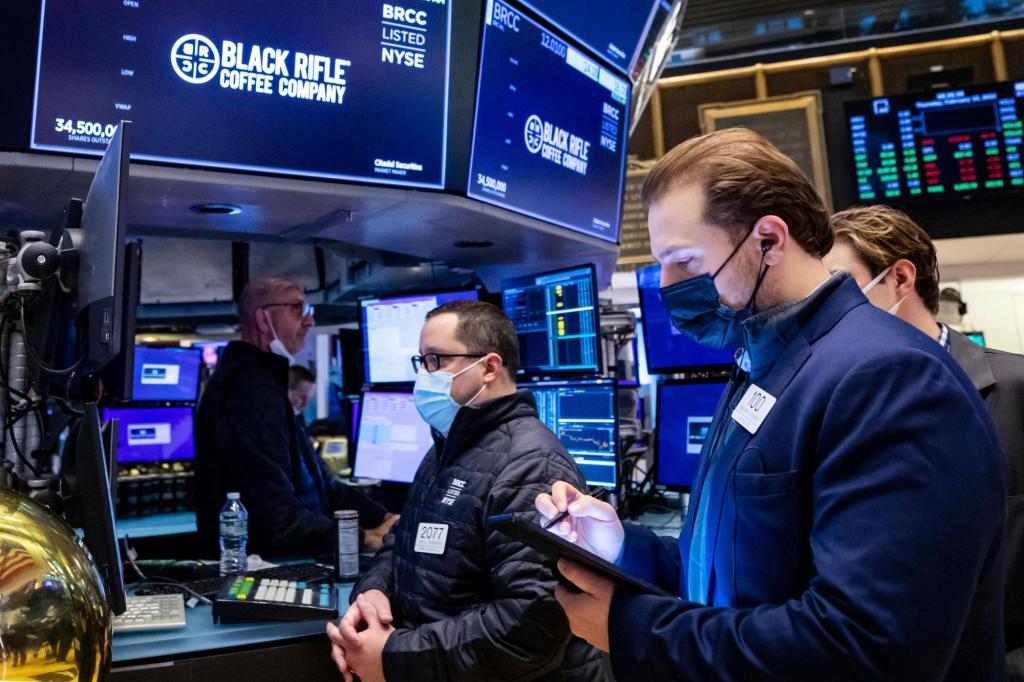 NEW YORK (AP) — Stocks slumped and bond yields moved sharply higher after a hot reading on inflation led to greater expectations that the Federal Reserve will have to move forcefully to cool down the economy by raising interest rates. The S&P 500 gave back 1.8% Thursday and the yield on the 10-year Treasury jumped above 2% for the first time since the summer of 2019. That came after the government reported that consumer prices jumped at an annual rate of 7.5% last month, the fastest pace since 1982. The big swings marked a return of the volatility that has shaken markets in recent weeks.

THIS IS A BREAKING NEWS UPDATE. AP’s earlier story follows below.

NEW YORK (AP) — With inflation going only higher, stocks fell on Wall Street Thursday as expectations build that the Federal Reserve will have to get more aggressive about removing the tremendous support it’s given the economy.

The hottest inflation reading since 1982 sent the S&P 500 down 1.7% in afternoon trading. It also sent Treasury yields jumping, as traders built up bets the Fed may have to apply the brakes to the economy with a bigger-than-usual hike in interest rates next month. The yield on the 10-year Treasury topped 2% for the first time since August 2019, according to Tradeweb.

Stock prices swung immediately after the report, which was even hotter than economists expected. At the start of trading, sharp slumps for tech stocks sent the S&P 500 down, following the usual playbook when expectations build for rising rates. Stocks then pared losses only to slip again.

“We caution that markets could remain choppy for the coming months until either inflation stabilizes or the market is comfortable that the Fed is doing enough, but not too much,” said Matt Peron, director of research at Janus Henderson Investors. “The margin of error for the Fed is getting smaller, but our base case is that the markets will stabilize in the second half of this year.”

Inflation has been building over the last year as the economy roared back from the pandemic. Supply shortages and snags in global supply chains also pushed inflation higher, and prices at the consumer level were up 7.5% last month from a year earlier.

The strong jobs market and high inflation have forced the Federal Reserve to make a hard pivot, and it’s said it’s ready to begin removing the massive aid it’s poured into financial markets. Such moves to raise interest rates could rein in inflation, but they would also put downward pressure on all kinds of investments, from stocks to cryptocurrencies.

Following the inflation report’s release, traders see a 94.7% chance that the Fed will raise short-term interest rates by half a percentage point at its meeting next month, double the traditional move. A day earlier, those same traders saw just a 24% probability of such a big move, according to CME Group. Whatever its size, it would be the first increase since 2018.

In the bond market, yields were jumping most for shorter-term Treasurys. The two-year yield leaped to 1.56% from 1.36% late Wednesday, a notable move. It tends to track expectations for Fed movement.

The 10-year yield also rose, up to 2.03% from 1.93% after earlier topping 2%, but not by as much as the two-year Treasury. It tends to move more on expectations for future inflation and economic growth.

“The fixed-income market itself has been flirting and really trying to break through that psychological 2% level, and it did so today,” said Megan Horneman, director of portfolio strategy at Verdence Capital Advisors.

Energy stocks, which can benefit from higher inflation as energy prices rise, and raw materials companies held up better than other sectors.

The Walt Disney Co. jumped 3.9% after it reported a rebound in theme-park attendance last quarter and said it added more subscribers to its Disney+ streaming service than analysts expected. Both its profit and revenue for the latest quarter topped Wall Street’s forecasts.

If companies can keep growing their profits, their stock prices could continue to rise even if higher interest rates limit how much stock investors are willing to pay for each $1 of earnings.

That’s why one of the big questions on Wall Street is how companies will navigate the higher inflation sweeping the world.

“While it’s easy to respond to inflation by putting up the prices, there is clearly __ as there is broad-based inflation __ going to be a squeeze on real incomes in a number of countries,” Quincey said Thursday during a conference call with investors. “We do not want to lose customers.”

Coca-Cola rose 0.6% after it reported stronger profit for the latest quarter than expected.

Cereal maker Kellogg expects to see double-digit inflation for ingredients as well as packaging cartons and cans this year. The company is also raising prices to offset the impact. Its shares rose 3.2%.