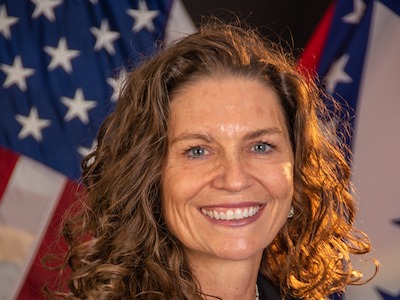 State Police Capt. Stacie Rhoads filed a civil rights lawsuit today complaining of discrimination in her effort to be promoted to major and commander of the agency’s criminal investigation division.

Her attorney is Tom Mars, who’d earlier called for the resignation of State Police Director Bill Bryant for manipulation of the promotions process.

Bryant is the sole defendant in the case, which was filed in Pulaski Circuit Court and assigned to Judge Tim Fox.

It is filed under the state civil rights law and alleges “reverse discrimination” — that Bryant and his command staff worked to pass over Rhoads for promotion in favor of a Black candidate.

Rhoads and Capt. Paulette Ward are both seeking promotion to major. The State Police Commission supports Rhoads, while Bryant has been pushing to promote Ward. The matter has been pending for months though a decision might come during the executive session of a Commission meeting Thursday. The lawsuit claims the commission has twice blocked Bryant’s effort to promote Ward rather than Rhoads.

In an earlier letter about the matter, Mars said Rhoads was facing retaliation for expressing an opinion that the criminal investigation decision wasn’t trained to take up a newly assigned duty of reviewing troopers’ use of the “PIT” maneuver — a controlled collision — to end car chases. He also said a negative evaluation of her by a supervisor for responses “driven by emotion” was a classic example of gender discrimination.

Governor Hutchinson has gotten publicly involved in the matter, expressing an objection to Mars interjecting himself in the promotion process. Mars once worked for Hutchinson in the U.S. attorney’s office in Fort Smith. The governor defended Bryant in an interview with KARK’s Mitch McCoy who broke the story about Mars’ letter calling for Bryant’s resignation. The governor also noted that Rhoads is white and Ward is Black.

The suit said the governor lobbied police commissioners to support Bryant’s choice of Ward and also said Bryant had been quoted as twice telling the State Police
Commisisonrace was a factor in his choosing Ward for the promotion.

The matter has simmered for weeks and reached the highest level of the Department of Public Safety, of which the State Police agency is a division.

Rhoads’ lawsuit contains a broad range of allegations, including claims of disparaging remarks Bryant has made in front of other officers about Black, Latino, and gay candidates for promotion. It also said Rhoads had been falsely accused of losing a piece of evidence, a rifle, and accused State Police of misrepresenting Ward’s record to include past military service, when it did not.  (Her husband was a veteran, which entitled her to some points in promotion consideration, but not as many as being a veteran, which Rhoads is.)

The suit also alleges Bryant expressed reservations about a part-time administrative employee after he learned she’d made comments supportive of the Black Lives Matter movement. The suit quotes him saying he “didn’t want a Black Lives Matter plant in the building.”

It recounts a history of the agency dealing with discrimination complaints since the 1970s, including a series of settlement agreements over federal cases. Despite that, the suit says, the agency hasn’t implemented an affirmative action plan and promotions have become unilateral decisions of the director. It said many were based on cronyism and other ” improper considerations without regard to merit, experience, qualifications, or the statutory preference to which veterans are entitled.” Particularly important to Bryant, the suit said, is whether a candidate for promotion has been a “team player.”

When the State Police became part of the Department of Public Safety as part of Hutchinson’s reorganization of state government, DPS developed personnel policies, but, the suit said, Bryant continued to act as though “nothing had changed.”

The suit described a process in which Rhoads was promoted to captain in a series of changes meant to prepare for the retirement of the commander of CID. Indications were that Rhoads was the favored candidate over others, including Ward, who worked in the professional standards division. By Mars’ account, Ward was initially judged unqualified.

But, the suit continues, Bryant and Hutchinson decided it would be “beneficial” to appoint an African-American to a top position. Hutchinson is widely presumed to be angling for a run for president or at least a position of national prominence when his second term as governor ends this year. To accomplish this, Mars said, Bryant had to discredit Rhoads. Thus the criticism of her as overly emotional in objecting to a change in responsibility for evaluating trooper use of the PIT maneuver. The lawsuit details some division in ranks over changes in the PIT policy and some confusion about what CID would investigate — all intentional uses of the maneuver or just cases that resulted in death or serious injury. By the lawsuit’s account, Rhoads was “berated” by superiors for pointing out a need to clarify language in the policy change, but troop commanders were complimentary of her work. Subsequently, certain assistant commander duties assigned to Rhoads were removed and Ward got a lateral transfer into the job, which positioned her for consideration for the commander’s job.

For a time, the lawsuit recounts, all CID personnel were directed not to communicate with Rhoads.

The suit gives this account of a Commission meeting on the promotion, in November.

Despite Capt. Rhoads having five times more CID experience than Capt. Ward – not to mention that she was a graduate of the FBI’s prestigious National Academy and that her personnel file reflected an extraordinary list of accomplishments in CID – Col. Bryant desperately tried to rationalize his recommendation while avoiding mention of anything factual in the two candidates’ personnel packets. After listening to the unpersuasive arguments Col. Bryant put forward to justify his recommendation, a straw vote showed that five of the Commissioners were adamantly opposed to promoting Capt. Ward. Those Commissioners made clear to Col. Bryant that, based on their merits-based evaluation of the two candidates, they would not approve the promotion of Capt. Ward to become the Commander of CID. The Commissioners and Col. Bryant then left executive session and returned to the Commission meeting room, where the meeting was called to order at 10:20 a.m. and concluded with no discussion about the status of the vacant Major position in CID.

The suit goes on to describe lobbying by the governor, which reportedly left the commissioners unmoved.

A December commission meeting essentially repeated the November meeting, with no action on the promotion as commissioners again resisted Bryant’s effort to promote Ward. No action was taken in January or February, but the lawsuit reports a letter from Commission Chair Steve Edwards acknowledging the letter Mars had sent about the matter. He said it “opened our eyes to several things that need attention.”

The lawsuit concludes that, but for race, Rhoads would have been promoted. She had superior qualifications, it says.

On both November 10 and December 9, 2021, the Defendant tacitly acknowledged that his refusal to promote the Plaintiff was based on the fact that she is white, the other candidate is black, and that he wished to be remembered as the ASP Director who promoted the first black woman to the rank of Major.

The suit asks for a jury trial; back pay to November 2021; an injunction to prevent retaliation against Rhoads, and attorney fees.

I’ve asked for comments from the governor and the State Police.

Colonel Bryant has received a copy of the lawsuit and will be in touch with the Arkansas Attorney General’s Office. Until an attorney is assigned to the case and has the opportunity to meet with Colonel Bryant to discuss the allegations and whether to publicly respond to questions, we will not offer any comment related to the case.

From a spokesman for the governor:

The governor does not have a comment at this time.