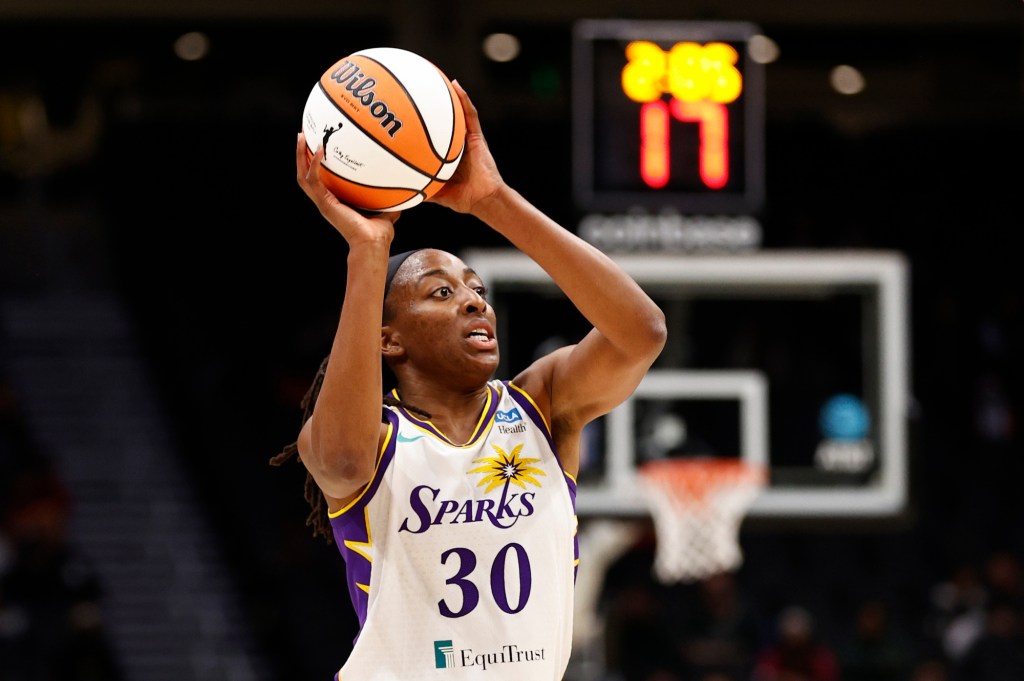 LOS ANGELES — The Sparks escaped with a much-needed victory Tuesday night – if not many fingernails left to chew on.

That quintessential Nneka line: 9 for 13 from the field for a team-high 21 points. The former league MVP was also 1 for 1 from 3-point range and 2 for 2 from the free-throw line – those foul shots coming with 10.2 seconds left to help lock up the win for the Sparks (6-9) on Tuesday night before a crowd of 3,745 fans at Crypto.com Arena.

Elsewhere in the WNBA on Tuesday, the Chicago Sky came back from a league-record 28 points earlier in the evening in Las Vegas. Not long afterward, in Los Angeles, the Mystics erased almost all of the Sparks’ 14-point fourth-quarter advantage, whittling the advantage to 80-78 with 24 seconds left after a pair of Ariel Atkins free throws.

Natasha Cloud then fouled Jordin Canada, who buried her free throws before Cloud knocked down a 3-pointer to trim the lead to the narrowest of margins: 82-81, with 13.3 seconds to play.

Nneka Ogwumike pushed the lead back to three points with another clutch pair of free throws.

It came down to more free throws to decide it after Cloud put up a 3-pointer over Brittney Sykes, who was called for a foul – her first, and hotly disputed. After Cloud made the first free throw, she missed the second and then the third.

“We needed that,” said Chiney Ogwumike said during her postgame walk-off interview, fresh off a 10-point, nine-rebound outing – one board shy of recording consecutive double-doubles for the first time as a Spark.

Washington outscored L.A. 31-21 in the fourth quarter, when they hit five of nine 3-point attempts – Williams said his squad didn’t close out on shooters aggressively enough – to make the Sparks sweat.

“I learned,” she said, after taking a moment to consider, “that in circumstances where you’re constantly experiencing change, you still have a group of people who are there and willing to do their best. There’s been a lot of change that we’ve experienced.

“I think on the outside looking in, a lot of people would think, ‘This should happen right away’ but what we’re doing is building a foundation. We were building a foundation when the season started of getting to know each other and we’re still doing that. Understanding that we give each other grace through the change is what’s going to help us remain cohesive.”

Before the game, Williams made it a point to request stickier transition defense after the Dallas Wings ran up 35 fast-break points in their win against L.A. on Sunday.

And the Sparks obliged, limiting Washington to just eight fast-break points – mercifully fewer than the 14.4 per game they’d been allowing.

“Transition is something we’ve been working on the last few days and I thought it helped us a little bit,” Williams said, adding, “and we shot the ball well, that was real key for us tonight, especially against a nice Washington team.”

The Sparks started hitting 3-pointers (because they started taking them) after halftime and used a big third quarter to secure their advantage Tuesday, outscoring Washington 28-20 in the period to take a 12-point lead into the fourth quarter.

The hosts were 1 for 5 from deep through the first 20 minutes. In the second half, they went 5 for 9 from behind the arc. They buried two of them within the first minute of the second half, Kristi Toliver’s 28-footer giving the Sparks their largest lead until that point, 41-33.

Beside Nneka, three other Sparks scored in double figures, including Katie Lou Samuelson (13 points), Jordin Canada (10) and Chiney Ogwumike. Star center Liz Cambage fouled out with 1:14 to play, having accounted for nine points, six rebounds, a steal and a block in 22 minutes.

Elena Delle Donne was out for the Mystics (11-8) on Tuesday, the two-time WNBA MVP getting the day to rest.

The Sparks led 35-31 at halftime, up just four points despite holding the Mystics to 33.3% shooting and 4 for 11 from 3-point range and forcing 13 turnovers while shooting 43.6% themselves.

Nneka Ogwumike had 13 points at the break, but none of her teammates had more than Olivia Nelson-Ododa’s six. Samuelson, Cambage and Chiney Ogwumike all had four at halftime – when Washington had scored only two fast-break points.

Sparks guard Lexie Brown pulled up late in the first half before hobbling off the court and, soon thereafter, into the locker room with a lower leg injury. But she rejoined her teammates warming up and then dancing on the sideline. She returned and finished with two points in 10 minutes.