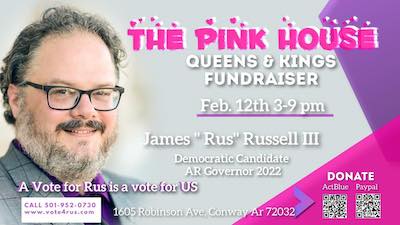 You’d never get a news release like this from a Republican candidate for governor (or probably anything else) in Arkansas. Support for equality is campaign fodder for that side.

On Saturday, Feb 12, 2022 the well-known local LBGTQIA+ landmark “Pink House” will play host to The Campaign to Elect James R Russell, III (commonly referred to by his preferred nickname, “Rus”). Candidate Russell has been an outspoken advocate of equal rights and protections for all Arkansans, having taken part in several Central AR PRIDE events in the past through his business (New Dawn Counseling) as well as attending protests and court hearings in support of Trans rights, the Black Lives Matter
movement, and women’s reproductive rights.

The event will be comprised of two separate sections, the first beginning at 3:00 PM. This will be a family-friendly portion where community outreach and education on equality, diversity, and acceptance are focused on. Then, after a brief break, a second section will begin at 7:00 PM that will feature performances by Drag Queens and Kings who have offered their
talents in support of Mr. Russell.

The Pink House is located at 1605 Robinson Ave in Conway, AR. The event is free to attend though donations will be accepted with proper documentation.
The primaries are slated to be held on May 24, 2022 with the general election on November 8, 2022.