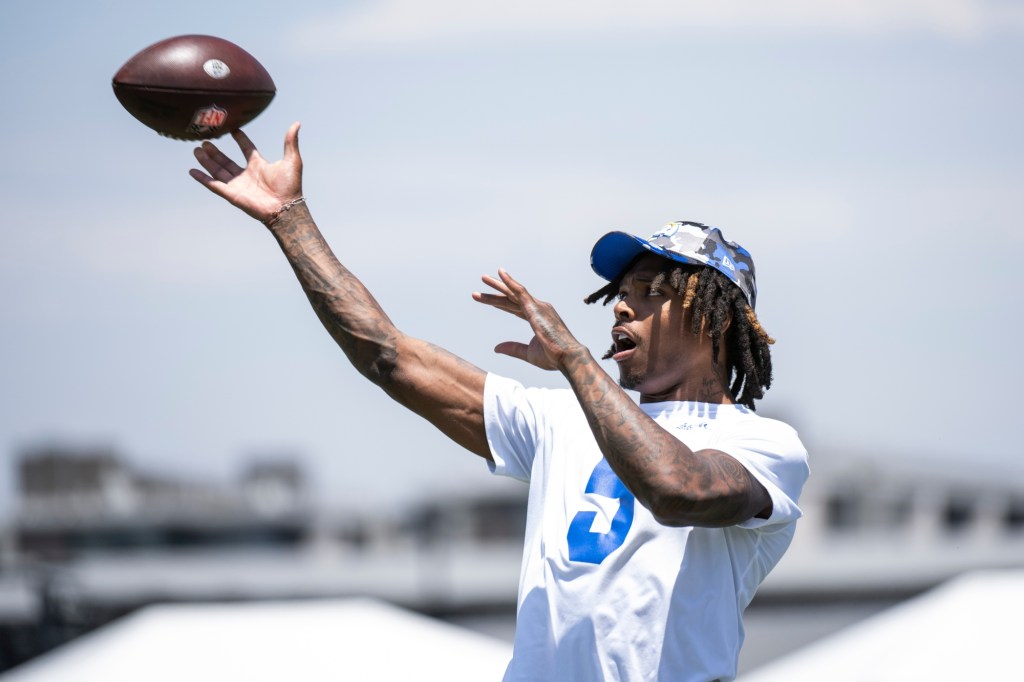 IRVINE — Jalen Ramsey said it’s not painful to watch most of training camp because the pain would have been unbearable if he had decided not to have shoulder surgery last month.

The Rams’ star cornerback is enjoying being an extra defensive backs coach and has no regrets about his “calculated decision” to have a procedure late in the offseason.

“After the surgery happened, I was probably in less pain than the pain I was playing with through the season,” Ramsey said Monday.

Ramsey said he’s on track to be available for the Sept. 8 season opener against the Buffalo Bills and pointed to the team’s decision to not place him on the physically unable to perform list as a good sign.

“There’s no doubt in my mind that I’ll be ready when the time is right,” Ramsey said.

Initially, the Rams planned on placing Ramsey on the PUP list, but Coach Sean McVay decided against it because Ramsey was cleared by doctors to participate in walk-through drills. Ramsey, however, isn’t allowed to participate in individuals and team drills.

Jalen Ramsey: “Cool, I ain’t no puppy anyway, so let’s get it.” 😂🐶 #Rams pic.twitter.com/pj4PbjOHFx

Ramsey said he had no issue with going on the PUP list because he wanted to help the team by creating an extra roster spot for camp. Instead, he’s helping by being a defensive backs coach.

“He’s got a big personality,” Rams safety Nick Scott said. “We all love him to death, but he also has an amazing amount of insight, just with as much time he has spent in the league, and the things he’s done on the field. It’s definitely great to kind of have that current player perspective of your defense and technique.”

Ramsey said he played last season with injuries to both his shoulders and was hoping time off would allow him to fully heal. Having surgery in late June was a surprise to many, but not Ramsey and his trainers.

“It just needed to be cleaned out and made new again,” Ramsey said. “We kind of had a deadline in our mind. We stuck with that deadline to figure out if it’s not getting better by now and we need to fix it, so we’ll be ready when the time is right. It was a calculated decision.”

Ramsey isn’t worried about rushing back to the field. He’s on his own timeline and enjoying being an extra coach to start training camp.

“I hate when I hear on a broadcast and they say, ‘They’re really missing this guy or they’re really missing that guy,’” Ramsey said. “I hate that. I like when it’s seamless. Maybe there’s a top dog, but then everybody else that’s right under is at a steady level, which is an extremely high level of playing the position. That’s the goal for the unit.”

“When I met (Kendrick), he was already out of his shell,” Scott said. “That’s the thing you love about him. Playing the DB position, you gotta have a level of confidence, and he came right on the field and was confident. That’s just his personality.”

Justin Hollins expressed confidence throughout the offseason that he’ll be the second starting edge rusher playing next to Leonard Floyd for the upcoming season.

The amount of reps Hollins has received with the first-team defense after two days of training camp might be a good indicator that he was right. Hollins, a fourth-year player, was also first in line for individual drills Monday.

“I don’t feel like we need to fill anybody’s shoes,” Hollins said earlier in the week about replacing Von Miller, who left the Rams to sign with the Bills in free agency. “It’s just a ‘next man up’ type of thing. Happy for him and what he’s accomplished, what he did for us, and you know the great contract he got with the Buffalo Bills, but we play them Week 1, so we just gotta put that behind us.”

Logan Bruss, the Rams’ third-round pick this year, is competing for the starting right guard position. He gained valuable experience Monday by matching up against star defensive tackle Aaron Donald.

“A.D. is a tough matchup for anybody, but you’re not going to get a tougher look,” McVay said. “I think that’s a good thing. … Logan is a quick study, but there’s no way you can replicate going against Aaron Donald.”

Cooper Kupp checking in for Day 2 of #Rams camp pic.twitter.com/G2vF3YOAxW