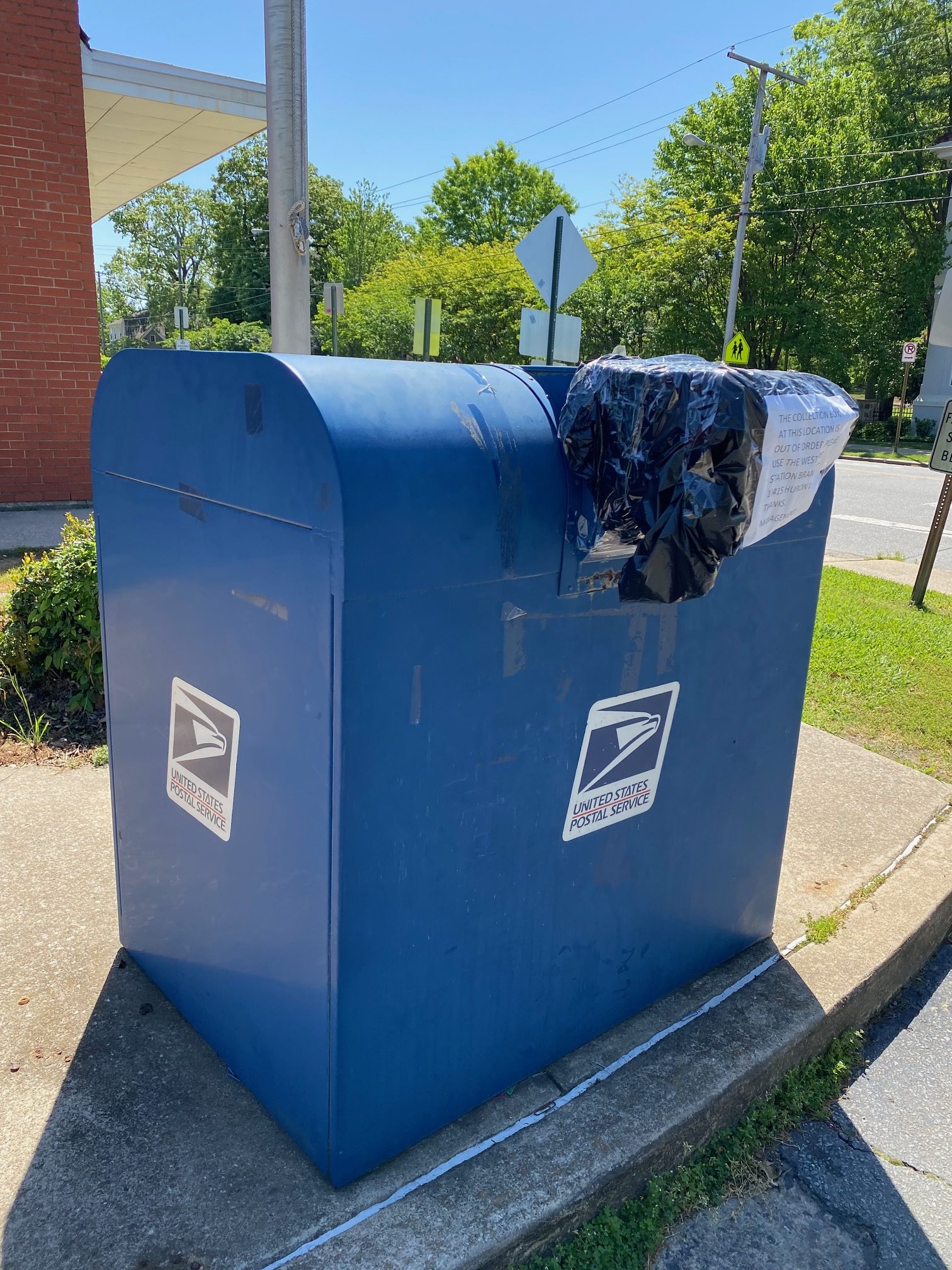 OUT OF SERVICE: Box at Heights station undergoing maintenance, postal inspector says. But he confirms Little Rock has experienced some box thefts “in the area.” (Brian Chilson photo)

I inquired this week about finding drive-by postal drop boxes closed temporarily at a couple of locations, including the station on Kavanaugh Boulevard in the Heights.

It took a couple of days to reach someone with the Postal Service. I eventually got a call from an agent in the Postal Inspection Service, which investigates mail thefts. I asked if the boxes being out of service was related to recent news about an increase in mail thefts from blue boxes nationwide. Thieves are looking for checks, which they fraudulently cash.

Inspector R. Deshields of the Inspection Service said any blue boxes found out of service in Little Rock were sealed for “maintenance issues.” But, he added, “I’m not saying thefts don’t occur. We are aware of thefts in this area and are working diligently to get it rectified and handled.” He declined to discuss details because of the ongoing investigations.

I received a report of the theft of seven checks worth $32,000 that had been deposited in the Heights box. Someone attempted to pass them by ATM or online deposits after scrubbing the checks of legitimate payment information. The issuing bank reportedly didn’t clear them.

Deshields referred to postal operations the question of whether the boxes, when placed back in service, will have additional security. I haven’t heard back. Deshields commented: “The bottom line is, we try to ensure boxes are safe at all times. But the work is not directly related to mail thefts.”

Deshields said people wanting to take extra steps to safeguard mail could drop mail inside stations or during posted collection hours. He encouraged people who think they might have been victims to get in touch with his division at uspis.gov, file a complaint with local law enforcement or call the Inspection Service at 1-877-876-2455.

The Washington Post article on the spike in thefts noted:

During the coronavirus pandemic, there has been a massive spike in checks being stolen from the mail across the United States and used in financial fraud, authorities and researchers say. In March, the U.S. Postal Inspection Service alerted the Justice Department.

The stolen checks trend is linked to a “significant increase” in armed robberies of USPS letter carriers to steal arrow keys, which can open most mailboxes across an entire Zip code, according to a U.S. Postal Inspection Service advisory to the Justice Department. In some cases, one Zip code can encompass an entire city. The primary motive behind these robberies, the March 7 advisory said, is financial theft: “Criminals are stealing mail … to obtain checks, financial instruments, and personal identifying information to commit bank fraud, mail fraud, wire fraud and identity theft.”

Again, the Internet has contributed to a phenomenon. Online platforms are used to sell stolen checks. And forgers’ techniques have improved, a research group found.

The group found that buyers use nail polish remover to erase the intended payee’s name and the amount of the check, replacing the details with their own payee and amount, usually much higher than the original amount. A buyer may also use a fake ID to cash the check at a location such as Walmart.