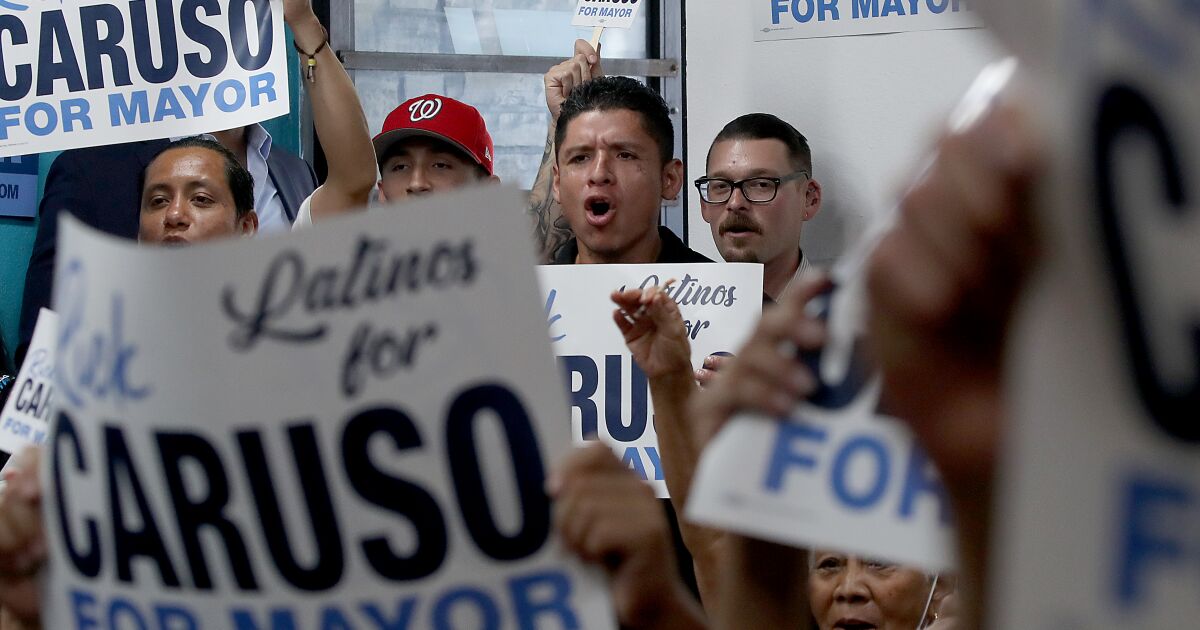 Latino voters in Boyle Heights, probably Los Angeles’ most historic Latino/Chicano neighborhood, have seen more than their usual share of door canvassers and have gotten plenty of phone calls and text messages from a particular mayoral candidate: Rick Caruso.

I know, because I am one of them.

Just last week I got this text (in Spanish): “Pilar, I am Lupe, with the Rick Caruso campaign, he recognizes the importance of the Latino community, and he will focus on good jobs and affordable housing. Can he count on your vote?”

In the last three months, I have had two Latinas come to my door for Caruso, at least two phone calls and plenty of text messages. As far as I can tell, Rep. Karen Bass, the other candidate for mayor, doesn’t seem to be doing much direct contact in this neighborhood, though she did attend the Mexican Independence Day parade on Sunday. Result: There are at least three Caruso signs on front yards on my street.

I am surprised because, as a Latina who always votes — “a likely voter” since becoming a citizen 22 years ago — I have rarely been contacted directly by local campaigns when I lived in other areas of L.A. This time, Caruso seems to want to be my personal friend.

A billionaire mall-builder, Caruso has a lot of money, and he has invested lots of it in his campaign for mayor, hoping to peel away segments of the Latino vote that may include moderate Democrats, independents, Catholics or those wanting more tough love — or a tougher hand — on crime and homelessness.

He has also campaigned hard in the Asian American/Pacific Islander community, because it might be easier to find some undecided and untapped moderates and independents in ethnic communities than in traditionally liberal white communities in L.A.

“Him spending this kind of money is going to help increase turnout,” said Fernando Guerra, a Loyola Marymount University professor of political science and Latino studies.

I know that Bass, through her activism and her organization Community Coalition, is very well known among Latinos in South and Central L.A. and she probably can count on votes from a large chunk of more progressive Latinos who identify with her politics. Interestingly, L.A. City Councilman Kevin De León, who ran for mayor in the primary, has not endorsed a candidate in the runoff yet.

In thinking about the larger stakes of this election, where the national midterms coincide for the first year with the local and state ones, I wonder if the local political class has learned the lesson that’s starting to be obvious at the national level: Latinos have a variety of political viewpoints and we shouldn’t be taken for granted.

Also, we want to hear our issues addressed directly. But is that happening, really?

“We know Latinos are not a monolith but does the California Democratic Party know the difference between Latinos in Sun Valley, Pacoima, Van Nuys, west of the 110 or east of the 110, Northeast and East L.A.?” asks Sonja Diaz, founding director of UCLA’s Latino Policy and Politics Institute.

It’s a good question. These local races are not partisan, but some of them look and feel just like it.

Despite his controversial tenure, which has turned progressives against him, Sheriff Alex Villanueva won Latino precincts at the June primary. He ran as a progressive four years ago, and even though he has shown he isn’t one, he is better known than the challenger, former Long Beach Police Chief Robert Luna.

In a first runoff election for a local office in Los Angeles County with two Latinos running, Luna had a small edge in a recent poll, which found a lot of undecided voters. But how will Latinos decide?

“The sheriff races don’t carry the kind of political visibility that other races carry. So name recognition matters a lot,” said Raphael Sonenshein, executive director of the Pat Brown Institute for Public Affairs at Cal State Los Angeles. Villanueva has advertised in Spanish telling Latinos that Luna is a former Republican. Other Villanueva ads argue that politicians “have abandoned” the people.

The local Democratic Party has coalesced around Luna, but Diaz says she doesn’t see a strategy focused on Latinos, who could easily swing the race.

The same seems to be true for the congressional races in the county. Latino votes are key to one of the hardest-fought toss-up races in California — in District 27 in Antelope Valley/Santa Clarita between Republican Rep. Mike Garcia and State Assemblywoman Christy Smith, a Democrat. Democrats could have identified a Latino to run against Garcia, a Trump supporter, but they did not. Smith has lost twice to Garcia before.

The race between Republican Rep. David Valadao and Democrat Rudy Salas in the Central Valley is another toss-up, where the Latino vote is critical in the redrawn and more Democrat-friendly District 22.

More than 25 years ago, Latinos helped change the politics of California, after anti-immigrant Proposition 187 encouraged more than a million of us to become citizens and to vote.

Latino voters, particularly women, may turn out in big numbers to support Democrats this November. For these voters, the right to abortion is now a critically important issue, along with inflation, crime, gun violence, healthcare and jobs.

But the closer you get to home, the more retail politics matter and I am not so sure that Latinos, who make up nearly half of the population in L.A. County, are getting treated, with a few exceptions, like the kingmakers they are in our own backyard.

Pilar Marrero is a journalist who has covered the Latino community in Los Angeles and California for more than three decades.