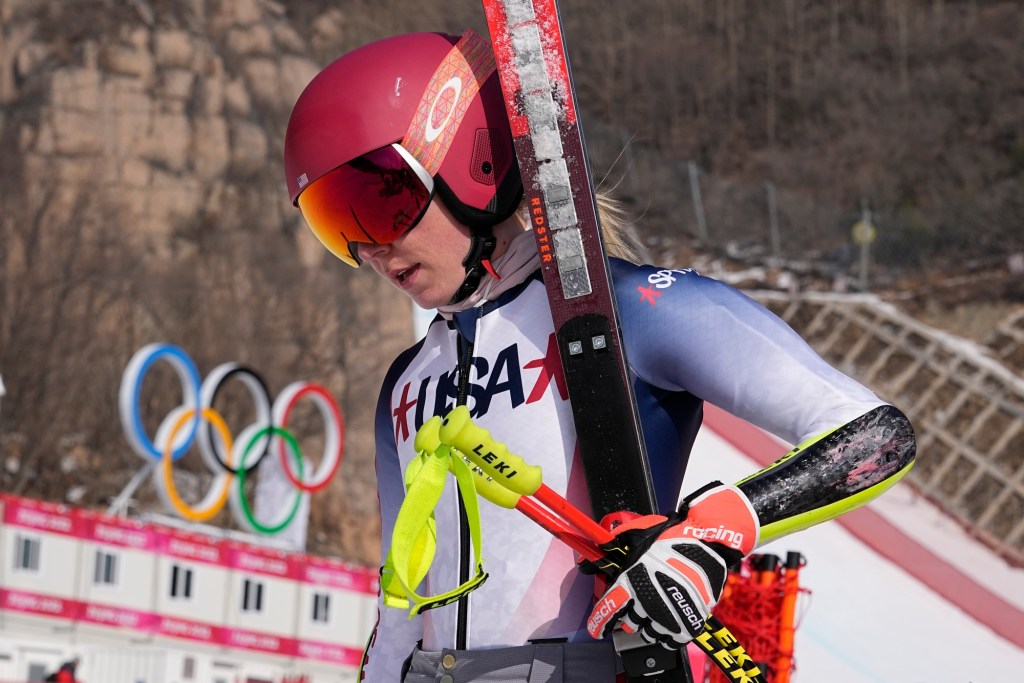 BEIJING — The on-the-slopes portion of what Mikaela Shiffrin hopes will be a “reset” at the Beijing Olympics – moving on from early mistakes that eliminated her from two races – began under a cloudless sky with a pair of trips about a half-hour apart down the competition hill during an official training session Thursday for the upcoming super-G.

Wearing a maroon racing helmet, bright red reflective goggles and a white racing suit with “USA” on the front in blue capital letters, the two-time Olympic gold medalist eased across the finish line each time, upright instead of in a speed-preserving tuck. After the first, she paused briefly to chat with two other racers. After the second, she swiftly made her way past a gathering of about a dozen folks and was on her way.

All of that was clear to anyone present. Less certain right there and then: How Shiffrin is faring with her off-the-slopes attempt to get over those sudden and surprising exits in her best disciplines.

What become known via the U.S. ski team a few hours later, though, was that Shiffrin will, indeed, take part in the super-G on Friday as the women move from the technical to the speed events. That will be her third start of what still could end up being a six-race trip to China.

“It’s hard to accept what happened, but she has to work through it. And one of the better ways to do that is to keep looking forward. She has multiple events here, which is great for her,” U.S. head women’s Alpine coach Paul Kristofic said. “You have to look at what’s in front of you and try to put what’s behind you to rest, as difficult as that is.”

Shiffrin, a 26-year-old from Colorado, never has entered a super-G at an Olympics, but she did win it at the 2019 world championships.

“Being outside and switching events and doing something different – it’s a different impulse, for sure, in speed, and it’s a good feeling to be out here and pushing and skiing well,” Kristofic said. “That’s part of the process to get through it.”

Shiffrin’s boyfriend, Norwegian skier Aleksander Aamodt Kilde, described her as being “in a good state; she’s all right.”

“She’s a hero and she can handle this. She handles pressure like no one else, and this is something she will come out of,” said Kilde, who won a silver Thursday in Alpine combined. “But it’s been a couple of tough days.”

A U.S. ski team spokeswoman said Thursday that Shiffrin and her mother, Eileen, who also serves as a coach, would not “be doing any media for the foreseeable future.”

“But I also don’t know how to do better because,” she continued, and then paused, before adding, “because I just don’t.”

So much success on skis came so quickly, and seemingly so easily, for Shiffrin.

On a World Cup podium at age 16. A world champion at 17. An Olympic gold medalist at 18. And the accolades kept on coming for the American, who now is 26: A second Winter Games gold, along with a silver. Six world championships in all. Three overall World Cup titles. A total of 47 World Cup slalom wins, more than any other athlete in any event, ever.

That’s why her start in China is so difficult for everyone to comprehend, including her.

“It is strange to see. But it also makes her human. It makes her more like all of us – because, sometimes, you ask yourself whether she actually is. She’s so precise, so strong mentally, that you ask yourself whether what she does is even possible,” said Federica Brignone of Italy, who won a silver in the giant slalom this week and a bronze behind Shiffrin in that race four years ago. “She’s an athlete who has won so much, but maybe she was too stressed out.”

In the lead-up to the Beijing Olympics, Shiffrin talked about the pressure and expectations she was all-too-aware of – from within, from fans, from coaches, friends and family.

Kristofic raised that topic when asked to explain what might have gone wrong with Shiffrin’s skiing so far.

“Mikaela has her technical cues, and obviously they work. In a big event like this, the pressure is something that most of us aren’t able to comprehend, especially when you’re a medal favorite, or a gold medal favorite, for multiple events. That’s the piece that’s hard for anyone else, other than the actual person in it, to really wrap your head around,” he said. “That kind of pressure is not the easiest thing to manage and it can manifest in physical ways.”