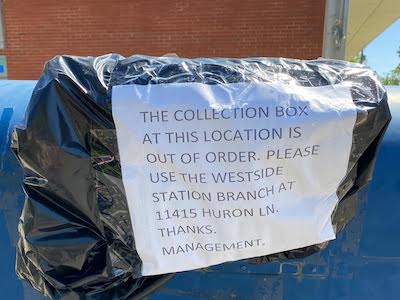 I wrote yesterday about the coincidence of a rise in mail theft and the closure of some mail drop boxes, including at the Postal Service’s Heights station on Kavanaugh Boulevard.

A postal inspector acknowledged some thefts in the area, but said box closures were related to maintenance, not thefts. The item brought a couple of responses:

One came from a friend who put a batch of checks in the Heights box in mid-April. A couple reached their destination. But …

four so far have been passed through my banks in amounts totaling over $14K to payees unknown to me. The banks did negotiate the checks, but they made me whole when I reported the fraud. In one case, the same check was scrubbed and submitted for deposit twice (same check number). Three of the four had an identical signature that was not mine. The checks were scrubbed and rewritten. In no case was the amount on the checks that were fraudulently redirected related to the amounts of my tax checks.

He said local police and the Postal Inspection Service are working on the case.

I also heard from Frank Albergo, national president of the Postal Police Officers Association, who repeated to me complaints he’s made elsewhere. The officers are separate from inspectors, who investigate thefts. He wrote, in part:

PPOs, for years, were conducting mail theft prevention patrols by using data to target specific zip codes where mail theft was most prevalent. Unsurprisingly, it was working.

Essentially, the Postal Service defunded its own uniformed police force in the midst of a mail theft epidemic.

In response, the PPOA filed a lawsuit for injunctive relief. Although our complaint was dismissed, the Court ruled:

“In short, §3061(c) is ambiguous with respect to the issues at the heart of this case.   Faced with these ambiguities, USPS did not act unreasonably by interpreting the statute to limit PPOs’ law-enforcement jurisdiction to the protection of postal real property or, alternatively, to leave the question of PPOs’ off-premises policing authority to USPS’s discretion.  As already discussed, these conclusions  follow from  what is probably the most natural reading of the statute, if not the sole permissible reading.”

One would have logically thought that the Postal Service would have exercised its discretion to put PPOs back out on the street again—where they are needed most—to protect postal employees and the mail. The Postal Service, however, inexplicably refuses to do so.  Instead, the Postal Service insists on confining its highly-trained uniformed police force to USPS real property while simultaneously, mail theft and assaults on postal workers are increasing at an exponential rate.

He repeats what was reported in an article I linked yesterday about thefts of mailbox keys from postal carriers, the sale of stolen checks on the dark web and mounting evidence of a rise in thefts. He also said arrests have been scant and the USPS has resisted calls for putting the officers back on the streets.

I also heard anecdotally from another reader about thefts of checks placed in residence mailboxes for pickup.

Electronic payment seems an appealing alternative, but of course, hackers know how to penetrate personal digital accounts, too.