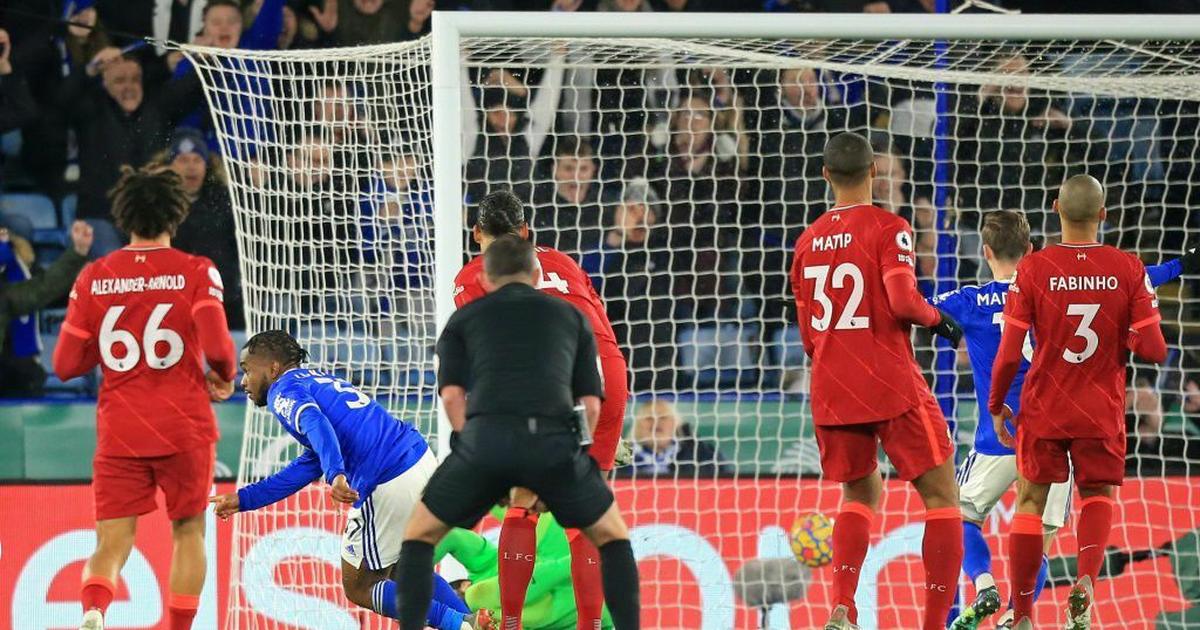 Liverpool trail leaders Manchester City by six points with the champions set to play at lowly Brentford on Wednesday.


Jurgen Klopp’s side saw their 10-match unbeaten run in all competitions ended by Lookman’s second half strike at the King Power Stadium.


Beaten for the first time since their 3-2 loss at West Ham in November, Liverpool paid the price for missed chances.


It was the first time second placed Liverpool had failed to score in the league since March.


Liverpool’s flop against Covid and injury ravaged Leicester, who were hammered 6-3 by City on Sunday, puts extra pressure on them to take maximum points at title rivals Chelsea in their first game of 2022 on Sunday.


Klopp this week admitted Liverpool will need to be “perfect” if they are to pip City to the title, but this misfiring display was well short of that high bar.


Both Klopp and Leicester boss Brendan Rodgers had criticised the “ridiculous” demands placed on their players by the packed festive fixture list.


But Liverpool had more rest than Leicester over Christmas after a Leeds Covid outbreak forced the postponement of their game on Sunday.


Back in action only 48 hours after their thrashing at City, Leicester were unable to field a recognised centre-back for a rematch of the League Cup quarter-final won by Liverpool on penalties last week.


Jordan Henderson nearly fired the visitors into the lead when he volleyed just over from the edge of the area.


Salah had a golden opportunity to open the scoring in the 16th minute after his slalom through the Leicester defence was halted by Wilfred Ndidi’s trip.


But Salah failed to score a Liverpool penalty for only the third time as Schmeichel saved his unconvincing effort before the Egyptian headed the rebound against the bar.


It was Liverpool’s first Premier League penalty miss in 22 attempts since Salah was denied from the spot against Huddersfield in 2017.


Alex Oxlade-Chamberlain’s inswinging cross almost caught out Schmeichel, but the Leicester keeper scrambled to palm the ball away before it could creep in.


Schmeichel denied Salah again with a superb tip-over from the forward’s close-range blast.


Henderson wasn’t far away with a volley that whistled over before Diogo Jota dragged a decent chance wide.


But Sadio Mane was guilty of a shocking miss when he sprinted through the heart of the Leicester defence, only to blaze over with just Schmeichel to beat.


Klopp held his head in frustration and the German had even more reason to rue Liverpool’s profligacy in the 59th minute.


Three minutes after coming off the bench, former Everton forward Lookman took Kiernan Dewsbury-Hall’s pass, danced past Joel Matip and forced Van Dijk to back off as he planted a fine finish past Alisson Becker from 10 yards.


Elsewhere on Tuesday, Tottenham were held to a 1-1 draw at 10-man Southampton.


Southampton took a deserved lead in the 25th minute with a stunning strike from James Ward-Prowse.


The game was turned on its head when Mohammed Salisu brought down Son Heung-min in the penalty area shortly before half-time.


Salisu was sent off for a second yellow card and Harry Kane made no mistake from the spot.


In the second half, Kane saw a goal controversially disallowed by VAR for offside.


“Yeah, I think Harry scored twice, one a penalty and then the second goal. I think that I don’t want to comment on the referee decision or the VAR decision,” Conte said.