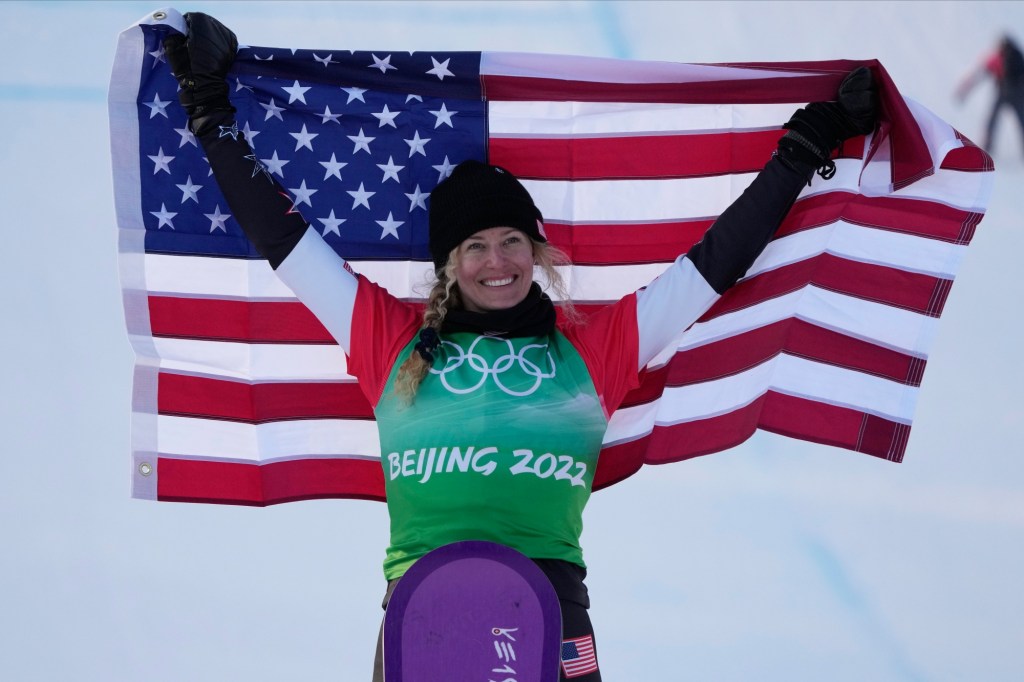 ZHANGJIAKOU, China — Lindsey Jacobellis captured the United States’ first gold medal of the Beijing Olympics on Wednesday (late Tuesday night PT), riding hard to the line in her snowboardcross final a full 16 years after a mistake cost her the title.

The 36-year-old racer was competing in her fifth Olympics and captured the first U.S. win of what has been an otherwise dismal Games for the red, white and blue.

The victory came hours after the top American racer, skier Mikaela Shiffrin, skidded out and failed to finish the first run of the slalom, making her 0 for 2 in Beijing.

With the win, Jacobellis rewrites a few special entries in the Winter Olympics history books. She became the oldest U.S woman to win a gold; also, the 16 years marked the longest gap between medals for any U.S. woman.

Up until Wednesday, Jacobellis was best known for taking a massive lead into the final jump at the 2006 Turin Games but pulling on her board in a showboat move as she rode over the crest, then falling and settling for silver.

This time, she rode hard all the way to the line, beating Chloe Trespeuch of France. She covered her heart with her hands as she slowed. At the post-race ceremony, she received one of the treasured Bing Dwen Dwen stuffed animals, lifted it over her head and just stood there and beamed. Meryeta O’Dine of Canada won the bronze.

“They can keep talking about it all they want,” Jacobellis said. “Because it really shaped me into the individual that I am. It kept me hungry and really kept me fighting in this sport.”

That the first U.S. gold would come from Jacobellis, and not Shriffin, or someone else in the action park – say slopestylers Jamie Anderson or Red Gerard – was surprising. That Jacobellis would put herself in the win column after all these years was not a shock at all.

Long after the embarrassment and dismay of her “Lindsey Leap” in 2006, Jacobellis kept on riding, and winning. Since 2007, she has amassed 45 World Cup podiums; 23 of those have been golds, and she had two third-place finishes coming into the Games.

“This feels incredible because the level that all the women are riding at today is so much higher than it was 16 years ago,” Jacobellis said.

Still, that silver-medal Olympic performance has followed her, and she has largely chosen to stay out of the spotlight. At a media opportunity with all the snowboardcross riders last week, Jacobellis stayed back to concentrate on racing, her coach said.

And while Shaun White and Chloe Kim can’t take two steps around this snowboard park without getting noticed, Jacobellis walked alone with a member of the U.S. staff a few hours before her final. Nobody even noticed.

The trip back down the hill might be more crowded.

“It doesn’t define you,” she said when asked what message she’d send to younger racers about mistakes of the past. “Especially if you’ve made it to this stage, you’re a winner. And look at what you’ve learned from the experience, and take that with you later in life.”