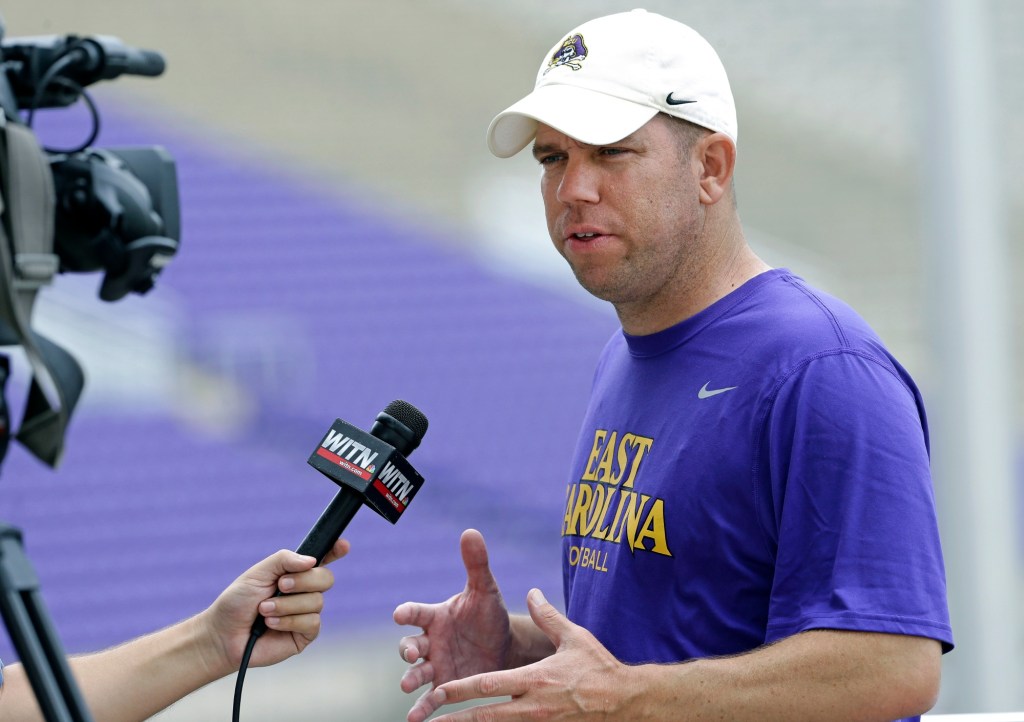 A day after the death of USC inside receivers coach Dave Nichol, Lincoln Riley shared the stories and thoughts, via Zoom with reporters, that had likely been sprinting through his head since learning that Nichol, 45, had died from cancer Friday.

As Riley detailed a relationship that had lasted over 20 years, there was one inescapable conclusion for him.

“I look back on it now and think, ‘Man, like had Dave not taken a vested interest in some no-name walk-on coming in there, I probably wouldn’t be here right now,’ ” Riley said. “So myself, my family, we really owe everything to the guy.”

Riley may have hired Nichol to join him at USC, 10 years after he hired Nichol while offensive coordinator at East Carolina, but that was not their original dynamic. Riley credited Nichol for giving him his opportunity to first walk on as a quarterback at Texas Tech in 2002 when Nichol was a graduate assistant.

Nichol worked with the Red Raiders’ offense. Riley constantly peppered Nichol with questions about Mike Leach’s scheme, trying to learn as much as he could from a staff member who was willing to give the time to the walk-on QB.

“I probably bugged him to death those early years,” Riley said. “Dave was one of those people, he didn’t care where you’re from, he didn’t care your rank in the organization. He treated the head coach the same way he treated some first-day walk-on. That was just him.”

That continued for the next three years when Riley was a student coach at Tech. At first, Riley felt like he was lost, uncertain how to perform his first job in the profession.

“He was kind of the guy that guided me, kinda taught me how to become a coach,” Riley said. “Without him, I really didn’t have any other ins into this business and this business is hard to get into. … [T]here’s a strong possibility I wouldn’t be in college coaching without him in a lot of ways.”

There’s no linear career path in coaching. You take whatever opportunity is put in front of you and hope you can build that into the next opportunity, and the next.

For Nichol, that meant eight years of paying his dues before he was promoted to be a full-time, Division-I assistant by Mike Stoops at Arizona in 2008. He served as a graduate assistant at three schools, even serving as an assistant at Cisco Junior College in Texas for a season.

“I think he made like $10,000 a year,” Riley said. “I remember him telling me, they painted the lines on the field, they would paint the locker room, they did repairs, they were academic counselors, they did everything.”

So when Riley was hired at USC, Nichol was one of the first people he thought of. And even as Nichol battled his illness these past several months, it wasn’t something he wanted to talk about in the evenings when Riley called him after work.

“All he wanted to talk about was how are the guys doing, how is install going, how are walk throughs? He was Zooming in to everything we did,” Riley said. “That just shows you kind of who he was, man. He loved ball.”

It’s been a difficult two days around USC. Along with Riley, several assistants and staffers worked with Nichol throughout their careers. They plan to honor their late friend in some way this season.

But the coaches found some solace Saturday by going out to the practice field and working with the Trojans.

“That’s where Dave loved to be, he loved the field as much as anybody,” Riley said. “You take some peace in that that you’re out there doing what he loved to do.”