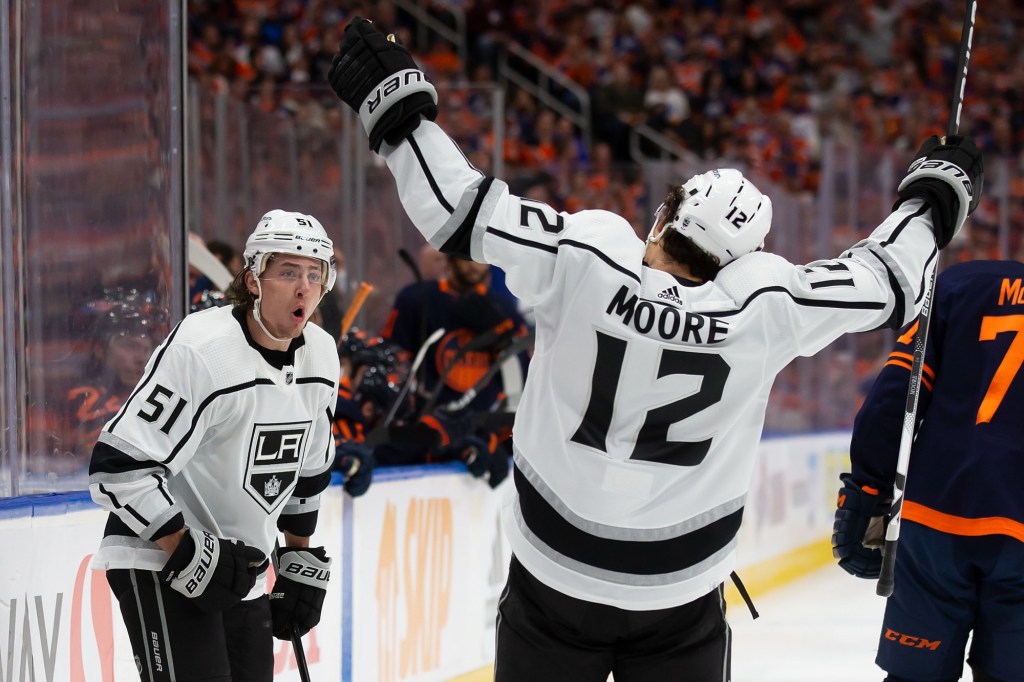 The streamers and confetti will be locked and loaded in the rafters Thursday night when the Kings host the Edmonton Oilers with an opportunity to win their first-round series and advance in the playoffs for the first time since they last hoisted Lord Stanley’s Cup.

That was in 2014, which was also the last instance in which they held a 3-2 series lead, as they do over Edmonton. The Kings assumed control of the ’14 conference finals against Chicago with a 3-1 lead through four games, only to falter in Games 5 and 6. They would exalt after a record third consecutive Game 7 victory en route to a second championship in three campaigns.

In franchise history, the Kings have held a 3-2 series lead 10 times, and advanced in nine of those opportunities. Their only loss might be attributed to a bit of beginner’s misfortune: It came in their inaugural campaign of 1967-68 against the Minnesota North Stars.

Entering this season, the Kings were widely viewed as being closer to that expansion group than the roster that won two championships. But these Kings have proven repeatedly that outside perception held little weight in their dressing room. They now sit one win away from a matchup with either the Dallas Stars or the Calgary Flames and the coach of those title-winning teams, Darryl Sutter.

“We don’t want to be just that team that goes to the playoffs, loses in four and goes on vacation,” Kings center Phillip Danault said. “We want to achieve some good things, we want to be proud of ourselves. We believe in ourselves as well, like, we can do some damage.”

Danault and Coach Todd McLellan emphasized that although they have put themselves in the driver’s seat with two consecutive wins – a 4-0 shutout in Game 4 and an exhilarating overtime victory in Game 5 – they will not need more of the same but rather something even grander in Game 6.

“We need to get better, not keep doing what we’re doing,” McLellan said. “These last two games that we’ve played won’t be good enough in Game 6, so we’ll have to find a way to be better.”

Game 6 will represent an opportunity to slam the door on the series, something the Kings have been effective at doing in individual games under McLellan, even in leaner years in which they missed the playoffs. In three seasons behind the bench, McLellan has stewarded the Kings to a 61-3-9 record when leading after two periods.

Their resolve in that situation was tested mightily in Game 5, when Edmonton scored three third-period goals on special teams –– two power-play markers and a shorthanded tally –– to create overtime tension.

Edmonton got three points apiece from its most formidable weapons, Connor McDavid and Leon Draisaitl, but the Kings outdueled them thanks in large part to a commensurate performance from winger Adrian Kempe. He capped his own three-point night with a game-winner 1:12 into the extra frame.

“We’ve shown all year that we have a great identity as a team,” Kempe said. “It doesn’t matter if we’re down three goals or if we’re up and teams come back on us, we always have that mindset that you’ve got to reset.”

Edmonton may now be the organization scrambling for the reset button as the Oilers’ shoulders feel the weight of recent failures – they were swept by underdog Winnipeg last season and bounced from the play-in tournament by 12th-seeded Chicago a year earlier – and prior triumphs alike.

The Oilers have clung to the coattails of the “City of Champions” era during which they won five titles in seven years with the likes of Wayne Gretzky, Mark Messier, Jari Kurri, Paul Coffey and Grant Fuhr. Over the past 30 years, the Oilers have advanced past the second round just once, a Cinderella run to the Stanley Cup Final that came up one game short only to be followed by a decade of postseason absences.

The 2022 Oilers will be playing for their season Thursday without a key player. Top defenseman Darnell Nurse was banned for one game by the NHL for head-butting Danault in Game 5. Winger Zack Kassian was also fined $5,000, but not suspended, by the league for his cross-check that sent defenseman Sean Durzi to the ice in pain.