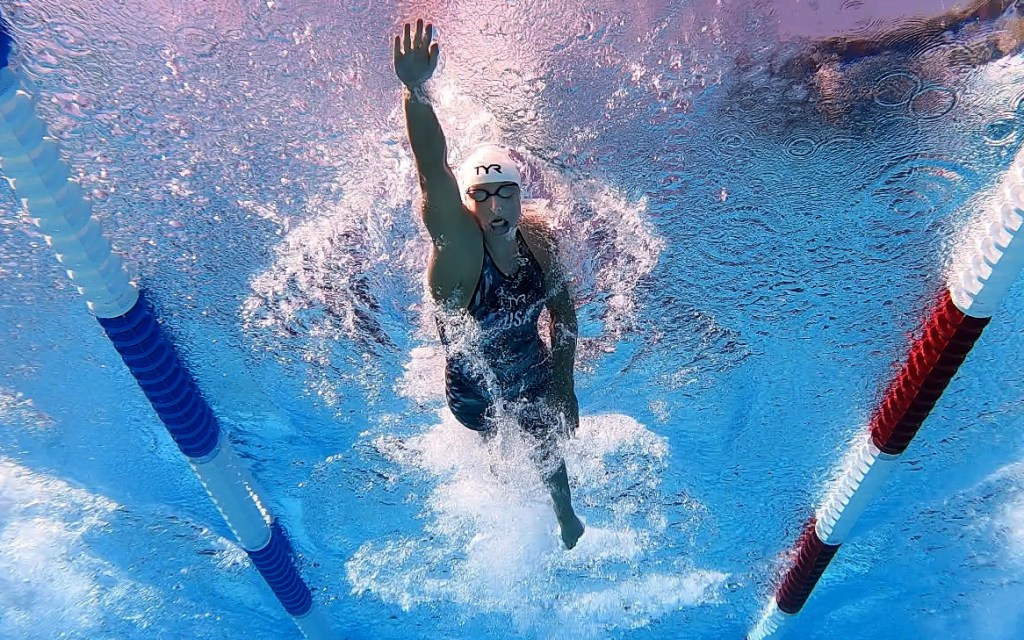 IRVINE — If there is a doldrums in the USA Swimming schedule that zaps enthusiasm and keeps some top racers out of the pool, it’s the middle of an Olympic quadrennial, the midway point of the journey to the next Games.

But in every challenge, there’s also an opportunity, for champions and up-and-comers alike.

Katie Ledecky and Erin Gemmell embraced their chance to race on Wednesday night at the Phillips 66 nationals, unfolding at the Woollett Aquatics Center two years ahead of the Paris Olympics.

Ledecky, the seven-time Olympic gold medalist now training in Florida, shook off some sluggishness to rally past rising 17-year-old Gemmell in the final of the women’s 200-meter freestyle for her second U.S. title in as many nights.

Ledecky, 25, trailed Gemmell by two-tenths of a second after the first lap but soon took the lead en route to a winning touch of 1 minute, 54.50 seconds, her fastest time this year and one that would have claimed gold at the recent FINA World Championships in Hungary.

But the world’s most decorated female swimmer couldn’t dominate Gemmell, whose father Bruce coached Ledecky during her rise at Nation’s Capital Swim Club in Virginia. The younger Gemmell shaved about a second off her lifetime-best with a second-place touch of 1:56.14.

Ledecky quickly congratulated Gemmell and the pair shared a high-five before departing the pool.

“It’s awesome,” Ledecky told the crowd of Gemmell’s time, which ranks 10th in the world this year and second to Ledecky among U.S. women. “She was right there the whole time. To see her have a massive drop like that is really excited for Team USA moving forward.”

Ledecky said she “didn’t feel so sharp” during the morning prelims but left “pleased” after the final. Her finals time ranks second in the world this year to Olympic champion Ariarne Titmus, her Australian rival who clocked a 1:53.31 in May.

A few other up-and-comers also showed promise Wednesday. Penn sophomore Matt Fallon dropped a second from his personal-best in the 200 breaststroke with a sizzling back-half to win in 2:07.91, the fastest time by an American man this year and the third fastest time in the world this year overall.

Indiana Swim Club’s Mackenzie Looze, daughter of Indiana coach Ray Looze, also emerged from her club’s talented breaststroke group by winning the 200 in 2:25.35, more than a two-second drop from her lifetime-best. The 22-year-old trains with Olympians Lilly King and Annie Lazor, who are among the U.S. stars absent this week.

The nationals continue Thursday with the 400 individual medley and 100 butterfly.

All-County swimmer David Schmitt of San Juan Hills High and Evolution Racing Club was honored Wednesday as the 18-and-under champion from the men’s 200 butterfly on Tuesday. The CIF-SS Division 1 and state champion placed 12th with a time of 1:59.02.