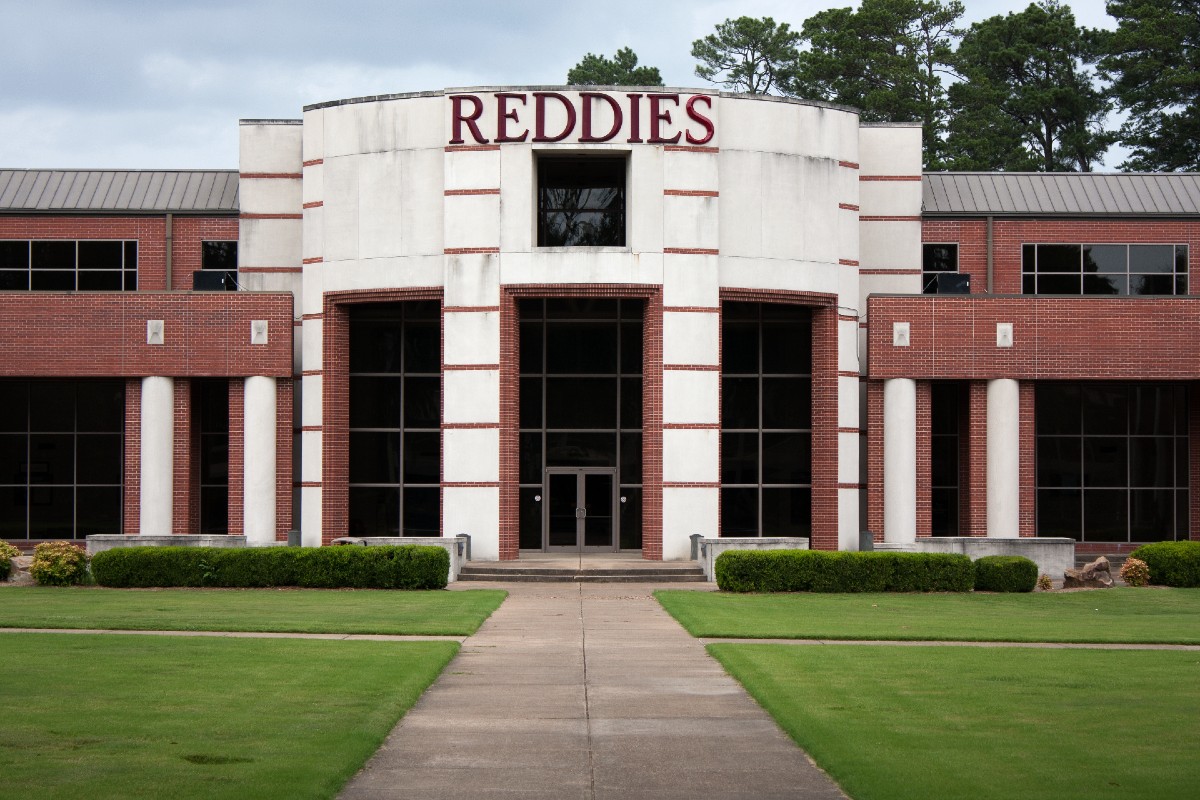 Dozens of Henderson State University faculty members learned on Thursday they were losing their jobs, some immediately and others after one year, as they graded final exams and prepared for the small Arkadelphia college’s spring commencement.

During a meeting held in Little Rock and streamed online, the Arkansas State University System’s board of trustees voted unanimously to cut 88 instructional positions, or 37% of the 237 total positions at Henderson. Twenty-one of those jobs are currently unfilled.

The ASU System also will gradually eliminate 25 degree programs at Henderson, including those in English, math, history, Spanish, geography, social science, early childhood development and theater arts. Some other programs may be added for deletion later.

Henderson became part of the ASU System in 2021, after years of financial turmoil and deficit spending. By 2019, the school ended the fiscal year on the brink of insolvency. It stayed afloat only with the help of an emergency $6 million loan from the state. Today, the financial picture has improved somewhat, but Henderson remains saddled with tens of millions of dollars in debt and has struggled to attract and retain students.

Of the 66 soon-to-be-eliminated positions that are currently filled, 44 are held by tenured faculty.Those professors may remain employed through the 2022-23 academic year.

The changes will result in annual salary savings of $2.55 million in fiscal 2023 and an additional $2.79 million in fiscal 2024, the ASU System said in a news release. Elimination or reduction in non-instructional unit salaries and restructuring of administration positions have already resulted in $1.8 million of savings, it said.

Current students and freshmen entering this fall will still be able to complete degree programs that are due to be phased out, school administrators have said.

Chancellor Chuck Ambrose, who joined Henderson in November, said the school will continue to teach core subjects even though degree programs in some of those areas are being eliminated.

“We will still teach math,” he told the ASU System board, along with English, biology, art and other subjects.

As for how Henderson will teach English, for example, if it has no English instructors on staff year after next, Ambrose said the university would work with Ouachita Baptist University (which is also in Arkadelphia), community colleges in the region, and the ASU System to provide instruction — sometimes online — for students working toward these “teach-out” degrees, Ambrose said.

“As we have said repeatedly, Henderson will continue to offer [general education] courses such as English, math and history. Multiple resources can be used for this instruction at a lower cost than using tenured faculty” Jeff Hankins, a spokesman for the ASU System, said in an email. Graduates of programs such as education, he said, will still be qualified.

Henderson also will be free to hire part-time, or adjunct, teachers for such subjects in the future, Hankins said.

Speaking to the board, Ambrose said in prepared remarks that faculty were warned on Dec. 9 that budget cuts would be coming. “We notified the campus community that a modified cash budget was required to restore the financial integrity of the university. Without significant reductions in spending, we could not pay our debt service or our vendors and have enough cash remaining to cover our payroll in June,” he said.

“The solvency of Henderson is at risk,” Ambrose said.

That said, he added, “We are not closing. We are not becoming a future trade school.”

Trustee Jerry Morgan asked what would have happened to Henderson if the ASU System had not taken over the small college.

“I truly believe that the university … would have more than likely closed by early 2020,” said ASU System President Chuck Welch, a former president of Henderson.

Henderson officially became part of the ASU System in February 2021. In July 2019, Henderson’s president, Glen Jones Jr., resigned under pressure shortly after securing a $6 million interest-free state loan to keep Henderson afloat. Under Jones’ tenure, the school had engaged in years of deficit spending and depleted its reserve funds.

Jones has since become senior adviser to the president at Georgetown University and is chairman of the board of directors of Southern Bancorp Inc.

Faculty members said they were notified by phone of the recommended cuts Monday before the board formally approved them. Some faculty questioned whether the board was merely rubber stamping Ambrose’s plan, especially since the trustees did not consider budget recommendations made by a faculty committee, which suggested less severe cuts.

Hankins said the calls were a “courtesy” to let faculty members know of the recommendations.

“We otherwise would have blindsided the potentially impacted employees after any board action. And, we didn’t want anyone to learn second or third-hand.”

The academic cuts are the culmination of three years of efforts to get Henderson out of its financial nightmare. In addition to the state loan, which must be paid back by 2028, the school has received millions of dollars in federal pandemic relief funds. Henderson has reduced employees through attrition, cut staff positions, cut administrative pay, and required faculty and staff to take unpaid furloughs.

Those efforts have helped, but Henderson has still struggled — its declining enrollment and low student retention rates made worse by the COVID-19 pandemic and a shrinking population in south Arkansas.

Before the Thursday board meeting, Henderson’s faculty senate approved a resolution expressing no confidence in Ambrose’s administration and requested his “immediate dismissal.”

It was the third no-confidence vote at Henderson in recent years. The first was in May 2018, when Jones was still president. Faculty also voted no confidence in three other senior administrators, including Brett Powell, Henderson’s vice president for finance and administration. At the time, Henderson was overseen by its own board of trustees, which did not heed the faculty’s warning.

The second no-confidence vote came in July 2019, by which time the extent of Henderson’s money problems was finally becoming public. Powell had already left by that point to take a job at Baylor University. When the school became a part of the ASU System in 2021, Henderson’s board was dissolved.

Ambrose did not respond to a request for comment on the recent vote.

There was clearly no mood for firing Ambrose during the ASU System board meeting. The no-confidence resolution itself was barely mentioned; trustee Steve Eddington downplayed the vote, saying it was approved by only a few members of a much larger faculty.

Faculty members and a couple other people were allowed to address the board by video, though each speaker was cut off at the three-minute mark.

Megan Hickerson, a history professor and member of the faculty senate, said in an interview that she proposed the no-confidence resolution, which passed 13-6 with five abstentions.

“This is what representative bodies do,” she said.

“It seems clear to all of us that [Ambrose] knew what he was going to do” before the faculty committee offered its recommendations for budget cuts, Hickerson said. “We all knew for years … that there was a problem. But nobody would let us help fix it. It’s like the Ph.D.’s on campus are [treated like] the least intelligent ones.”

Biology professor James Engman, the faculty senate president, said after the board meeting that he resigned from the panel at the end of the meeting because he didn’t want to be part of a process that pretends the university has “shared governance.” As president, he did not vote on the no-confidence resolution, he said.

“At this point, I feel there is not a shred of shared governance” on the HSU campus, Engman said. “These [academic and program cuts] are being made without any input from faculty.”

“I believe the process … has been as transparent as possible,” Gardner said during the board meeting.

Katherine Strause, the chair of Henderson’s art department and a tenured professor in art and painting, said, “Dr. Ambrose is doing what he thinks is right. I get it, but I do not think it is good for this state. … Arkadelphia will be just decimated by this.”

In an interview, Strause, who also addressed the board at the Thursday meeting, said, “We as faculty certainly agree that changes have to be made, and we tried to do that … with Glen Jones and Brett Powell. We tried to take the board by their lapels and shake them and say, ‘They are ruining this school.’ We watched them hire consultants, come up with outrageous plans.”

Hankins said Henderson has not cut and is not planning to cut any sports. He said the school offers 12 sports and NCAA Division II participation requires 10 sports. “Only 5 of 12 sports are men’s sports. No women’s sports can be cut due to Title IX requirements,” he said in an email.

“Athletics is a substantial enrollment and revenue driver for Henderson with around 500 student-athletes,” Hankins added. “Division II is a partial scholarship model. For example, 150 football players split only 36 scholarships, and 50 baseball players share just 8 scholarships. So, we receive tuition and housing revenue, Pell grant revenue, lottery scholarship revenue and many other benefits.”

Asked whether any athletic jobs had been eliminated either through attrition or other cuts, Hankins said, “Various cost savings have been implemented since 2019 in athletics and other non-academic areas.”

Steve Listopad, a Henderson lecturer in journalism and media and adviser to the student newspaper and yearbook for the past five years, said he thought the ASU System board should have delayed a decision.

“There should have been more time for discussion and input and more perspective … particularly discussing other options,” said Listopad, who is leaving Henderson and taking a job with the Arkansas Press Association.

“They could have at least brought up the faculty’s [budget] proposal … and discussed it, but they didn’t. That just solidifies my belief that this was all predetermined,” Listopad said after the meeting.

“I don’t necessarily think the plan is a terrible idea,” he added. “I just don’t think it was handled in the best way. I think there could have been reasonable modifications to the plan … by spreading out some of the reductions instead of entire program cuts, but that’s harder work. It’s not as quick and easy to reduce as it is to cut.”

This story is courtesy of the Arkansas Nonprofit News Network, an independent, nonpartisan news project dedicated to producing journalism that matters to Arkansans.