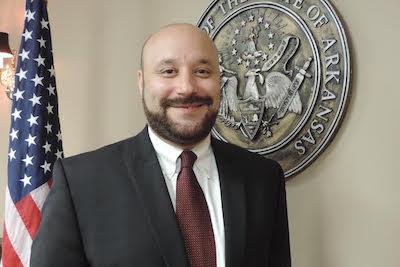 After a whirlwind week of late nights, snow delays and a marathon Saturday session, both sides finished arguments in a case over whether Arkansas’s new state House maps violate the 1965 Voting Rights Act by weakening Black Arkansans’ political power.

And while skeptics predict we’ll be stuck with a discriminatory map, it’s not a done deal.

“I have not made a decision yet,” United States District Court Judge Lee Rudofsky said as he was winding up the hearing shortly after 5 p.m. This was not a case where he came in with an idea of the direction he would go and drafted a decision in advance, he said. He pledged to issue his ruling sometime next week. “We’re committed to working 24-7 until we get it out.”

Time is of the essence here, because so much preparation for 2022 elections hinge on district lines. Candidates are supposed to begin filing for primary races in a couple of weeks, but they can’t do that if they don’t know which districts they’ll be in.

Much of the testimony over the five days of the hearing addressed this time crunch. The state’s attorneys said there’s no choice but to go with the maps we’ve got because changing them at this point would throw the election schedule into chaos. Plaintiffs pushed back, saying the voting rights of Black Arkansans take precedence over extra paperwork and rescheduling.

Those plaintiffs, the Arkansas chapter of the NAACP and the Arkansas Public Policy Panel, are asking Rudofsky for an injunction to scrap the disputed state House maps adopted in November by the all-white, all-Republican Board of Apportionment consisting of Governor Hutchinson, Attorney General Leslie Rutledge and Secretary of State John Thurston.

Arkansas gained nearly 30,000 Black people since the last redistricting process, and lost 110,000 white people. But the new maps adopted in November cut the number of House districts where Black voters make up the majority. While Arkansas is 16.5% Black, only 11 of the state’s 100 House districts are majority Black in the new plan, down from 12 in the maps used from 2011 to 2021. And because voting is so polarized in the state, only districts in which Black voters make up a majority have a good chance of sending their candidates of choice to the Capitol, according to political scientist and elections expert Lisa Handley, who testified for plaintiffs last week.

Attorneys from Rutledge’s office defended the maps adopted in November, arguing that Board of Apportionment members have a good deal of discretion while crafting them. Map drafters have to consider a number of factors to make the districts fair, with race being only one. Attorneys from the AG’s office argued that in fact, drafting a map with 16 majority Black districts out of Arkansas’s 100 House districts to closer reflect the state’s 16.5% Black population would be gerrymandering because such a redrafting would be based solely on race. They also called to testify political scientist Brad Lockerbie, a professor from East Carolina University who said he thought Black voters can win anywhere if they work hard enough.

In his closing argument, plaintiff’s attorney Bryan Sells noted that the increase in Arkansas’s Black population from the 2010 Census to the 2020 Census is nearly enough to constitute an entire House district. And the decrease in Arkansas’s white population represents enough people for three districts. And yet, the new map increases white voting power at the expense of Black voting power.

“This case presents a single, straightforward claim of vote dilution under Section 2 of the Voting Rights Act,” he said.

In light of the Supreme Court’s decision Monday to let a discriminatory Alabama map stand for now, Sells asked Rudofsky to consider allowing the 2022 election to proceed with the Board of Apportionment’s map but to require a special election in 2023 using a new map. But Sells also said it’s still possible for the state to move quickly to adopt a new map in time for 2022 elections. Sure, it will be extra work, but that’s always the case when governments have to fix discriminatory voting maps, he said.  “The burden on administrators does not outweigh the voting rights of Black voters.”

Plaintiffs submitted an illustrative map by cartographer Anthony Fairfax that proves House lines can be drawn to reflect the state’s updated demographics. And Sells noted that most of the issues the state complained about as a reason to not adopt the suggestions in Fairfax’s illustrative map are actually worse on the Board of Apportionment’s final map. For example, a number of people involved in crafting the Board of Apportionment’s map testified that avoiding precinct splits and not pitting incumbents against each other were priorities. Fairfax’s map includes only two paired incumbents, while the Board’s map puts 11 incumbents in districts where they will have to run against each other. Fairfax’s map splits 98 of the state’s 2,740 precincts. The map adopted in November splits 282 precincts.

“He beat them at their own game,” Sells said. “Mr. Fairfax’s plan complies with the Board’s stated goals better than the Board’s own plan does.”

The state’s attorneys did not offer a closing, but answered questions from the judge.

The hearing was informal throughout, but it got more so on Tuesday, with the afternoon devoted to conversations between the judge and the attorneys. Rudofsky pitched dozens of legalese-type questions to attorneys for both sides. The resulting exchanges, sprinkled with lots of Latin, were probably important, but there’s no way for regular people to know. Rudofsky would say things like, “I have a question on Sandoval vs. Ziggler, and that’s why I was pushing you so hard on the Morris question.” And attorneys would respond with things like, “I’d refer your attention to section 14E, which covers aggrieved parties outside the United States.” This went on for hours as the judge considered questions about jurisdiction, whether the parties had standing to sue, how this week’s United States Supreme Court decision affects the case, and what previous rulings on Voting Rights Act cases will mean for this case.

Rudofsky said he planned to spend Wednesday reviewing transcripts before making his decision and getting to work drafting his opinion.

“Expect a moderately lengthy to very lengthy opinion,” he said.