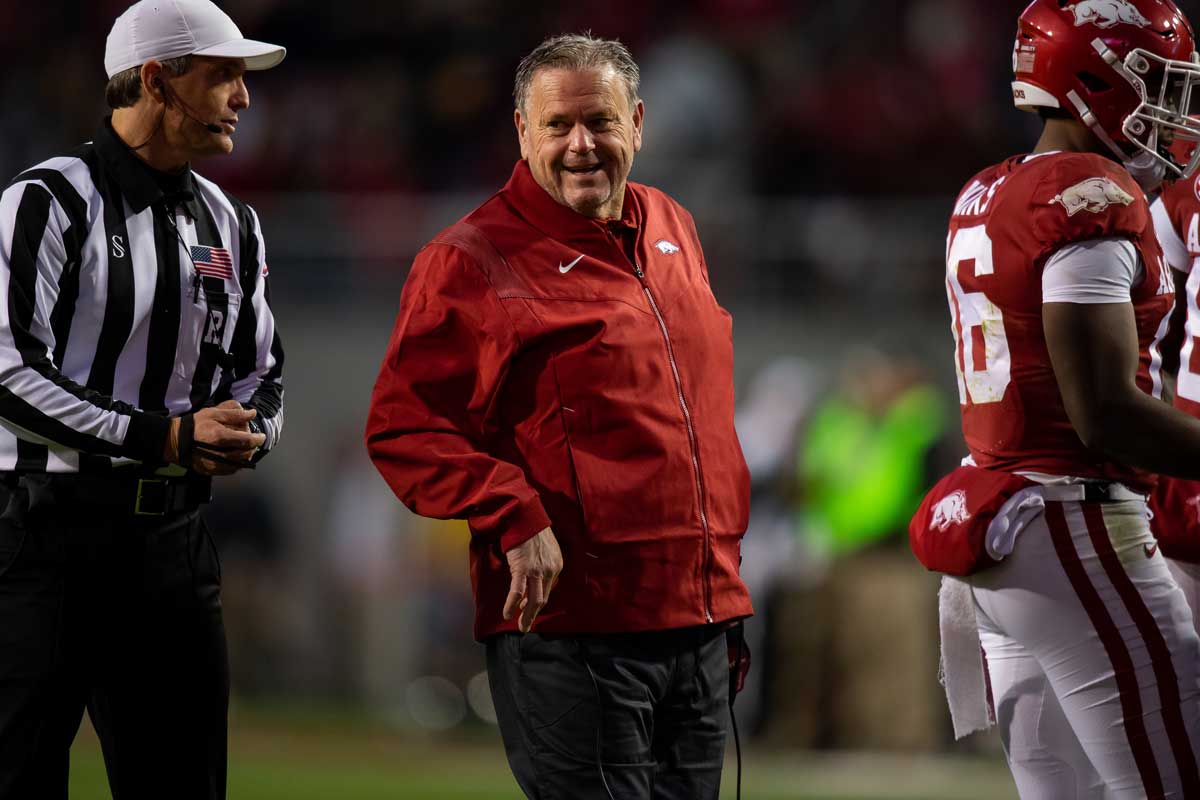 Sam Pittman came onto the hill in Fayetteville after two nightmare seasons of the Razorback football team going 2-10 and 0-8 in the SEC. From a recent Beau Wilcox Arkansas Times feature on the rise of the Hogs: “Pittman became the greatest rescuer of the program, full stop. The oddball, conference-only schedule in 2020, in largely empty stadiums, netted three big victories (a fourth was denied by the damnable SEC officials at Auburn). Then the Hogs’ rise turned meteoric in 2021 as they surged to a 9-4 season, an Outback Bowl thumping of Penn State, and a Top 25 ranking at season’s end for the first time since that accursed final poll from the first week of 2012.”

Yesterday the university announced that Pittman signed a new 5-year contract increasing his base compensation to $5 million annually. The contract is effective through Dec. 31, 2026, and could be extended an additional year if Pittman leads Arkansas to seven wins in any one season (inclusive of a bowl game against a Power 5 or Top 25 team) during the term of the contract.

On the heels of Arkansas’ most successful season on the football field in a decade, Head Coach Sam Pittman has signed a new contract with the University of Arkansas that increases his base compensation and extends his employment agreement through potentially the 2027 season based on on-field success.

“Coach Pittman and his staff have done a tremendous job quickly restoring the pride and belief in our football program,” Vice Chancellor and Director of Athletics Hunter Yurachek said. “There is no doubt, Coach Pittman has proven to be the right man to lead our football team. He has earned this opportunity with the success he and his staff have had on the field and on the recruiting trail. Last fall, we won four trophies, including one for our victory in the Outback Bowl, and enjoyed our best season in a decade, and I believe we’re just getting started. I look forward to continuing to work with Coach Pittman as we build our football program back to elite status.”

Terms of the new deal raise Pittman’s base salary to $5 million annually with compensation escalators based on the number of wins per season and incentive bonuses based on postseason success.

“Arkansas is where I want to be, this is my dream job,” Pittman said. “I am so grateful for our University and Hunter for believing in me, our coaches and staff and the program we’re building. We are all excited to continue to build on what we’ve done and continue to make our fans and the whole state of Arkansas proud of our football team.”

In just his first two seasons on The Hill, Pittman has put Arkansas back on the national scene. The Razorbacks won eight games combined in the three seasons prior to Pittman’s arrival before winning nine games in 2021, including an Outback Bowl victory over Penn State, for the program’s most wins in a decade. Arkansas finished the season ranked No. 21 in the Associated Press Poll and No. 20 in the USA Today Coaches’ Poll, ending the season ranked for the first time since 2011.

The Hogs started the 2021 season 4-0 and rose to No. 8 in the Associated Press poll early in the season – the team’s highest ranking since 2011 – and later set a program first by being ranked in consecutive College Football Playoff rankings after the Razorbacks beat No. 17 Mississippi State. For the first time in history, the Hogs also captured all three of the program’s trophy games, beating No. 7 Texas A&M in the Southwest Classic, winning at LSU to recapture the Golden Boot and topping Missouri in the season finale to earn the Battle Line Rivalry trophy. Pittman and the Razorbacks entered the postseason with eight wins – the most regular season victories at Arkansas since 2011 – before adding a fourth trophy to the case with a 24-10 win over the Nittany Lions in Tampa, Fla. at the Outback Bowl.

Pittman’s players have also been in the spotlight over the last two seasons. Linebacker Grant Morgan became the first Razorback in history to win the Burlsworth Trophy – given annually to the nation’s best player who started his career as a walk-on – and just the 16th Hog ever to earn Walter Camp Football Foundation All-America honors. Earlier this spring, Treylon Burks became the first Arkansas player to be selected in the first round of the NFL Draft since 2018 when Pittman protégé Frank Ragnow was taken 20th overall. Burks went 16th overall to Tennessee after being named a First-Team All-SEC wide receiver. Montaric Brown earned All-SEC first team honors this past season before being selected by the Jacksonville Jaguars. Burks and Brown were joined by John Ridgeway (Dallas Cowboys) to give Arkansas their most players selected in the NFL Draft since 2019.

Pittman’s program has also proven to be strong on the recruiting trail. The Razorbacks have hauled in consecutive Top 30 classes while also finding impact players in the transfer portal. This past fall, freshmen running backs Raheim Sanders and AJ Green along with wide receiver Ketron Jackson and defensive back Jayden Johnson all made significant contributions with Sanders being one of four Hogs to eclipse 500 yards rushing. The 2021 team also featured five impact players from the transfer portal, including Ridgeway.

Arkansas hosts seven games in Fayetteville for the first time ever this fall, beginning with Cincinnati at 2:30 p.m. on ESPN on Saturday, Sept. 3. The Razorbacks jump into conference play the following week against South Carolina at 11 a.m. on ESPN. A home date against Missouri State at 6 p.m. on Sept. 17 on ESPN+/SECN+ wraps up a three-game stretch at home to start the year. Donald W. Reynolds Razorback Stadium will also host Alabama (Oct. 1), Liberty (Nov. 5), LSU (Nov. 12) and Ole Miss (Nov. 19).

Season tickets for the 2022 season are now on sale. To purchase tickets click here or call the Razorback Ticket Center at 479.575.5151.