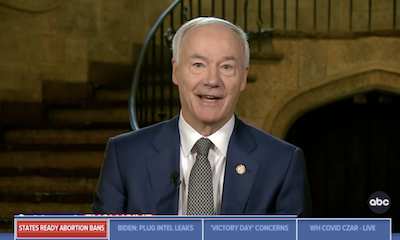 News by ABC’s lights: He said he would oppose a national abortion ban, as Republicans are expected to attempt in Congress someday.

News by my light: He offered a raw political calculus for why he supports exceptions for rape and incest victims, even though he signed a law in Arkansas that doesn’t include it and even though he endorses the view that life begins at conception.

He supports the total ban on abortions in Arkansas, which he says reflects the “will of the people.” The will of the legislature, maybe. University of Arkansas polling over two decades suggests otherwise. A small minority support illegal abortions in all cases and support for tougher abortion law has weakened in recent years.

He seems to think it’s good to address national division by overturning Roe v. Wade. At the same time, he said he expected division would continue.

Why do you support rape/incest exceptions, Raddatz asked? “Generally the public has insisted upon this  as being reasonable exceptions to abortion limitations.”  The accommodations are made to get public acceptance, he retirted. So no principle or compassion involved here, just politics.

He said a national ban on abortion would be inconsistent with state authority Republicans have long supported. He said there also might be a constitutional question of a national ban. I bet Sammy, Amy and Clarence and them would find \ constitutional support for a ban where they could not find one to protect abortion, should it come to that.

PS: The issue isn’t about exceptions or catchphrases some useful posts on Twitter instructs. For example:

“This ban doesn’t even have exceptions for r*pe or a person’s health.”

All reasons for having an abortion are equally valid. While both sexual assault and threats to a pregnant person’s health are very tragic situations deserving of care and compassion, centering only those reasons implies that abortion is more acceptable in these cases when the person is not “at fault.” It attaches blame to those who have abortions for other reasons. Whatever their reason, anyone who needs abortion care deserves access to it. It is not our business why they need an abortion.

Instead: “This ban strips away bodily autonomy for everyone who needs abortion care.”

And here are suggestions to avoid these, generally boiling down to the importance of abortion access, no explanation required.