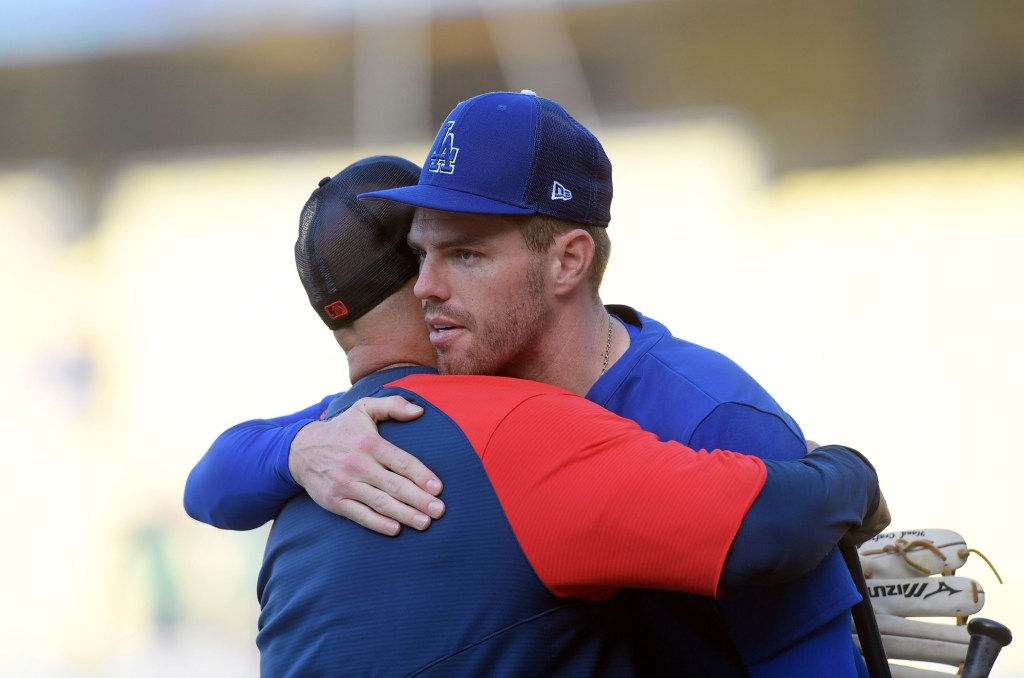 CINCINNATI — There are a lot of people looking forward in anticipation to Freddie Freeman’s return to Atlanta this weekend. None more so than his 5-year-old son Charlie.

“My son was really excited to go back,” Freddie said, his family having already flown ahead to their former home Tuesday. “He calls that ‘the cool house’ because he has his own playroom there.”

While Charlie enjoys the cool house, his father will be the center of attention for three packed houses at Truist Park. The Freeman family will be part of the reason for that – Freddie Freeman said he has rented a 52-person suite for the games Friday and Sunday, just a regular suite on Saturday.

“My family got there yesterday,” Freeman said, though his father and stepmother will not be part of the group, having recently tested positive for COVID.

“My grandpa’s there. I’ve got aunts. I’ve got cousins. My in-laws are coming to town. Obviously, I have my brother-in-law and sister-in-law that live there. My brother lives there with his family. … I’ve got a lot of people coming in. We’re all looking forward to it.”

The Braves will present Freeman with his 2021 World Series ring in a pregame ceremony Friday. Tears will undoubtedly be shed. Freeman will certainly get lengthy standing ovations before his first plate appearance each day – and any other time Braves fans feel the urge to acknowledge his contributions to the franchise over Freeman’s 12 seasons in the big leagues there.

More tears will undoubtedly be shed.

“I want to win so I’ve got to do my part to win these games. But there’s going to be a lot of tearing up. I don’t know how that first at-bat is going to go Friday – or Saturday because there will be new fans, a different crowd. It’s going to be a lot. I’m looking forward to it, but I’m looking forward to it being over so I can focus completely on baseball because I have been thinking about this for a long time.”

That is Freeman’s way of acknowledging the pain he felt over the way things ended with the Braves and how difficult it has been to put that chapter of his life behind him.

“Ever since I signed here, I’ve been looking forward to going back,” he acknowledged this week.

The Braves’ visit to Los Angeles in April – during which Freeman went 4 for 11 with his first two home runs as a Dodger – offered a chance to check in with friends and teammates he hadn’t seen since the championship parade in November. This weekend, however, has the potential for closure.

“I haven’t really been able to think about what happened the last 12 years (with the Braves),” Freeman said. “I signed three days after (the lockout ended) and I had to report. I really haven’t had my feet settled or all of that. I haven’t been able to think and appreciate everything that had gone on in Atlanta. It’s still like (waves his hands around his head).

“For me in April, it was just good to see everybody again because of all the relationships I had. This one is going to be a little different – because I get my ring on Friday. To me, it’s more than a ring. It’s everything – all the hard work in that organization for 15 years to reach that point, the pinnacle of your sport, and win a championship.”

Freeman said his wife, Chelsea, told him when she walked into their house in Atlanta this week, “she started bawling and crying.”

“The emotions are already going,” Freeman said. “There are a lot of memories.”

Those memories will be thick as the Atlanta humidity this weekend and Freeman said he doesn’t really know how he will react because he’s never “experienced” anything like this before. But he is confident of one thing – it won’t affect his ability to focus on the task at hand.

“There’s no distractions. It’s just the game to me,” Freeman said. “I know there’s a lot that’s gone on in my career there. But once I step foot on the field, it’s about the game for me and trying to win.”

Left-hander Caleb Ferguson threw a 20-pitch bullpen session Thursday and is expected to throw to hitters on Sunday in Atlanta. If that goes well, Dodgers manager Dave Roberts said, Ferguson will throw to hitters again next week and then could be activated when he is eligible. Ferguson is on the Injured List with forearm tendinitis.

Blake Treinen, meanwhile, continues his throwing program but has not progressed to throwing off a mound yet.

“It’s a good, firm throw from 90 feet but it’s not just letting it go,” Roberts said. “I think we’re a couple weeks away from seeing him get off a mound, that’s what I see.”

Treinen has been on the IL with an injured shoulder since April. The Dodgers have projected a return at some point in the second half of the season.