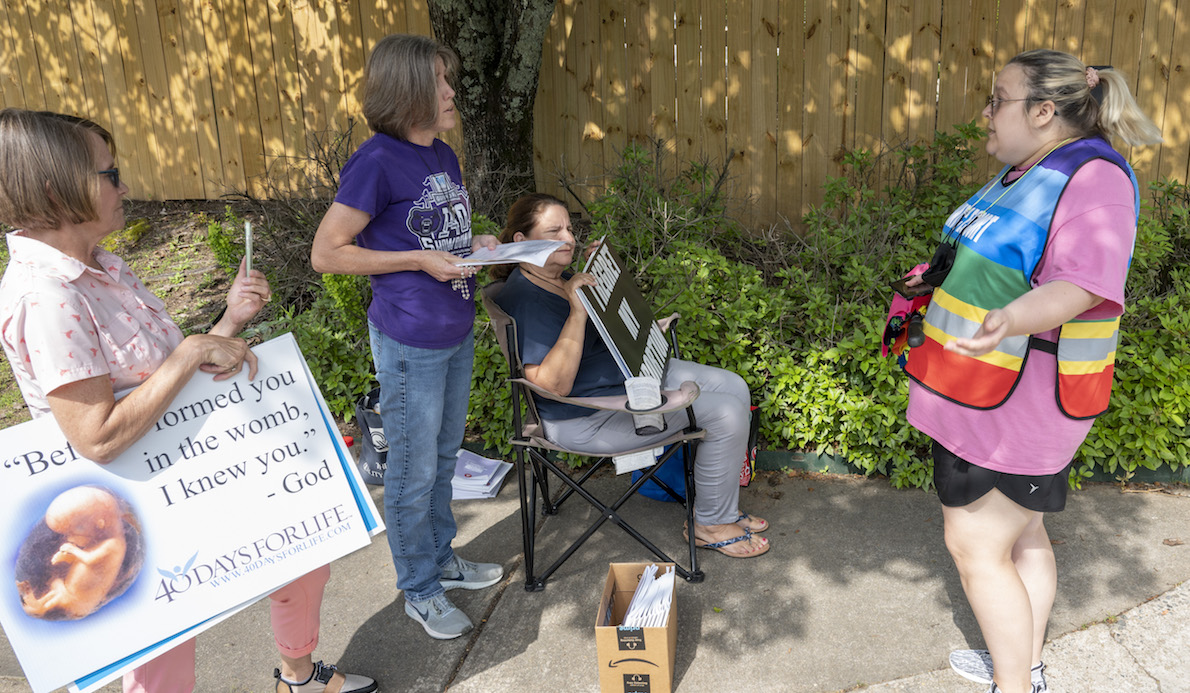 Abortion rights and their eminent demise being the topic of the day, we headed over to Little Rock Family Planning Services 9 a.m. Tuesday to see how the usual suspects were taking the news. The clinic in West Little Rock, the only spot in Arkansas dedicated to providing surgical abortions, attracts a small but steady crew of protesters. It also draws a dedicated corps of clinic escorts in cheerful rainbow vests and umbrellas, whose job is to make sure patients get safely into and out of the clinic unharassed.

A draft of a Supreme Court opinion leaked this month all but insures time is running out on clinics like this one in states like Arkansas, where Republican leaders have attacked abortion access for years and are eager to end it as soon as the Supreme Court repeals protections set in 1973 by the Roe v. Wade decision. The only question in Arkansas now is of which ban will go into effect. Multiple versions are on the books. As a Daily Beast writer reported today, Arkansas had a total ban in place before Roe, and passed a trigger ban in 2021 to stop all abortions except to save the life of the mother as soon as the Supreme Court allows it.

In the meantime, Little Rock Family Planning Services is open and operating for elective abortions.

A man in a hot pink safety vest was stationed near the corner Tuesday morning, waving cars over when they turned on to the street. “Are you looking for the dentist’s office?” he asked through my passenger window. No, I’m going there, I said, gesturing down the block to a brick building wrapped in a wooden privacy fence. The man offered a free ultrasound, which are available at the crisis pregnancy center next to the abortion clinic. Sandwich boards in front of the Arkansas Pregnancy Resource Center advertise free pregnancy testing and abortion pill reversal services.

I declined, and he offered me a booklet with a sleeping baby on the front and a gossamer sachet shrouding a gummy, stretchy, oddly colored fetus figurine. The man was quiet and polite, and I felt a little sad to think these alien-like rubber fetuses he gives out in an effort to make women rethink things probably harm his cause more than help. Any woman harboring such an off-putting creature could hardly be blamed for wanting to be rid of it ASAP.

Three clinic escorts hovered just inside the fence opening at Little Rock Family Planning Services, while an equal number of protesters milled around the sidewalk out front. A Stone Temple Pilots song blared from a speaker one of the escorts wore on his belt. Otherwise, all was quiet. Four women with protest signs clustered in a shady spot at the entrance, while the trio of escorts stood a few feet away, just inside the clinic’s property line. Both protesters and escorts tend to show up for the same shifts week in and week out, and therefore end up spending lots of time together.

A car pulled out from the clinic lot, empty but for the woman driving, a booster seat installed in the back.

Protesters sometimes take pictures or video of the cars coming and going, Arkansas Abortion Support Network co-founder Karen Musick said. But none of that was happening Tuesday morning. Some of the men who come to protest at the clinic wear cameras affixed low on their torsos to snap photos of cars  and license plates. “We call them crotch cameras,” Musick said.

Musick volunteers at the clinic Tuesday through Friday, and helps schedule the corps of roughly 70 other volunteers who’ve passed background checks and a two-hour virtual training to earn their rainbow stripes.

Sarah Samuels drives in from Cabot to escort patients every Tuesday. Her husband, an air traffic controller, is usually at work then, but this week he was off and joined her for a shift. “I convinced him it would be a fun couples activity,” she said. Anyone who helps planes launch and land safely seems uniquely suited for this delicate operation.

Samuels started volunteering as a clinic escort in 2020. “I’m just passionate about choice, for myself and everybody else who needs it.” She seemed unfazed by a car in the patients’ parking area with an out-of-state license plate and a “Trump 2024” bumper sticker. Abortion care is still available in Arkansas for everyone, regardless of their politics, at least for another few weeks. “This happens all the time,” she said about the Trump sticker and its anti-choice insinuations. That patient gets the same smiling welcome and soothing smalltalk, the same subtle shielding from view with a rainbow umbrella, as anyone else.

Another car driven by a lone woman left the lot, this one more battered, another carseat visible in the back. A white sedan with its license plate removed pulled in.

The protesters politely declined requests for interviews. “That’s funny that they won’t talk to you, because they talk to me all the time,” Musick said, loudly enough for all to hear. “They call me a demon.” One of the protesters, rosary in one hand and a poster with a Bible verse in the other, said that’s not true.

A car pulled up outside the fence, and Marsha Boss got out to unload a camp chair and an “I REGRET MY ABORTION” poster. Governor Hutchinson appointed Boss, a pharmacist, to the state Board of Health in 2018. Musick said Boss is a regular protester at the West Little Rock clinic.

The street and sidewalks were mostly empty, no other cars or people. Still, Boss didn’t budge from her straight path down the sidewalk and bumped into Samuels, who had positioned herself in the center of the clinic parking lot entrance.

“Did you really just bump into me?” Samuel demanded. “If you do that again I’ll call the fucking police!”

“You were taking up the whole sidewalk,” Boss fired back, then offered an apology. The two bickered, and one of the protesters started filming with her cell phone. “I already said I’m sorry. Let’s just pray,” Boss said.