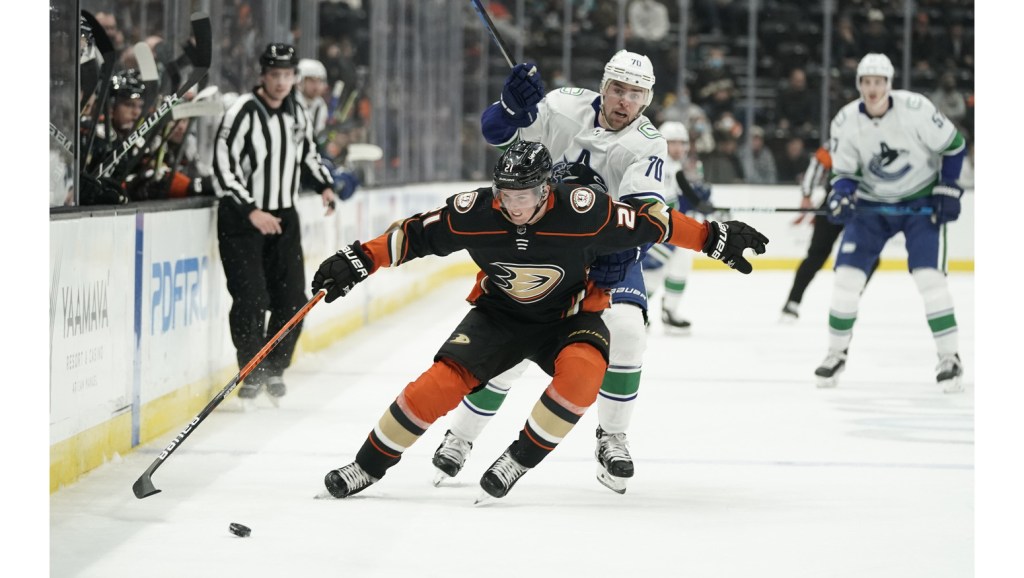 ANAHEIM — Positive or negative? Healthy or injured? Rested or rusted?

The Ducks faced those and many other questions when they returned to the Honda Center ice Wednesday to face the Vancouver Canucks, their first game since Dec. 17, after four consecutive games were postponed because of the increase in COVID-19 cases around North America.

In the end, the answers were not very pleasing for the Ducks, who dropped a 2-1 overtime decision to the Canucks, Vancouver’s seventh consecutive victory under new coach Bruce Boudreau. The Ducks were rested but rusty, shorthanded, sloppy and generally out of sync after their layoff.

Vancouver’s J.T. Miller scored on a breakaway 26 seconds into the extra period, after the Ducks mangled a three-on-one scoring chance. Goaltender John Gibson stayed in his net rather than chase after the puck after Miller poked it ahead to free himself from the Ducks pursuing him.

Miller then ripped a shot over Gibson’s left shoulder.

Tanner Pearson scored the tying goal 1:21 into the third period for the Canucks after Sam Carrick had given the Ducks a 1-0 lead at 16:26 of the first. The Ducks didn’t lack opportunities to extend their lead, but 23 of their 64 shots directed at the net missed the mark, and another 18 were blocked.

Meanwhile, the list of the Ducks’ sidelined players grew by one more. Defenseman Cam Fowler suffered an upper-body injury when he crashed into the boards after a collision with Vancouver’s Quinn Hughes late in the first period, striking his head and left shoulder after an awkward fall.

“We’ll know more on Cam tomorrow,” Ducks coach Dallas Eakins said. “We’ll see how it reacts overnight. We’ve been lucky so far this year with our top five ‘D,’ well, all of our ‘D’ staying healthy. Cam leads the way back there with minutes played. He eats a lot of minutes and plays against the other team’s top line. Him leaving the game certainly affects our game greatly.”

The Ducks were already without forwards Max Comtois, Sam Steel and Trevor Zegras, who were in the NHL’s COVID-19 protocol and unavailable to play. Steel is eligible to return to practice Thursday, but he must provide a negative COVID-19 test before he can rejoin his teammates.

Left wings Adam Henrique (lower body) and Max Jones (torn pectoral tendon) and defenseman Josh Mahura (upper body) remained on injured reserve. Jones also was in the protocol, a double-whammy. Henrique sat out for the eighth game, Jones for the 30th and Mahura for the third.

Eakins referred to Zegras, Comtois and Henrique as three of the top six.

Fowler’s absence, if prolonged, could prove every bit as difficult to overcome.

After all, the Ducks played the season’s first 32 games without any of their top five defensemen sidelined because of an illness or injury. The health of Fowler, Jamie Drysdale, Hampus Lindholm, Josh Manson and Kevin Shattenkirk was one of the major reasons for their early-season success.

Fowler’s status for the Ducks’ game Friday against the Golden Knights in Las Vegas was uncertain. Fowler went into Wednesday’s game as the second-leading scorer among their defensemen with 17 points, including four goals, and he also was their leader in average ice time (23:36).

Carrick had given the Ducks a 1-0 lead by the time Fowler left the game, converting on a breakaway after Nicolas Deslauriers freed him from a pack of Vancouver defenders with an alert breakout pass. Lindholm also assisted on Carrick’s seventh goal of the season.

Carrick was among the Ducks’ most effective players, not only scoring a goal late in the first period but also generally being a bull with the puck on his stick. He also drew a holding penalty on Hughes when the Ducks were killing a penalty to Ryan Getzlaf midway through the second period.

“All things considered, I thought things were pretty good,” Carrick said. “Our game plan was to play a simple game and try to wear them down by getting pucks deep and limiting our turnovers, especially through the neutral zone. That’s where they get their offense. After that long break, it was a nice little refresh for us to kind of reflect back on the first half of the season.

“We were all pretty excited to get back on the grind.”