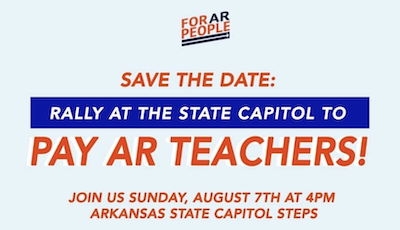 With Republican leadership firmly opposed — but feeling the heat — Democrats in the legislature are forging ahead with a plan to raise teacher pay, drawing on several sources, including the surplus the legislature wants to tap to cut income taxes for the rich.

The Democrats have a few Republican allies. They hope to enlist Governor Hutchinson and met with him today. He’s said previously he won’t add teacher pay to the call for a session to cut taxes on the wealthy because the support isn’t there.

Pressing on is worthwhile. The message seems to be reaching many Arkansans that the legislature is content to pay a starting teacher less than the legislators make for part-time work (way less when you consider the expense account padding done by the likes of Sen. Alan Clark of Hot Springs (for per diem purposes) and Lonsdale (too close to qualify for the big per diem bucks.) The legislature’s ill-conceived and problem-riddled proposal to pay teachers a bonus with federal pandemic relief money is a sign they are feeling the heat.

Arkansas House and Senate Democrats released a plan today to raise teacher salaries by $4,000 and raise the minimum teacher salary from $36,000 to $42,000. The Raising Arkansas’s Investment in Schools and Educators (RAISE) Act would use $600 million from the estimated $1.6 billion surplus to create a fund that will allow the raises to be indefinitely sustainable based on current projections. Democrats urged Governor Asa Hutchinson to include their proposed legislation in the August special session so that teachers can get a raise now.

“We ask so much of our teachers. They often spend money out of their own pocket for basic classroom supplies. As much as they love what they do, many are leaving the profession or moving to states that pay their teachers adequately. We have to do much more to ensure that we are recruiting and retaining great teachers. That starts with a fair salary,” said House Minority Leader Rep. Tippi McCullough (D-Little Rock), a former public school teacher.

“We all want a more skilled workforce, a growing economy, and stronger communities. All this starts with great teachers, which is why we’ve got to offer salaries that match our expectations, their qualifications, and the demands of the regional market. We don’t have to lag behind our neighboring states,” said Rep. Andrew Collins (D-Little Rock).

Under the RAISE Act, a Teacher Pay Sustainability Fund (TPSF) would be established to allow for an immediate and sustainable increase in teacher pay. The availability of other funding streams for teacher pay means that the $600 million in the TPSF would be needed primarily in the short term, then less as other funding streams increase, and then none at all. A major category of school district funding – the “foundation funding” determined by “the matrix” – is routinely increased on a biennial basis. Based on recent history, Democrats project a biennial increase in foundation funding of approximately $225 per pupil. Slightly over half of this increase is attributed to teacher salaries based on the proportion of overall foundation funding that is used for teacher salaries. Additionally, the Arkansas Department of Education (ADE) has identified an estimated $60 million per year in separate revenues that it is willing to allocate to teacher raises.

Based on these projections, the TPSF would only need to be utilized through FY 2027. After FY 2027, the $42,000 minimum teacher salary could be afforded solely by increases in foundation funding and ADE additional revenues with no further contribution necessary from the TPSF. Furthermore, the TPSF would have a balance of over $200 million after FY 2027, a comfortable cushion that would help ensure that the raises are funded even in the case of deviation from current projections.

“Republican legislative leaders have said they expect foundation funding to eventually increase. We are glad to hear that and expect the same,” said Rep. Megan Godfrey (D-Springdale), a former public school teacher. “But we can’t afford to wait. Our fund fills in the gap to allow teachers to get a raise right now, while we’re waiting for foundation funding to catch up to the needs of our teachers and state.”

The RAISE Act replicates a fund that the Legislature used to increase minimum salaries by statute in 2019. Democrats met with Governor Asa Hutchinson today and urged him to back the RAISE Act and include teacher raises among topics for an anticipated August special session of the Legislature.

The Democrats’ proposed allocation of $600 million in surplus to teacher raises would leave an estimated $1 billion in remaining surplus.

“After raising teacher pay, we can use our remaining billion-dollar surplus for other essential needs like adequately paying our bus drivers, custodians, and other classified and support staff. The RAISE Act is a big step toward improving education throughout our state, but it’s just the beginning of what we need to do,” said Rep. Reginald Murdock (D-Marianna).