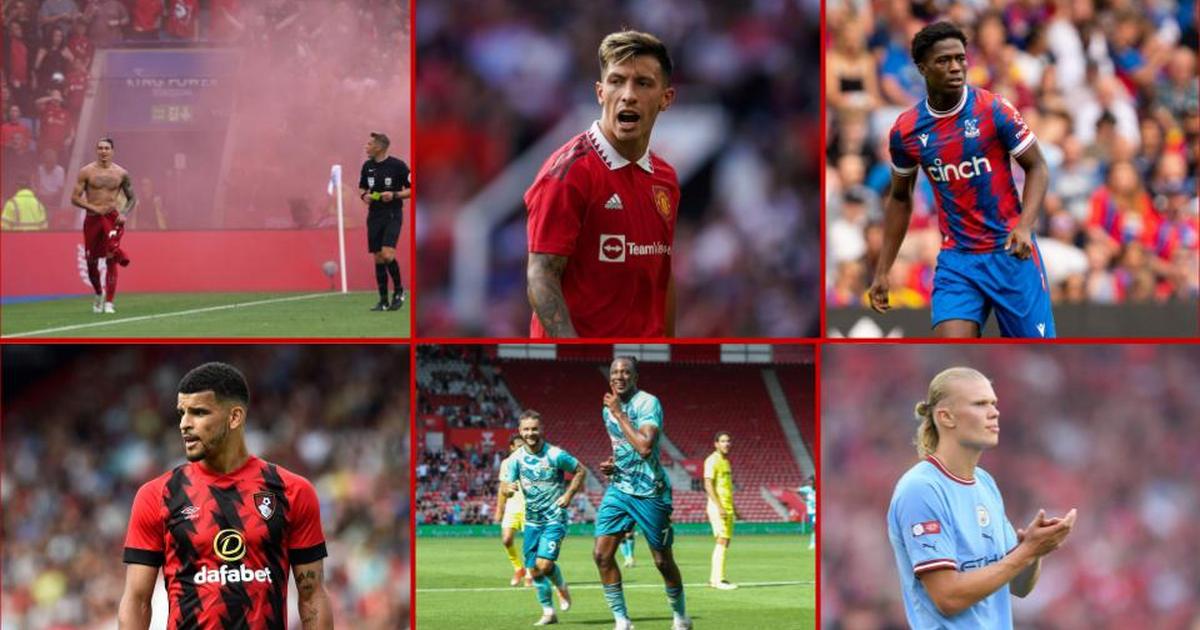 Pulse Sports Nigeria takes you through 20 players you should keep an eye on in this season’s most popular league in the world.


Premier League players to watch out for in the 22/23 season;


The British-born Nigerian forward just put pen to paper on a new four-year contract to stay at Bournemouth.

In his last season in the PL, he managed just three (3) goals in 17 appearances in the 2019/20 season. So, all eyes will be on him to see if he can do better to help Bournemouth avoid relegation.


The Brazilian has been on fire in pre-season following his move to Arsenal from Manchester City in the summer.


With two hat-tricks to kick start his career with the Gunners, Gabriel Jesus comes with a reputation for goals.

In 99 starts for Manchester City, he scored 53 goals and assisted 23 others. Mikel Arteta and Arsenal would be hoping he can replicate that form for the Gunners starting with the game against Palace on Friday.


The former Liverpool man seems to have found his love for the game again after he initially joined Aston Villa, coached by his former teammate, Steve Gerrard, on loan last winter.

Coutinho impressed enough to earn a permanent stay at Villa Park after he scored five (5) and assisted three (3) in 19 matches for the Villians.


With the Brazilian seemingly back to his best, Gerrard and Villa fans will be hoping to see more from him as they eye to finish higher than the 14th place from last season.


The Super Eagles defensive midfielder joined the newly promoted outfit last season in what was his debut season in English football.

He went on to feature 20 times in the league with 12 starts. Onyeka is fondly called “The Tank” at the club and he will be looking to live up to that name with better performances this season.


A lot will depend on if Brighton can hold on to their Spanish gem who is a hot property at the moment.


Manchester City, Chelsea and Barcelona all want the brilliant versatile defender who stood out for the Seagulls in his debut campaign last season.

Brighton will do well to keep Cucurella, who has built a reputation as one of the most creative defenders in the PL. Only Trent Alexander-Arnold (51) and Reece James (42) created more chances from open play than Cucurella (40).


Having joined the Blues following a productive and successful seven years at the Etihad with champions, Manchester City, Raheem Sterling will be the centre of attraction at Stamford Bridge.

With a remarkable record of 131 goals and 74 assists for City, the 27-year-old comes with a solid reputation for goals.


Sterling surely adds enough firepower to a team in need of it and it is left to be seen if the English man can provide Thomas Tuchel the needed ammunition.


After he reportedly rejected a move to giant Manchester United, Malcolm Ebiowei will be one player to keep a close tab on at Palace.


He looked lively during the pre-season game for the Eagles at Manchester United and will get to show why he is highly-rated.

Despite being just 18 years old, Ebiowei has joined the Patrick Vieira revolution at Selhurst Park and alongside Michael Olise, Eberechi Eze and Wilfred Zaha will provide the needed firepower for the Eagles.


The Nigerian playmaker was instrumental as Everton avoided the drop last season in the Premier League.


Iwobi has turned out of be one of Frank Lampard’s trusted soldiers and will be called upon once again as the former Chelsea man look to ensure a smoother campaign.

The Nigerian international will also be looking to improve on his two goals and two assists from last season while also hoping to get a more attack-minded role after playing as a wingback last season.


Mitrovic broke every available goals record in the championship last season to lead Fulham back into the Premier League.


The Serbian scored a ridiculous 43 goals in 44 games and assisted seven (7) others in a record-breaking campaign.

However, the last time he played in the Premier League, he only managed three (3) goals and three (3) assists. But he remains one player Marco Silva and Fulham will put their hopes on.


Alongside Nigeria’s Cyriel Dessers, Luis Sinisterra was crucial in Feyenoord’s run to the final of the Europa Conference League last season.


The highly-rated Colombia is a new arrival at Leeds who have had a busy summer as they look to ensure a calmer season.

Sinisterra, 23, will bring excitement and goals for the Lily Whites. He scored 12 and assisted seven (7) last season in the Eredivisie. Leeds will need a repeat from him in the PL.


Another Super Eagles star on this list is Wilfred Ndidi of Leicester City. The defensive midfielder had an injury-blighted 2021/22 campaign.


Ndidi was reduced to just 19 appearances and 18 starts for the Foxes last season.

The 25-year-old is one of the most important players for Brendan Rodgers and will be looking to get back to his usual form for the Foxes.


Going into the season, Darwin Nunez is the one player everyone is looking forward to seeing at Liverpool. Nunez scored 26 goals in 28 appearances last season and already has one official goal for Liverpool after coming on to score in the 3-1 defeat of Manchester City in the Community Shield.

Forget about Mohamed Salah and Luiz Dias, the €100m summer signing from Benfica is the player fans want to see at Anfield, alongside Manchester City’s Erling Haaland.


Nunez started his Liverpool career on a slow and was expectedly trolled on social media. But he has bounced back and led the Reds to Community Shield glory against Haaland’s City.


The City forward is another player fans will keep eyes on next season. While Erling Haaland needs no introduction, his debut in English football didn’t go to plan.


Haaland looked off in the community shield against Liverpool last weekend and will have to do better in his next outing.

But Pep Guardiola and City know what they have, a player born to score goals. Haaland scored 22 goals in 24 appearances last season in the Bundesliga.


The Argentine is one of three summer signings at Manchester United as new manager, Erik Ten Hag, looks to rebuild the Red Devils.

A lot has been said about the former Ajax defender and his height, but in Martinez, United has signed a technically aggressive defender who will surely help improve the team.


Martinez and his versatility could prove to be a key point for United in the new season.


Newcastle United pulled off a coup last winter to sign the Brazilian playmaker from Ligue 1 side Lyon.


Guimaraes put on a show in his first six months in the Premier League, scoring five (5) and one assist in 11 starts for the Magpies.

He arrived with Newcastle in relegation zone but by the end of the season, they were looking comfortable and safe with Bruno a key factor. In his first full season, he will be one of Eddie Howe’s key players as Newcastle United look to progress further under the new owners.


Nigerian striker Taiwo Awoniyi is the record signing at the promoted side after he joined from Union Berlin in the summer.


In his debut season, Nigerians will pay particular attention on the former Liverpool youngster to see if he has enough ammunition to help Forest keep their PL status.

Awoniyi scored 15 goals in 31 matches last season for modest German side, Union Berlin. Anything close to that in his PL debut will be brilliant.


Another Super Eagles star that will be the centre of attraction in the Premier League is former Rangers star, Joe Aribo.


Aribo has swapped Ibrox for St. Mary’s and is already looking ready for his debut campaign in the PL.

The Saints and Aribo have a dreamy but tough start that sees them face Spurs, Manchester United and Chelsea in their opening five matches. They will need some of those eight (8) and five (5) assists the playmaker delivered for Rangers last season.


The Croatian left Inter Milan on a free transfer to rejoin his former boss at Inter, Antonio Conte at Tottenham.


Perisic is already making waves on FPL where he is seen as a value for money option. He is owned by over 29% managers and valued at just £5.5m.

And that’s because with 19 goals contributions for Inter last season, Perisic under Conte could be one of the signings of the summer even at the age 33.

Given his productivity continues to improve per season, the 25-year-old could be set for his best season yet in the competitive league.


In Pedro Neto, they have a very talented forward. Last season was blighted by injuries for the Portuguese youngster who was limited to just 13 appearances in the league.

Wolves supporters will be hoping the 22-year-old can stay fit to help the club with his lovely footwork and keen eye for goals in the new season.