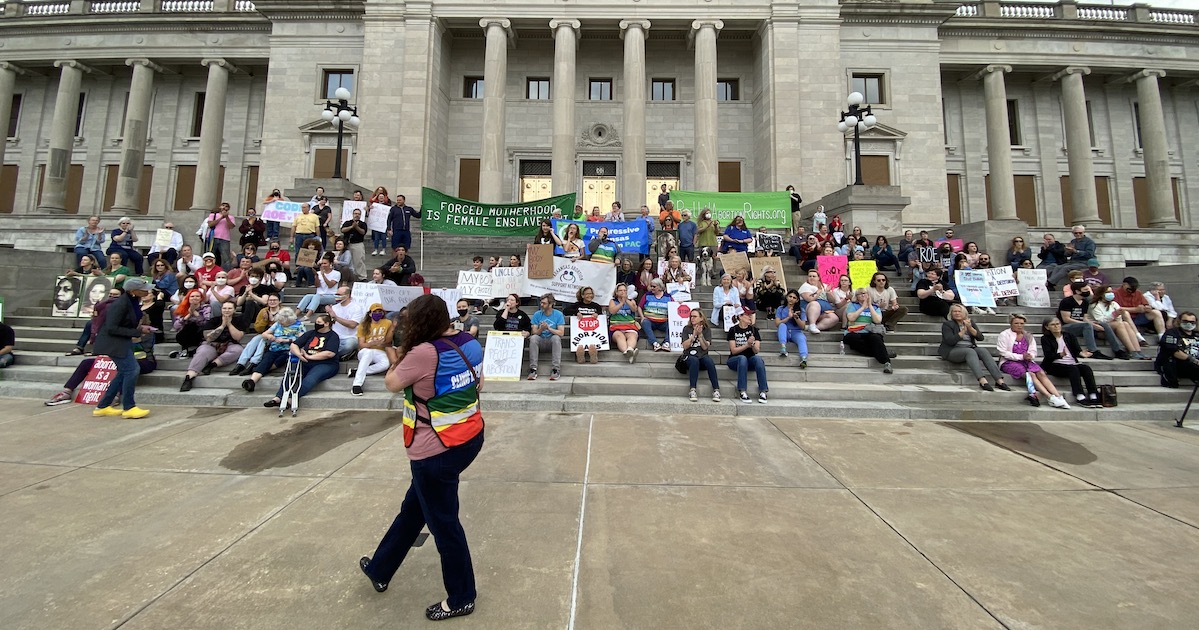 Republicans have also been passing so-called “stand your ground” laws that permit lethal self-defense in an expanded array of situations. You may think this part of some consistent worldview, but actually these two initiatives are quite contrary, so much so that we must ask: Can abortion be permitted under “stand your ground” statutes?

So in 2021, the Arkansas General Assembly passed Act 250, officially called, “An Act Concerning the Defense of a Person with the Use of Physical Force or Deadly Physical Force.” This act opens by stating: “A person is justified in using physical force upon another person to defend himself or herself or a third person from what the person reasonably believes to be the use or imminent use of unlawful physical force by that other person, and the person may use a degree of physical force that he or she reasonably believes to be necessary.”

Now, let’s examine this paragraph from the perspective of a woman whose pregnancy threatens her physical or mental health. Arkansas’s trigger law makes no exception for victims of rape or incest or for fetal anomalies. Act 308 of 2021 specifically outlaws abortions for any reason but “to save the life of a pregnant woman in a medical emergency.”

But would a woman be justified in receiving an abortion under the “stand your ground” statute? First, she must “reasonably believe” herself to be the subject of “the use or imminent use of unlawful physical force” by the fetus in question. The phrase “reasonably believe” in many of these laws is rather vague and thus open to a variety of abuses, but if a woman so receives a diagnosis from a licensed medical professional, then we can certainly say that she has reason to believe that her health is threatened.

Second, we must consider the nature of the “unlawful physical force by that other person”—i.e., the fetus in question. For my part, I would not consider a fetus to be a person, but the current Republican ideology assigns personhood to a clump of cells at the very moment of conception, so let us assign, for purposes of this exercise, full personhood status to the fetus in question in light of this law.

Third, is this person using “unlawful physical force”? Well, the very presence of this person threatens to damage the health, or end the life, of another, and such a use of force must be considered unlawful. It does not matter that the person in question, the fetus, lacks any intent to harm or destroy the life of another. After all, we make no exceptions from legal consequences for people who were drunk or under the influence of drugs at the time they perpetrated their crimes, and thus should we make no exceptions for people who were multicellular globs lacking consciousness. In no sense can killing or harming an innocent person be anything but “unlawful violence.” (Too, if the person — fetus — in question is present as a result of rape or incest, is that fetus lawfully present? Hell, isn’t any fetus committing an act of criminal trespassing if its presence is unwanted and it refuses to comply with orders to vacate the premises?)

Fourth, under Act 250, not only can one exercise “physical force” against threats one faces personally, but one can also exercise such force in defense of a third person who is the target of violence. That is to say: not only can I whip out a gun to defend myself from attack, but I can also defend you. So it would not be left to a pregnant woman to defend herself from the violent attack of a fetus, but rather a doctor could also employ “a degree of physical force that he or she reasonably believes to be necessary in order to defend said woman.

Section 2 of Act 250 amends the Arkansas Code to permit the use of “deadly physical force in defense of a person” in cases where the other person is “imminently endangering the person’s life or imminently about to victimize the person.” Such a person is not required to retreat but may use deadly physical force if she “reasonably believes” that such force is required in order to avoid death or “serious physical injury.”

Now, Republicans being Republicans, they could not help themselves but had to insert a little fetus worship into Act 250. Section 3, for example, permits the “use of physical force by a pregnant woman in defense of her unborn child.” “Unborn child,” in this context, is defined as “the offspring of human beings from conception until birth.” However, this section of the law simply reiterates what has already been stated, but with “unborn child” taking the place of the third person whom one might use deadly physical force to defend. This section does nothing to specify what sort of violence is permitted or not permitted when the threat is the unborn child itself and does not offer the unborn child any protections aside from what the mother may wish to bestow upon it. Moreover, if a child is a person, then an unborn child (defined as existing “from conception until birth”) can constitute the sort of person who can exert “unlawful physical force” and against whom one “is justified in using physical force.”

No matter what laws against abortion take effect after the Supreme Court’s decision, our leaders here in Arkansas have already given women the right to stand their ground. Hallelujah.