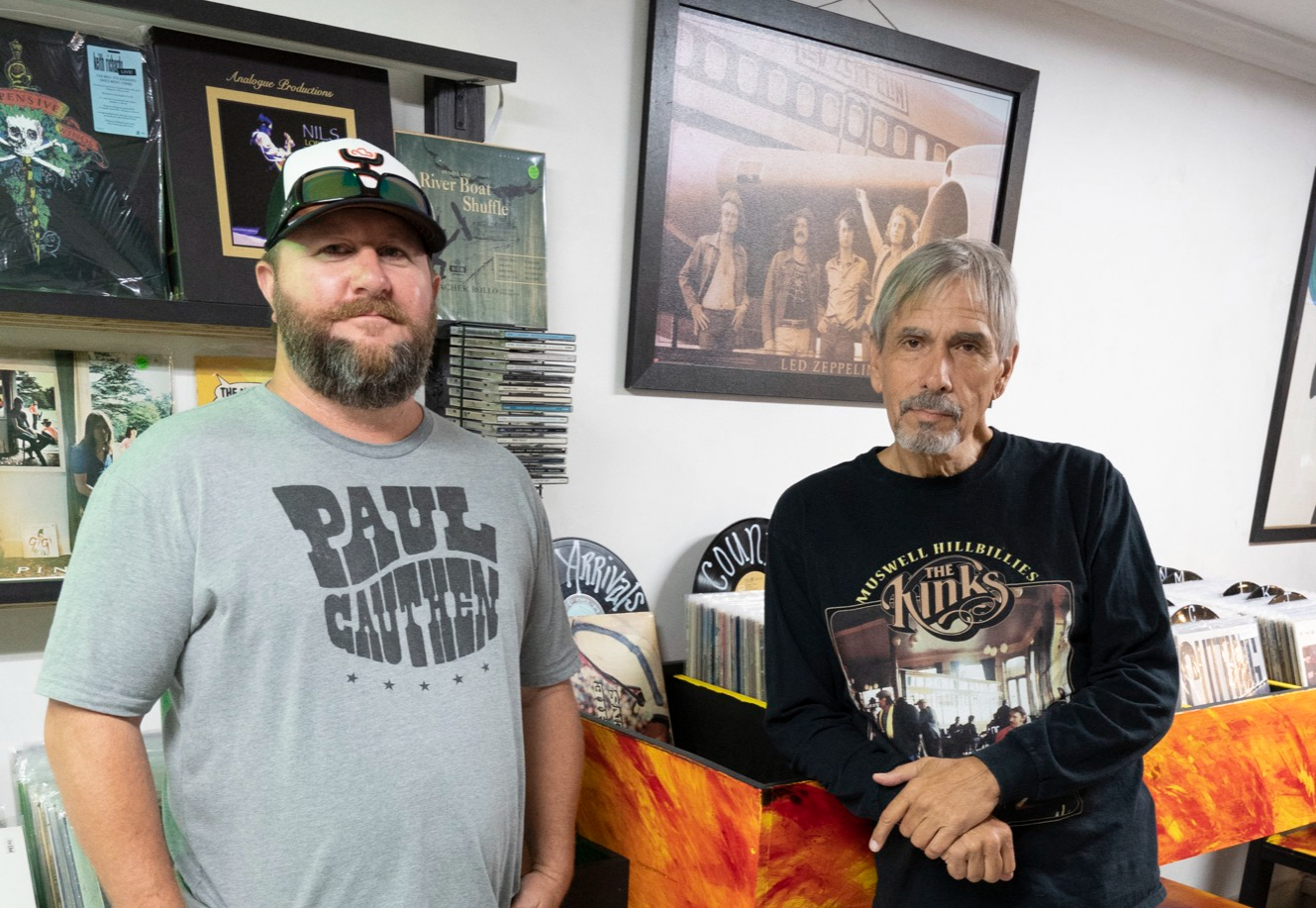 On Monday around lunchtime, a Facebook post circulated among musicians and vinyl collectors noting the arrival of a new record shop in the basement of the Arlington Hotel Resort Hotel & Spa, a hulk of a structure in downtown Hot Springs that opened its arms in 1875 to the upper crust who came for the town’s healing thermal spring waters and libertine charms — Babe Ruth and Al Capone among them. The hotel’s “basement” is a sort of precursor to the shopping mall, with a handful of ventures (Mamoo’s Creamery, for one) doing business among the vestiges of the bathhouse district’s heyday — vintage mosaic tile, an antique barbershop swivel chair.

The newest of those underground storefront enterprises is the Downtown Record & CD Emporium, a 4-day-old vinyl record shop owned by vinyl lifer Tom Coleman. Buy, sell, trade, or just come in and look around. 78s, 45s, cassettes, CDs. The shop will do a soft opening this month and a grand opening on Friday, Sept. 2, in conjunction with Hot Springs’ monthly First Friday Gallery Walk.

Coleman is not new to the line of work; Downtown Record is his fifth record shop since he started selling vinyl in 1981. “I actually thought I was out of the business,” Coleman told me, “but it kept dragging me back.” He’s been hooked on vinyl for decades now. He bought his first record as a kid for $4.98 at Rose’s Drug Store in Lubbock, Texas — The Beatles’ 1964 release “Something New.” He’s a devotee to the analog medium, and listens to music at home on a McIntosh tube amp system.

His first shop — Play It Again Records in Chattanooga, Tennessee — was “more like a ‘High Fidelity’ store,” he said. “We were a bunch of music snobs and anybody who was listening to Madonna or anything like that at the time, we were totally against.” These days, though, Coleman seems anything but narrow-minded about music. Before I and Arkansas Times photographer Brian Chilson left the building, the three of us, plus Coleman’s partner Beau Baize, had covered territory that ranged from The Clash to The Church to the glories of Paul Cauthen to Coleman’s studies of the Ars nova, a medieval treatise that rocked the music world in 14th-century France.

Nor is Coleman stranger to the vinyl shops elsewhere in the area. He’s a big fan of Bill Eginton and the Arkansas Record & CD Exchange, and spoke highly about Control Records and Been Around. “Little Rock is blessed,” he said. “I’ve been in large cities that didn’t have that many good record stores.”

Over the years, Coleman ran record and vinyl memorabilia shops in Knoxville and Laguna Beach, California. When Katrina hit, his mother was living in Waveland, Mississippi — ground zero for the hurricane’s devastation. She watched as her home and belongings washed away into the sea, and when Coleman broached the subject of where she might relocate, she said she thought Hot Springs might be nice. He’d intended to get her settled and move elsewhere, but when she got ill, he decided to stick around.

Coleman bought CDs For Less, a music shop on Hot Springs’ Albert Pike Road, eventually upended around 2010 when Popeye’s Chicken bought the land. And Coleman “went back to being a collector again.” Until about a month and a half ago, that is, when the owners of Benton-based record shop Retro Rose put their Arlington storefront — then a small-scale record shop called The Loud Library — on the market, and Coleman grabbed it up.

The shelves in the front room of Downtown Record & CD Exchange are full — a small country music shelf, loads of Rolling Stones and ’70s rock and a section labeled “Vapors,” inspired by Hot Springs’ famous nightclub. By the time the grand opening rolls around in September, the back room will be stocked, too. And what’s there is a fraction of of Coleman’s and Baize’s collection, the upper echelon of which leans toward rare Rolling Stones records, white label promos for The Kinks records, and sought-after stuff from The Dickies, New Order, Joy Division. Some of Coleman’s collection came from his connections to the creators of Hits Magazine, one of whom decided to liquidate a choice vinyl collection during the CD era and gave Coleman first dibs. “It was like walking into Tut’s tomb,” he said. Still, he said, he really doesn’t collect anything for the sake of rarity, or by bands he’s not a fan of. “I’m more inclined toward the things that just make me happy,” he said.

All told, I left there with some Odetta, T-Rex, a copy of The Andrews Sisters’ greatest hits (signed by Maxene!) and a saucy-looking cabaret comedy collection from Downtown Records’ “Sleazy Listening” shelf, recorded by an English actress named Elsa Lanchester, who sang songs like “If You Peek in My Gazebo,” “Please Sell No More Drink to My Father” and “Lola’s Saucepan.” I never even saw the CDs and cassettes he had on hand, but they’ll be the first thing I look at when I get back underneath the Arlington.