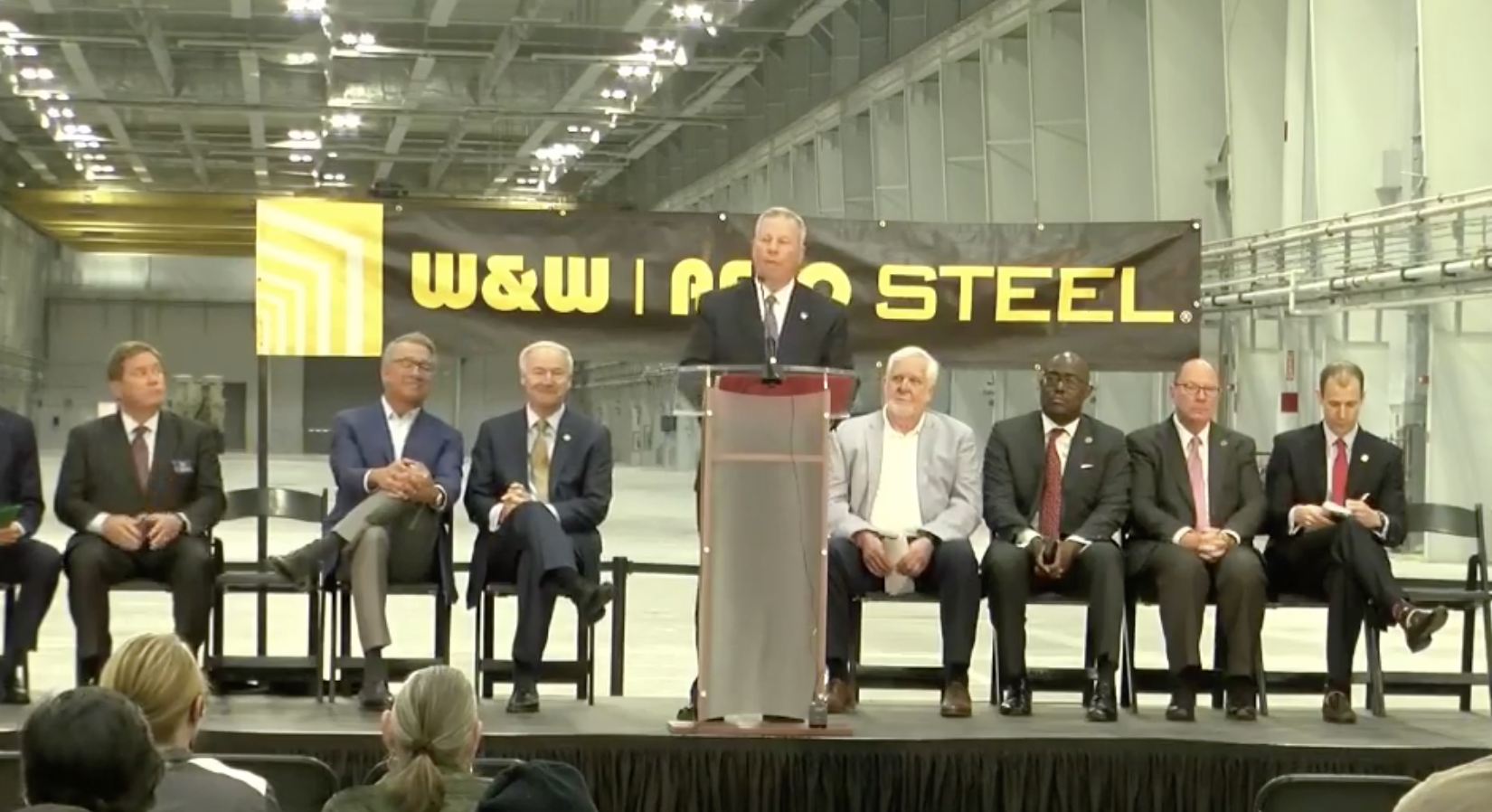 As I reported yesterday, the big industrial announcement was for a W&W AFCO Steel facility in the former LM Wind Power facility on Lindsey Road in the area of the Little Rock Port.

It will be the fifth steel production facility in Arkansas of what is now a worldwide steelmaker whose roots include Little Rock-based AFCO.

The announcement was made in the building where giant wind turbine blades were made until the plant closed in 2020. An Arkansas corporation bought the LM property, some 140 acres, that year and it will be leasing 40 acres of it, including this building to the steelmaker.

Governor Hutchinson praised the Arkansas regulatory environment for growth in steel industry in Arkansas. He claimed a plant can get built in Arkansas before it can clear the regulatory permitting process in Pennsylvania. He said he worried about environmental rules for major infrastructure projects being proposed by the Biden administration. He said they could slow down projects.

The company said the steel fabrication facility will represent an $18.7 million investment and eventually add 115 jobs over five years. Their products are used in bridges and commercial buildings. From a release:

“W&W|AFCO Steel is proud to announce this expansion in Little Rock. Our bridge operations are headquartered in Little Rock and we are happy to seize the opportunity to make a productive plant out of this vacant building,” said President and COO of W&W|AFCO Steel Grady Harvell. “The new facility will enhance our ability to continue providing competitive steel bridges to the state of Arkansas and the region as well as increase our production capacity for steel building products. We are happy to partner with AEDC, Little Rock, and the Little Rock Port Authority in this expansion.”

AFCO Steel was founded in Little Rock in 1909. The family-owned company was sold in 2002 to W&W Steel of Oklahoma City where it is now headquartered. Today, W&W|AFCO Steel is the largest structural steel fabricator and erector in the United States. The company now has 18 production facilities in 11 states covering 3.4 million square feet.

I’m checking on state and local financial commitment to the project. UPDATE: The state is providing only the rebate on sales taxes and incentives for job creation. Checking on any local contributions.

The remarks today included touts for further taxpayer investment in buying land in the port area for potential industrial expansion. Some in the real estate industry, noting some currently vacant land held by the port (such as for a failed gun factory), question whether adding purchases land is the best course. Why not take options on potential sites when a prospect is in hand.