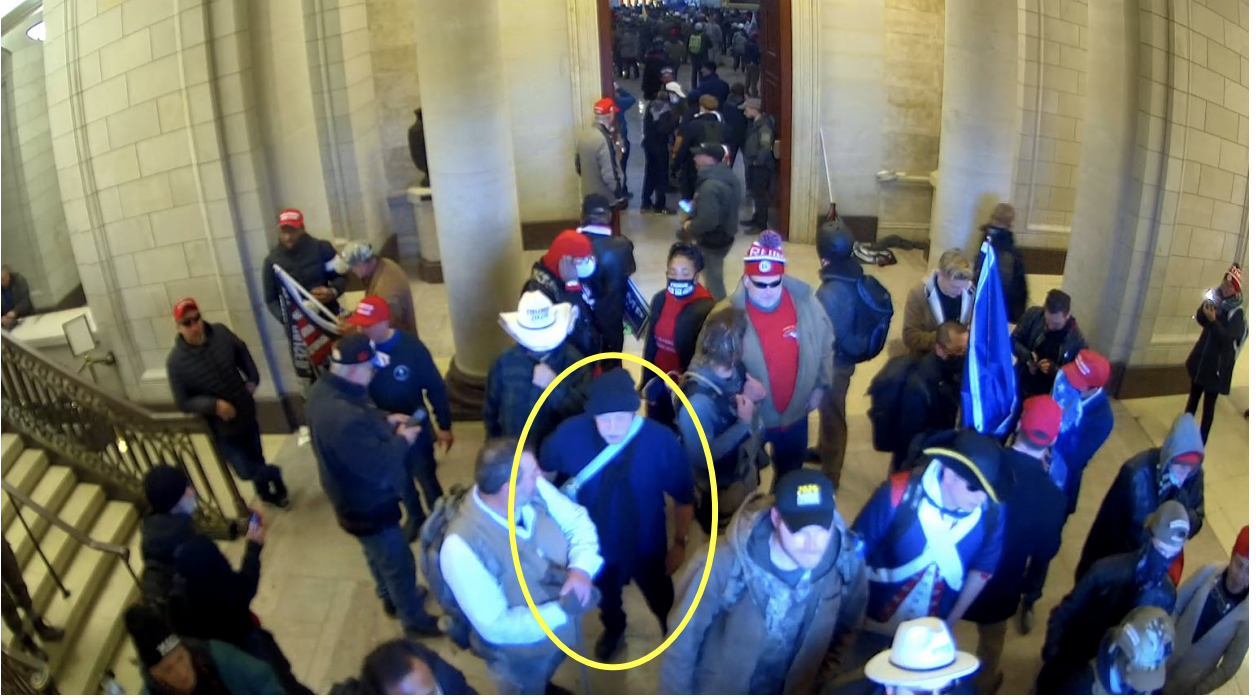 EVIDENCE: The charge against Snow included multiple security camera shots of him in the Capitol on Jan. 6.

Robert Thomas Snow, 78, of Heber Springs, pleaded guilty Thursday to illegal “parading, demonstrating or picketing” in the Capitol on Jan. 6, 2021.

It’s a misdemeanor punishable by a maximum sentence of six months in prison and a $5,000 fine. He will be sentenced on July 7 and remains free on personal recognizance. Here’s his plea agreement in which three other charges were dropped. Snow agreed to pay restitution of $500 as his share of almost $1.5 million in damage done to the Capitol that day.

The statement of offense filed Thursday says Snow was in a crowd that unlawfully entered the Capitol while certification of the presidential election was underway. He had hooked up with a group from Texas while driving to Washington and attended the “Stop the Steal” rally at which Donald Trump spoke before rioters breached security and began rampaging through the Capitol. Snow entered the Capitol about 2:15, about five minutes before members of Congress fled their chambers while talking on his cell phone. He walked through various parts of the building until he encountered Capitol police officers with guns drawn. They ordered him to lie on the floor, checked him for a weapon and then ordered him to leave the building. He exited at 2:58 p.m. He was charged on Dec. 29 after the FBI tracked his cell phone inside the building on Jan. 6.

When he was charged, documents released then said Snow had returned to the building after exiting and urinated on a column in an area he thought to be a cafeteria before leaving again. That wasn’t mentioned in the statement of offense filed Thursday. Snow had denied that description of what he’d done in an interview with Fox 16 and also said he had done nothing disruptive.

ROBERT THOMAS SNOW knowingly and voluntarily admits to all the elements of Parading, Demonstrating or Picketing in a Capitol Building pursuant to 40 U.S.C. 5104(e)(2)(G). Specifically, SNOW admits that he willfully and knowingly entered the U.S. Capitol building knowing that he did not have permission to do so. SNOW further admits that while inside the Capitol, he willfully and knowingly paraded, demonstrated, or picketed.

Snow told the judge in a teleconference hearing Thursday that he’d completed four years of college undergraduate work and two years of graduate school, according to an account by Bill Bowden in the Arkansas Democrat-Gazette.