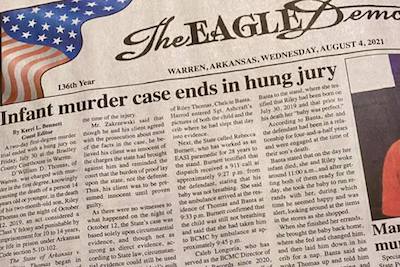 Another newspaper, a venerable one, bites the dust. The Warren Eagle Democrat – Arkansas Times


The Saline River Chronicle, an online news source based in Warren, provides news of the end of the Eagle Democrat, Warren’s hard copy newspaper, on March 30.

The closing will bring to an end one of the oldest businesses in Bradley County. Published since 1885, The Eagle Democrat has served the community of Warren and Bradley County with distinction. It has covered some of the most iconic moments of Bradley County History, from the devastation of the 1949 and 1975 tornadoes, to the 2001 Warren High School Football State Championship.

The paper has been owned by various individuals over its storied history, but most recently it has been in the hands of Danny and Pam Cook. They have successfully operated the publication for over two decades.

I’ll remember it, as Rob Reep did in the Chronicle, as the late Bob Newton’s newspaper.

After college, Newton began a journalism career that led him to Warren, where he became an editor in 1957. He began purchasing ownership of the power that same year, eventually becoming its sole owner, selling the paper to the Cooks in 1998. He wrote a popular column for years.

An article published in the March 23 weekly Eagle Democrat announced the end of publication next week, the Chronicle reported. The Eagle Democrat doesn’t have a website that I can find and its Facebook page hasn’t been active recently.