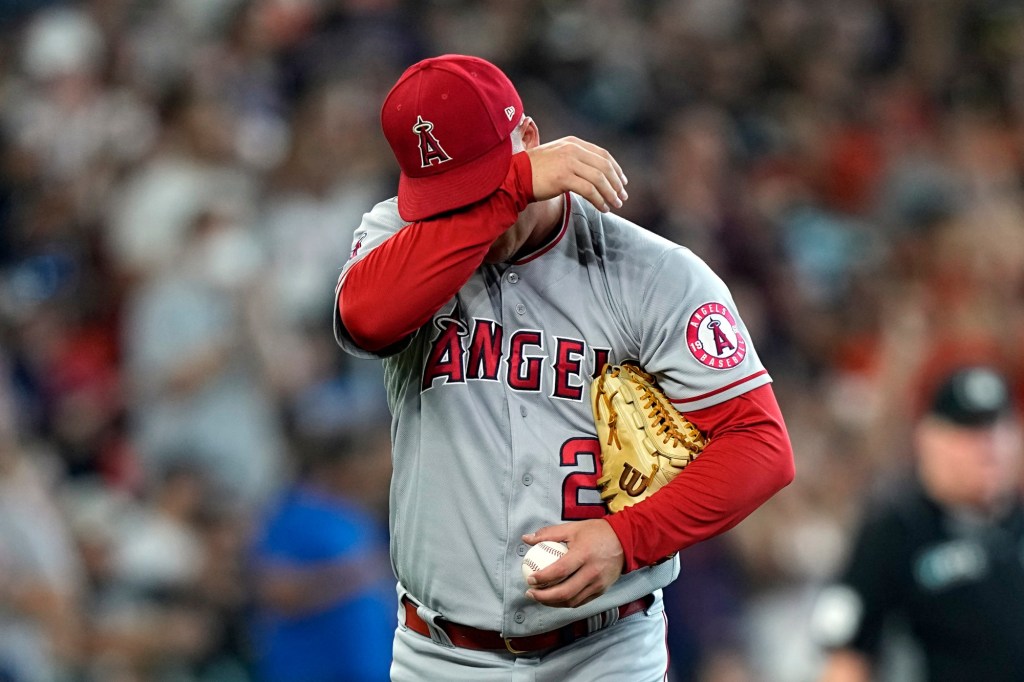 HOUSTON — For a moment in the Angels’ 9-1 loss to the Houston Astros on Saturday, they had a chance to get back into the game.

Although they trailed by four runs in the fifth inning, they had two on and Mike Trout coming to the plate, with Shohei Ohtani behind him.

Trout whiffed at two straight fastballs from José Urquidy, and then he took the third, which nicked the top of the strike zone, ending the Angels’ best threat.

It was the third of Trout’s four strikeouts in the game, a day after he struck out in all three of his plate appearances.

It was the first time in Trout’s career that he struck out at least three times in back-to-back games without reaching base in either game.

“Just losing my posture up there,” Trout said. “It makes my swing long. Just grinding through some stuff with the lower half. It’ll be alright.”

Trout has hit 23 homers and has a 1.010 OPS, numbers that still rank his overall performance among the best in the game. But within that he’s endured some uncharacteristic slumps. He had a career-worst 0-for-26 drought earlier this season. His 29.3 strikeout percentage is the highest of his career.

His performance Saturday was just one piece of another ugly day for the Angels.

They managed just three hits and struck out 12 more times, adding to their major league-leading total. They had two hits and 16 strikeouts in an 8-1 loss Friday night.

Andrew Velazquez thought he struck out two pitches in a row. In the third inning, he had checked his swing on a two-strike pitch. Velazquez started walking back to the dugout, seemingly unaware that third-base umpire Bill Miller had ruled that he didn’t go around. Velazquez then was called out on strikes on the next pitch.

Sandoval gave up a double to José Altuve to start the first inning. He recorded two outs without allowing a run, but then allowed an RBI single to Kyle Tucker, a walk to Yuli Gurriel and a two-run single to Jake Myers.

In the second, Sandoval gave up a first-pitch homer to Martin Maldonado. Altuve then doubled and scored on a two-out broken-bat hit by Alex Bregman, putting the Astros up 5-0.

Although Sandoval equaled his season-high in runs allowed, he managed to shut out the Astros over the next three innings to hold the game within reach and also keep the bullpen from being overextended.

“I just made an adjustment,” Sandoval said. “Five runs too late, but worked out for the last three innings.”

Sandoval said he adjusted both his location and his pitch usage.

“They’re just a good fastball hitting team and some two-strike pitches I left a little too much of the plate, too much up,” Sandoval said. “I just have to be more fine with my two-strike pitches and mix up what I was doing before I got to two strikes.”

Once the bullpen did come in, it got worse.

Andrew Wantz allowed homers to Maldonado and Altuve in the sixth, and Aaron Loup gave up a homers to Tucker and McCormick in the seventh.

After the blowout loss was complete, the Angels (37-43) fell to six games under .500, with one game to go before the midpoint of the season. They are 5-1/2 games behind the Tampa Bay Rays for the third wild card spot, although there are four other teams between the Angels and Rays.

“We have a lot of games left,” Trout said. “I’m very confident this group. The guys come in here wanting to win, wanting to do whatever is best for the team. It just wasn’t going our way these last couple days.”