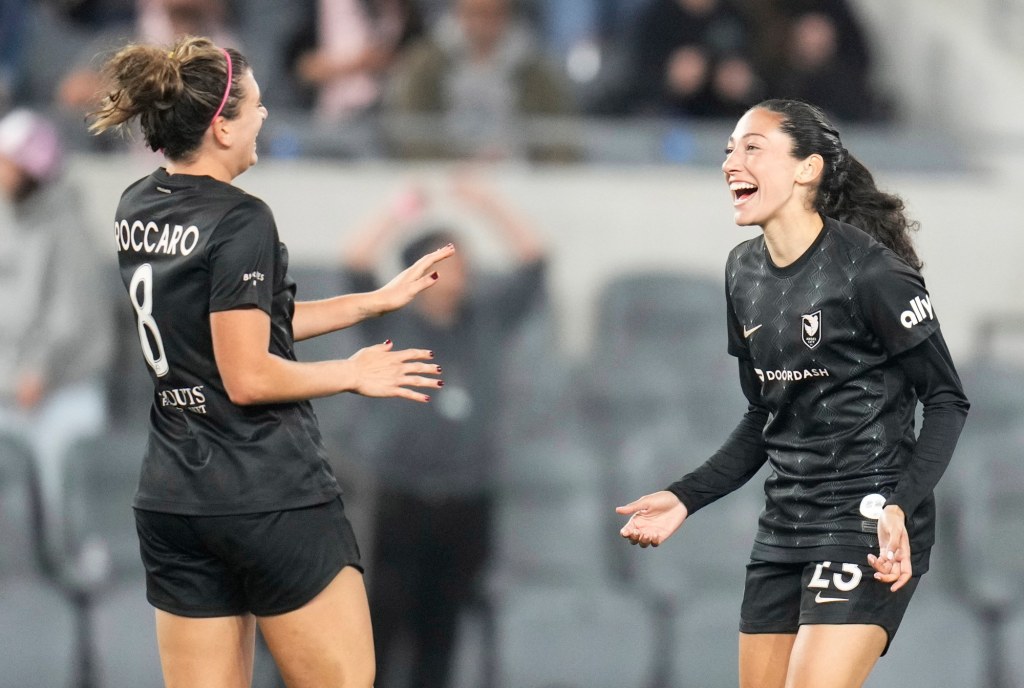 Last week’s debut for Angel City FC took the players and everyone involved with the club through various emotions.

Thanks to two first-half goals and a strong defensive effort, Angel City won its regular-season opener in front of a sellout crowd of 22,000 at Banc of California Stadium.

“For me, to walk in there and see the stadium already start to get packed, I was super-stoked for that,” Angel City goalkeeper Didi Haracic said. “It was awesome, and as a team, we were just stoked to see what the stadium would look like. I’m really excited to get started on Sunday.”

On Sunday, the club will host Orlando Pride in the second game of the regular season.

This could be the start of things getting back to normal, but for an expansion team with the following that Angel City already has, maybe nights like last Friday is the new normal. Team officials are expecting another sellout crowd.

“I think we’re going to take it (the season) one by one, each game,” Haracic said. “I think the common feel throughout our group is that atmosphere from Friday night, we’re blessed to be part of that for the rest of the season.

“I think it’s a matter of, this is our home, we want to make it difficult for teams to come in and play in this arena. If we can have great results in this arena, that’s the goal and obviously another focus is how can we keep those results going in away stadiums.”

Angel City is playing four of its first five games at home, which should allow for the camaraderie to further develop on the field.

The atmosphere Friday, though memorable, also made things a bit difficult for Angel City to communicate on the field.

“It was great to get one game under our belt here at home so now we know what to expect for this weekend,” Haracic said. “I would say the hardest thing was hearing each other on the field. At halftime, we discussed what can we do and it was more so making eye contact, reading each body language and trusting each other.

“Going into this weekend, I think that’s going to be another important thing because we know what to expect from our atmosphere. But don’t get me wrong, I don’t want the fans to quiet down. That’s part of the game and I think it hyped us up too, so I’m all about it.”

The Pride, coached by former UCLA coach Amanda Cromwell, arrives in L.A. having suffered a 3-0 loss to NY/NJ Gotham FC last week. The Pride allowed the goals in a 12-minute stretch in the first half.

“I think it is important for us to recognize and acknowledge what a great event, game and performance we put in last week to beat a good North Carolina side,” Angel City coach Freya Coombe said. “It’s really important that we know that it was one game of a whole season and now as soon as that game was over, it’s time to turn our attention to our next opponent and making sure we are prepared and we’re looking just to take it game-by-game and making sure that our performances match and not dwell on the events of last week.”

Where: Banc of California Stadium