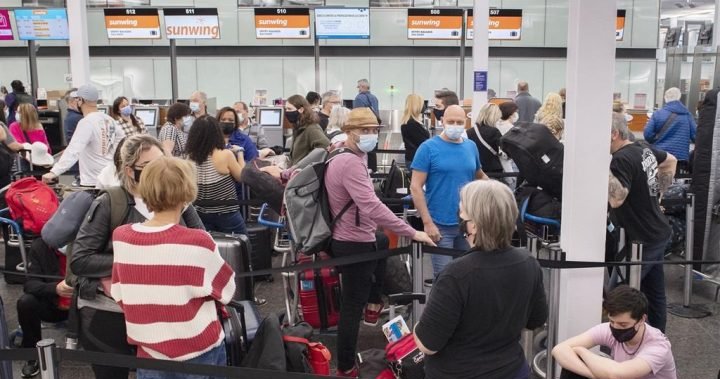 Several Maritimers remain stuck abroad unable to return home as Sunwing Airlines continue to deal with a system glitch that has delayed dozens of flights.

Renee Van de Ven of Fall River, N.S., headed out on a vacation to Puerto Plata, Dominican Republic, with her boyfriend last week. She says everything went great, until the night before they were scheduled to leave.

“We kept looking online and every time we looked, the (departure time) kept getting pushed,” said Van de Ven, who as of Thursday afternoon was still stuck in the Dominican. “The Sunwing rep wouldn’t give us any information.”

On numerous occasions, Van de Ven says her departure time was delayed. She’s now been trying to leave for over 30 hours.

“The communication from Sunwing has been absolutely zero. Nobody has been telling us anything,” she said. “Now I’m going to need a vacation from this vacation because the last three days have been an absolute nightmare.”

It’s all because of a data security breach Sunwing Airlines Inc. has encountered, which is impacting the check-in and departure process. The disruption has grounded flights and left thousands of travellers isolated in airports.

In a statement on Wednesday, a spokesperson for the Toronto-based airline said they continue to manually process as many flights as possible to minimize service disruptions.

“We are also actively working with other air carriers to source additional aircraft to help relieve the backlog in certain destinations,” the statement reads.

Margie Lewis of Cornerbrook, N.L., was also impacted by the breach. She went to Mexico for her cousin’s wedding just before the Easter long weekend.

Lewis says after boarding her plane, it never left. After three hours, she was told to get up and get on a bus, which would take her to a local hotel for the evening.

“I was prepared for delays to a degree, but not this degree,” she said. “And I wasn’t prepared to be totally dismissed and ignored.”

After getting off the plane, the bad luck continued. Lewis says as she was getting off the bus towards the hotel lobby, she fell, breaking her laptop and injuring her wrist. She’s looking for Sunwing to compensate her for the damages.

“Basically, we were abandoned,” she said. “There was just no care for us. There was no concern.”

Van de Ven is seeking compensation, too. She says the delay has resulted in her missing three days of income, which she feels Sunwing is on the hook for.

“That’s been the most frustrating part is that Sunwing will not communicate with us, and when they do they just say, ‘We’re working on it,’” she said. “I want compensation for the 48 hours we’ve been stuck in Dominican with no information whatsoever.”

In its statement, Sunwing said, “Passengers with flight delays over three hours will be compensated accordingly,” but did not provide details on the compensation.