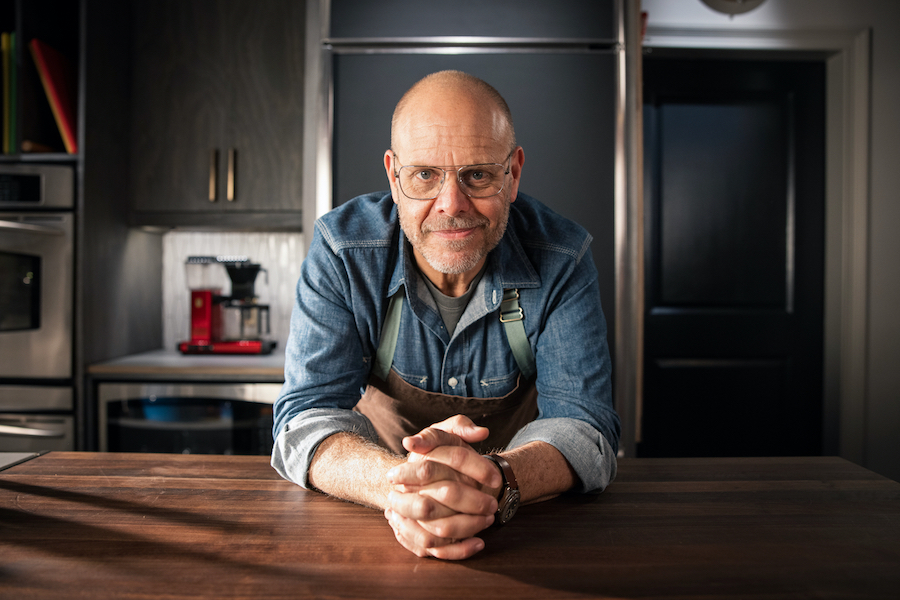 Alton Brown — the television personality behind “Cutthroat Kitchen,” “Iron Chef America” and the long-running “Good Eats” — is known to most as a science-minded cook with a razor-sharp wit and an enduring disdain for single-use kitchen appliances. As a perpetually broke college student in the early 2000s, I burned through bootlegged video files of “Good Eats” (sorry not sorry, cable company), gradually improving my techniques in the kitchen with Brown as mentor — throwing tortilla chips into a slow cooker aside hunks of stew meat to thicken my chili, marinating slices of red potato in vinegar before fashioning them into picnic potato salad, and assaulting my neighbors with the smell of liquid smoke wafting from a box fan rigged up with bungee cords and air-conditioner filters to make homemade beef jerky. I spoke with Brown ahead of “Beyond the Eats,” a culinary variety show going up at Robinson Center, 7 p.m. Wednesday, March 30. Get tickets here.

You strike me as someone who’s not going to be content recycling material ad infinitum – like when “Good Eats” and “Good Eats: The Return” ended, I’m guessing you felt like, “I’ve said what I wanted to say in this format.” What does “Beyond the Eats” do that is maybe a little different than your previous projects?

Well, my stage projects aren’t anything like my TV projects. That’s one of the whole points. There’s absolutely, positively no recycling of anything! This is my third stage show. So I had the “Edible Inevitable” tour back in 2013, ‘14, ‘15. Then I had “Eat Your Science” in 2016, ‘17, ‘18. And now “Beyond the Eats.” And the thing that they have in common is that I treat my stage shows as standalone culinary variety shows. They have more in common with Vaudeville than they do with television. The way they’re structured is that they have comedy, live music, and in “Beyond the Eats,” there’s an entire game show buried in the middle of it, with contestants on stage. The second act is all taken up with a very large, very unusual culinary demonstration, and a couple of very unusual and very large, um … mechanisms. I tell everyone when we start the show that this is two hours of what they won’t let me do on television. So this is not “Good Eats: Live.” This is not “Cutthroat Kitchen: Live.” This is not “Iron Chef: America” live. This is always brand new stuff that had never before been seen by human eyes.

I want to ask about Quarantine Quitchen. So I did not know about this series, and happened upon a martini-and-F-bomb-fueled Election Night episode – “poised on the cusp of Armageddon,” I think you say at one point, and then the very first episode in which you are trying things out in real time – I think you clean the camera lens with your shirt somewhere in there.

Yeah, it is about as low-fi grunge as you could imagine. Elizabeth, my wife, and I literally decided one night just to turn on YouTube. And by the end there were about 7,000 people watching, and we thought, “Well, let’s do it again next week.” And then it became a thing. Gosh, there are probably around 100 of them over the two years of lockdown, almost always on Tuesday nights, always live, always completely – We just don’t prepare anything! And that’s the whole point. We drink. I cuss. It’s racy. It’s very grown-up – it is not for kids. And it’s also turned into a sort of date night for us. Elizabeth and I are very busy people and being able to stop everything and have a cocktail party with a bunch of strangers has become something that got us through.

It’s really satisfying to see someone who’s such a fan of structured TV and snappy edits and good lighting decide to turn on the camera and let it roll and hang out.

Yes! We debated upgrading. We thought, “We could get a camera person in here,” or “We could actually shoot this on a real camera instead of a phone,” and then thought, “No, we don’t wanna do that.” The only thing we added were a couple of lights, because it was dark in there. There’s no budget, There’s no planning. Which is very unlike the rest of my world. It’s the antithesis. And also the antivenom, in a way. It’s been fun being so naughty.

Elizabeth Ingram, your wife and an accomplished interior designer, seems to have zero qualms about jumping into a situation where she’s an on-camera personality. Was there a conversation about that at any point?

We didn’t talk about it at all. [Laughs.] We probably should have. It’s had some very strange side effects in our life. Not drawing any lines or having any boundaries has been interesting because now I’m doing this live tour show, and for the first time Elizabeth’s here on stage playing bass and taking part in other things in the second act, and you wouldn’t believe how people cheer for her! And she’s completely taken aback by it. This is not her world. She’s getting used to it, but the first time she went out there and people yelled her name, she was like, “OK, I can’t. This is weird.”

The second thing I wanted to ask is: You’re such a fan of economy in the kitchen – why do you have so many seemingly identical cast iron skillets hanging on the wall?

None of them are identical! That’s not about economy in the kitchen. It’s a collection. They may look identical, but they’re from different makers. There are a lot of Griswolds in there, some old Lodges.

So you’ve filmed plenty of work that connects food with the open road – “Feasting on Asphalt,” most notably, but what about the meals that weren’t for the camera? What do you eat when you’re traveling? I’m assuming a tour like “Beyond the Eats” has craft services and if so, do you get any say in what you’re having for lunch between stops?

We used to be able to make quite an effort to go out and about in communities to find the food people think we should eat. We even had a social media program called AB Road Eats where I ate only what people suggested. That has been a lot tougher to do during COVID times, because our rules don’t always let us out. Dinner? We don’t get dinner; we’re doing a show! But occasionally we can get good local breakfasts or can sneak out and grab a lunch, and we try to take those recommendations from fans who are in the area.

Second, a pop quiz: Let’s say someone who doesn’t have that at their disposal is on the road and has to cobble together a meal from the shelves of a gas station/convenience store. What are you gonna eat?

I’ve done that plenty! First off, I always travel with a few things. Basics that we can cobble meals together around. There’s always, for instance, canned fish and eggs, which are wonderful things you can use to bring meals together. You walk into a gas station or a truck stop, and there’s always ramen. There are always nuts. But there’s not usually, you know, parmesan cheese. We travel with some cheese and some decent oil. Soy sauce and some kind of decent vinegar, and with that you can make almost anything happen. We’ve made salads out of pork rinds, and thrown all kinds of things into scrambled eggs. Sliced-up Slim Jims. In one place outside of Albuquerque they had bags of fried crickets, so we put fried crickets in a frittata. Vegetables are typically the hard find. We keep some canned chickpeas and rice around — things that will keep your insides from falling out.

So your past contestants on “Cutthroat Kitchen” can rest assured you’re not asking them to do anything you haven’t done, really?

I do not tend to cook in miniature kid kitchens while wearing diapers. Those aren’t things that I’ve done. But I have faced a fair amount of missing ingredients, cooked oatmeal in hotel coffee makers, that kind of thing.

You are a fan of timepieces – vintage watches. What’s appealing to you about that machinery when you have a phone that will tell you the time at any point you desire?

Oh, gosh. This is a very complex issue for me. It’s been a thing my whole life. When I was a little kid, I was all over watches and wanting to be involved with watches and being fascinated with the mechanics behind it, the science behind it, the world of gears and springs hidden away. But then it also becomes this statement of aesthetic principles. I’m constantly trying to figure out who I am through watches, and also really wrapped up in their history.

If you ever switched to a career that had nothing to do with film or food, would it be something mechanical like watchmaking?

You are a fan of good songwriting, I take it from you and Elizabeth’s cover of “Lawyers, Guns and Money.” What are you listening to right now?

Most of what I’m listening to right now is the playlist that Elizabeth put together for the house music that plays for an hour or so before the show goes up — like ‘60s and ‘70s police and spy show themes that I’m completely addicted to.

Do you guys jam at home?

Yeah, at least a couple times a week. I’m late coming back to guitar playing after being away from it for 30 years, and Elizabeth’s still learning. She’s only been at it for a couple of years. So we’ve got a long way to go.