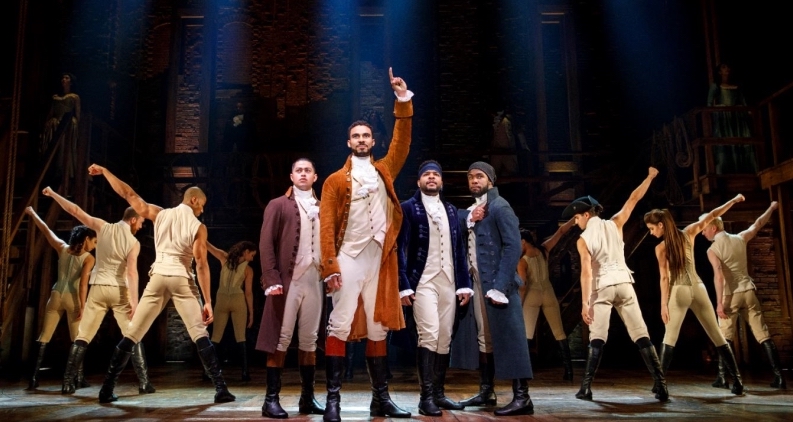 This review is brazen cruelty, because “Hamilton,” which runs at Little Rock’s Robinson Center through Feb. 20, is largely sold out. Unless you tweak your schedule and sink your budget right quick to nab one of the few remaining open seats, you will have thrown away your shot.

To my fellow rubes who somehow caught only snippets of Lin-Manuel Miranda‘s masterpiece since it first blew Broadway’s face off in 2015, you should know that the hype is legit. If vendors sold tricorn hats and brass-buttoned dusters on the sidewalk outside after the show, I would have gladly juiced Alexander Hamilton’s cleverly devised Treasury Department by shelling out for a full get-up.

Imagine it: stuffy history made awesome with rap, spoken word and sexy choreography, spun out on a gigantic lazy susan that loops performers around fast enough to give the entire stage a snowglobe effect, but slowly enough to not induce seasickness.

My date for the show was my 10-year-old son, and I wondered beforehand if he would be confused to see our pasty and bewigged founders portrayed by a melting pot cast of triple threats. That was a waste of anxiety. Three seconds in, we were all in. “Hamilton” creator Miranda famously described his show as “America then, as told by America now.” And it’s so much better this way. Scrap George Washington’s weird powdered hair and primative dentures and it’s easier to focus on what Washington does instead of what he looks like. Played by the statuesque Black actor Paul Oakley Stovall, who seemed to always stand a full head taller than anyone else on the stage, the scrappy bravery and hard-won wisdom of our first president shined through.

Plus, haven’t we all seen enough of white dudes? To be honest, the Founding Fathers have been on my shit list lately. The Revolutionary War seemed intense, and it’s admirable that they stuck it out and then set to building an entirely new government from scratch. Absolutely. But all the reverence for this pack of slave-holding misogynist adulterers is a bit much. Nobody loves freedom of the press more than I, but they also stuck us with some lemons. Punting on slavery? Come on.

“Hamilton” is the PR campaign the founders need. They’re no more likeable when the lights go back up, but they’re certainly more accessible, their stories more relatable. Tyler Belo‘s bawdy and swiveling performance as James Madison doesn’t make up for that garbage Second Amendment Madison stuck us with. But watching this exceptionally talented cast plunge adrenaline into the hearts of historical figures we’ve always assumed were wooden bores opens up possibilities I had not considered. For the first time, I can see how swilling a tankard or two at a public house with fellows in tights and knickers would have been a good time.

The performers were phenomenal across the board, never even tripping over their tongues on Miranda’s complicated and compact lyrics that leave no space for breathing. David Park killed as Marquis de Lafayette in the first act and Thomas Jefferson in the second, shooting out impossibly complex rhymes with zero stumbles. Give him a perfect 10 for this triple lutz of tongue twisters:

“I’m in the cabinet, I am complicit in
Watching him grabbing at power and kiss it
If Washington isn’t gon’ listen
To disciplined dissidents, this is the
difference:
This kid is out!”

Whew. We hear there are some tricks of the trade for delivering these labyrinthine lines on time.

My only quibble is that the show ended before I got my fill of the female performers. Obviously the United States’ baked-in toxic masculinity is to blame here. And it’s exciting that Miranda has said he’s open to women playing some of the male characters’ roles. Think of it! Lencia Kebede’s performance as Angelica Schuyler mesmerized, but we’ll never be satisfied until we see her in the title role.

There might be a few seats left if you hurry. If you’re lucky enough to literally win the lottery, you can score $10 tickets here.

The post A rube’s guide to “Hamilton” appeared first on Arkansas Times.