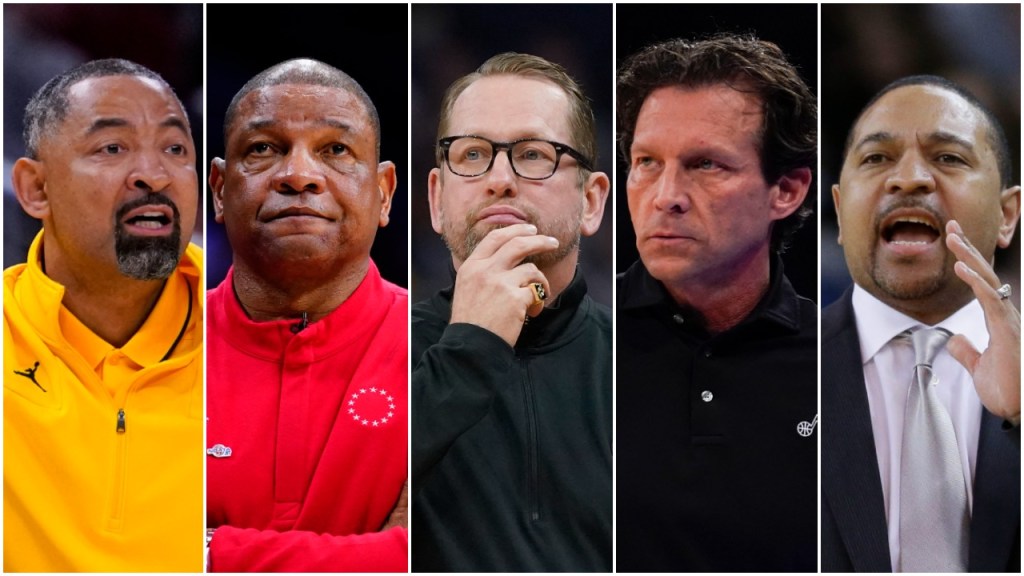 Coaching searches are a flat circle.

Three years ago when the Lakers were looking for a new head coach, Southern California News Group put out a list of five possible candidates (none of whom were Frank Vogel) who were linked to the job by media reports. Fast forward to the search for Vogel’s replacement: Three of those names have resurfaced, because in an already small NBA coaching world, there are even fewer people who are widely seen as capable of handling all the pressure of leading the Lakers and LeBron James.

With Vogel, the Lakers sought a defensive mind who could instill schemes that would help propel them to championship contention, and that blueprint worked in Year 1. But after two years of shortcomings – some of which were beyond Vogel’s control – the Lakers are looking for a charismatic presence in the locker room, which was not Vogel’s strength.

“We want a strong voice that’s able to inspire the players to play at the highest level of competition every night,” General Manager Rob Pelinka said Monday. “And I think that’s going to be one of the resounding qualities that we look for in terms of holding everybody from the top player on our team to the 15th man to a degree of accountability.”

With a process that Pelinka described as “methodical” that the franchise hopes to have finished before the NBA Draft on June 23, here are a few candidates who have been mentioned in media reports (obviously a dark horse can emerge later, as Vogel did):

Ties to the Lakers: Who doesn’t Doc Rivers know? An NBA lifer, Rivers has relationships around the league and has faced the Lakers (and LeBron James) plenty of times as an opponent. He coached in L.A. for seven years for the crosstown franchise, but he has ties to the region beyond that.

The case for Rivers: A top-10 all-time coach in wins, the 60-year-old Rivers has the gravitas that the Lakers have targeted as a key trait. He has a presence in the locker room, a presence in the media and when he speaks, he’s heard (gravely though his voice may be). He has as much experience as you could want from a head coach, his teams are typically physical and defensively competitive, and he has won at the highest level.

Possible hurdles: In a running theme of this list, Rivers is already a head coach. His 76ers are hoping to make noise in the playoffs with MVP candidate Joel Embiid and James Harden. If they succeed, it’s hard to see the 76ers wanting to get rid of him. But even if Rivers and the 76ers somehow part ways this offseason, there are fissures in Rivers’ style that have caused him to burn out over time in various markets, such as his rigidity around certain lineups and rotations (ask Philadelphia fans about DeAndre Jordan’s minutes). He underachieved with perhaps the best Clippers teams ever, including the infamous 2020 “bubble” run that led to his dismissal. Also, one wonders if Rivers’ outsized personality would clash with James’, or Russell Westbrook’s in the event that the 33-year-old remains with the Lakers.

Ties to the Lakers: Snyder is a former Lakers assistant from the 2011-12 team who still knows a lot of people within the organization.

The case for Snyder: Snyder is an incredibly intense, analytical mind who helped turn around the Jazz franchise in steady fashion, helping them become a regular-season winning machine. He’s had the tutelage of Gregg Popovich and Mike Budenholzer, and there are few coaches more respected in terms of X’s and O’s. There are power struggles within the Jazz franchise – which recently brought in former Celtics honcho Danny Ainge – that could result in Snyder’s exit from Utah, even though he’s been successful there.

Possible hurdles: Beyond the report that Snyder might have been turned off by the nature of Vogel’s firing this week, there are natural concerns. For one, as a head coach, Snyder has never advanced past the second round of the playoffs – his team faltered last year against the Clippers even after Kawhi Leonard was injured. It’s also hard to imagine Snyder’s fastidious, type-A culture playing out the same way in L.A., which is star-driven rather than coach-driven. He would likely have to learn how to compromise a little more with a star like James (though he earned the respect of Kobe Bryant). If Utah chooses to retain him past this season, is he successful enough that the Lakers would trade to get him? They don’t have a lot of draft stock as it is.

Ties to the Lakers: If the Lakers manage to hang on to assistant Phil Handy, Nurse has coached alongside him before in Toronto where they won a championship together. Nurse is represented by Klutch Sports, which obviously has a voice in the Lakers’ organization.

The case for Nurse: If there was a chance to make this pairing, it would make a lot of sense. There are few coaches quite as schematically inventive as Nurse, who experimented in college, coaching professionals in England (including Handy) and won at the G League level before catching on the NBA. He won a title in his first season with the Raptors, came up short in the “bubble,” then suffered through one of the weirdest seasons in NBA history when his team played in Tampa Bay. He’s the master of adaptation, plays a tough style to match up against, and has a kind of folksy presence that his players seem to respond to.

Possible hurdles: Again, if the Lakers want a head coach who is currently under contract, they have to trade for him. That’s a tough place to start. Nurse is under contract for two more years in Toronto, and they don’t seem ready to part with him with the Raptors back in the playoffs. The Lakers’ organizational dysfunction might also be a drawback for Nurse, who works for one of the most competent executives in the league in Masai Ujiri. If the Lakers are looking to pay below market value (as they tried to do with Ty Lue before hiring Vogel) and assign him assistants (as they did for Vogel), why would he bother?

Ties to the Lakers: It’s almost a rite of coaching searches that Jackson’s name is mentioned, and he’s come up at least three times for LeBron-coached teams. Jackson calls a lot of games in L.A. as an analyst.

The case for Jackson: A former player-turned-coach-turned-analyst, Jackson has been around the game for a long time, knows the rhythms and intensity of playoff basketball, and commands a certain kind of respect. He has good relationships with players and other people throughout the league. In his only coaching role, he helped turn around the Golden State franchise and grow the Steph Curry, Klay Thompson and Draymond Green young core.

Possible hurdles: It just seems telling that a man who comes up annually as a coaching candidate hasn’t actually worked as a coach since 2014. It’s been eight years, shouldn’t someone have given him a shot by now? Working against Jackson is the immediate success that Steve Kerr had when he walked into Golden State, winning three championships there and making five consecutive Finals appearances. There are also anecdotes about Jackson’s leadership there that are less-than-flattering. It doesn’t have to be the Lakers who make the gamble that he has changed and is ready to coach a contender almost a decade after his last job.

Experience: Six seasons as an assistant coach with the Miami Heat under Erik Spoelstra, with three playoff appearances in that span, including one Finals appearance; three seasons as University of Michigan head coach (61-32 record) with Sweet 16 and Elite Eight finishes.

The case for Howard: As a player, he was incredibly accomplished and played for Don Nelson, Jeff Bzdelik, Jeff Van Gundy and Spoelstra. He became respected as an assistant (he interviewed for the Lakers job in 2019) but got hired at Michigan, where he is a legendary member of the Fab Five. There, he has re-established the Wolverines as an annual March threat and shown capability as the top guy. He’s a voice that James would listen to and that, theoretically, Pelinka would collaborate with closely in roster-building.

Possible hurdles: There is family to consider. Howard coaches his son Jace, and his son Jett is committed to the Wolverine program. He is coaching at his alma mater, where he’s already had success in a short amount of time. If Howard wants to make the NBA jump, the Lakers are deep, deep water. For the Lakers, does Howard have the experience to justify putting him in the top spot? Is he ready to clash with James (and possibly Westbrook)? If he becomes the head coach, what is his identity schematically? Earlier this season, Howard striking another coach and getting suspended didn’t reflect well on him. There are a lot of unknowns with Howard, as friendly as he might be with the top personalities in the organization. He’s someone the Lakers would likely require to take on assistants of their choosing.