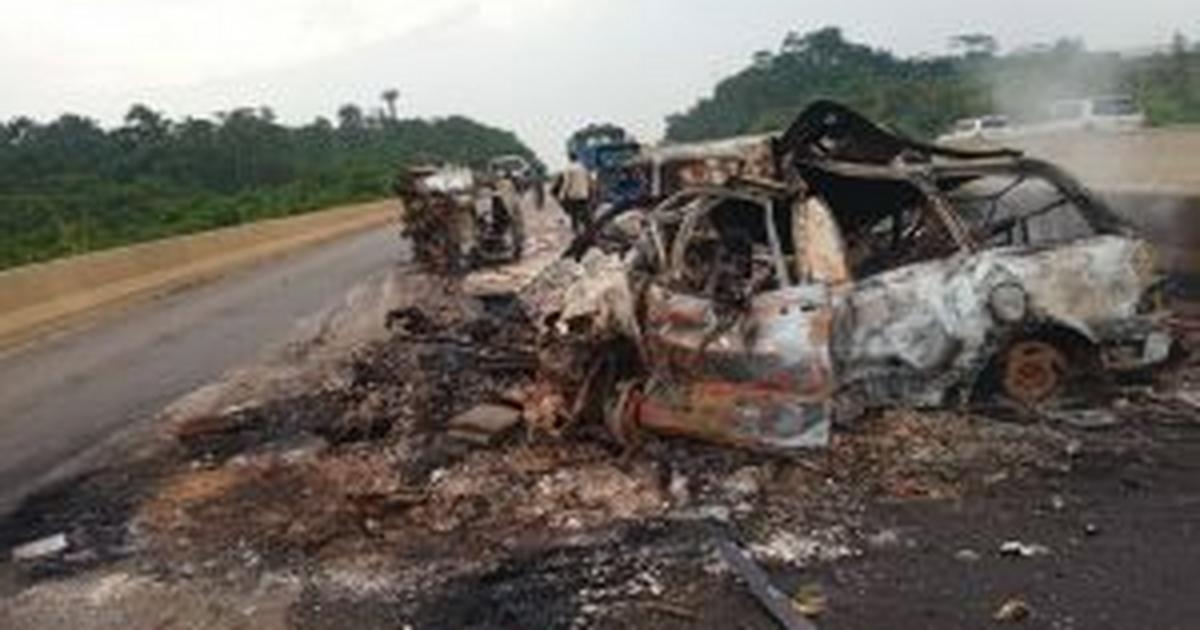 Kazeem said the accident which happened around 10:20pm after the Isara bridge involved about 25 persons.

He explained that the accident was caused by Road Traffic Violation (RTV) with over speeding which led to a multiple and fatal accident thereafter.

According to him, out of the 25 people involved in the accident, six males, one Female and one male child were identified while 17 others are unidentified.

“The collision of the two Mazda buses with unidentified colours and registration numbers with the Previa bus, resulted in a explosion which involved all the three vehicles.

“However, seven out of the two Mazda buses on the right lane survived while others were caught up in the inferno and got burnt beyond recognition.

“And those in the Previa bus which had assumedly committed the road traffic violation got burnt beyond recognition,” he said.

Kazeem said that four more charred bodies were found while clearing the obstructions, adding that an unburnt body was also found on the Lagos-Ibadan expressway opposite the crash scene.

He said that obstructions had been cleared and traffic diversion closed, and that free flow of traffic had been restored.

He quoted the Corps Marshal, FRSC, Dr Boboye Oyeyemi as saying that motorists should avoid night travels, adding that life had no duplicate, hence the need to drive with caution.

Oyeyemi said that road traffic violations and speed, heightened the spate and fatalities of road traffic crashes during night travels.

He advised all road users to endeavour to drive safely to save the lives of other road users by adhering to all road traffic rules and regulations.

The FRSC boss assured that the corps was working effectively to ensure a significant shift in the attitude of motorists and all road users across the country.